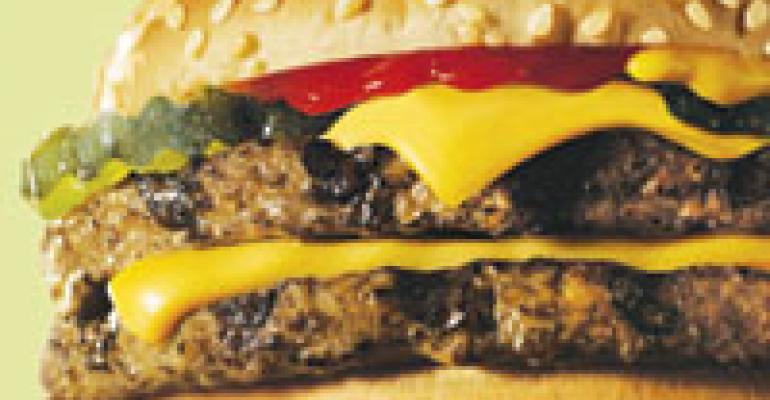 The quick-service value deals just keep on coming, and operators don’t expect them to end any time soon.

Most recently, Burger King entered the $1 burger battle with news that it would roll out a $1 double cheeseburger to all U.S. locations on Oct. 19. A few days later, Jack in the Box unveiled its new Bonus Jack Combo Meal, which features a double-patty cheeseburger along with a small order of fries and a small drink for the suggested price of $3.99.

The new offerings will compete with McDonald’s Dollar Menu, which includes the McDouble sandwich, and Wendy’s 99-cent specials, including its Double Stack, as well as the proliferation of premium burgers, like the Big Carl at Carl’s Jr., muscling their way onto fast-food menus as operators work to enhance their value messages with both low-cost and more upscale items.

As consumers continue to battle against recessionary pressures, not the least of which is rising unemployment, deals are crucial to winning customer traffic—even as operators question whether pervasive discounting will affect perceptions of quality, or spoil consumers to the point where low prices or value-driven deals will be required for the long term.

“Bottom line is, you are going to see significant discounting continuing in QSR,” said Alan Vituli, chairman and chief executive at Carrols Restaurant Group Inc., the largest Burger King franchisee, during the company’s latest conference call in August. “We believe that Burger King’s strong value proposition coupled with a renewed focus on value advertising can and should resonate with consumers in the current economic climate.”

According to research from The NPD Group, when consumers who had cut back on restaurant visits were asked what would entice them to go to restaurants more often, they listed discounts, coupons for a free item, more dollar menu items, a choice of price offerings and other cost management options. The largest percentage of respondents, 31 percent, wanted price discounts on regular menu items, while 24 percent wanted coupons for free items and 23 percent wanted $1 or 99-cent offerings.

“It’s going to be awhile before the industry can move away from deals and other customer incentives,” said Bonnie Riggs, a restaurant industry analyst at The NPD Group.

At Miami-based Burger King Holdings Inc., the operator or franchisor of 11,924 locations worldwide, the decision to launch the $1 double cheeseburger was a long time in coming.

In July, reports surfaced alleging tension between the franchisor, which wanted to spark sales with the debut of a $1 double cheeseburger, and franchisees concerned that the $1 price point would erode their margins.

The company noted, however, that tests of the product have been successful.

Burger King has suffered a sales slowdown in recent months, posting a 4.5-percent drop in systemwide same-store sales for U.S. and Canadian units during its latest quarter ended June 30. The result, just the latest of slowed sales among fast-food brands, had analysts and investors discussing the future prospects of the segment amid the harsh environment of rising unemployment, slowed consumer spending and deep menu price discounting.

Burger King said its plan for the future includes the promotion of both value-based items and premium menu offerings. New equipment platforms in the majority of BK units will help the chain create such new products as ribs and the Steakhouse XT burger.

“We will flex premium when we can; we will flex value when we need to,” Burger King chairman and chief executive John Chidsey said during the company’s latest corporate conference call with investors in late August.

Value products, while the needed ingredient for today’s recession-weary consumer, also can be the nemesis of the operating franchisee, as profit margins are cut with a lowered price point. Earlier this year McDonald’s Corp. and its franchisees agreed to remove its double cheeseburger offering from the chain’s Dollar Menu and raise the price to a suggested $1.19. A new sandwich, the McDouble, with lower food costs because it has one fewer slice of cheese, was placed on the Dollar Menu instead.

Prior to Burger King’s announcement on the pending availability of its $1 double cheeseburger, securities analyst Steve West at Stifel Nicolaus lowered his rating on Burger King’s stock from a buy to a hold. He said sales pressures will remain through the company’s fiscal 2010, especially the current first quarter, when West projects U.S. same-store sales to fall 8 percent from a year earlier.

He also cited franchisee tension through the system, often a problem that stems from reduced sales and profit at the unit level.

“Our recent channel checks and discussions with franchisees show growing discontent in the system,” West said. “New products…are not producing the expected sales lifts in test markets, pressuring restaurant-level margins. Additionally, management’s questionable decision to recoup soda vendor rebates is clearly not sitting well with a franchise base that is seemingly quickly becoming discontented and less profitable than a year ago.”

In May, a group of franchisees filed a suit against the franchisor for allegedly diverting funds from soft drink providers that were typically earmarked for franchisees to a national advertising fund.— [email protected]