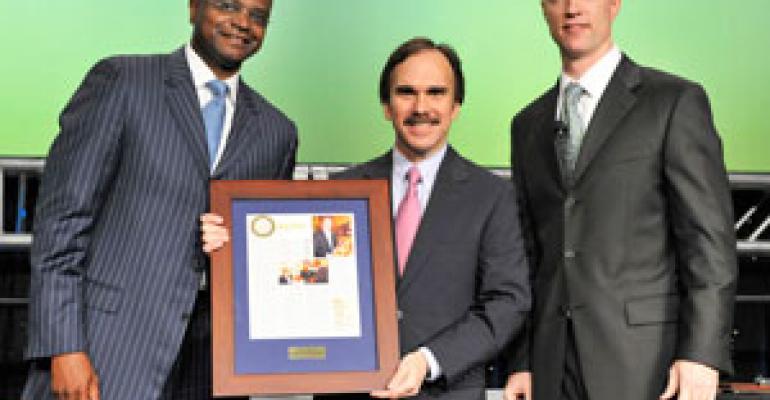 Hundreds gathered at the Hilton Anatole hotel for the event, which was presented in conjunction with NRN’s 50th annual Multi-Unit Foodservice Operators conference.

Greco, who joined the then-struggling Bruegger’s in 2003, has been instrumental in guiding the evolution of the bagel chain. Under his leadership, Bruegger’s has grown to 290 units and now posts annual systemwide sales of $200 million. Greco has also overseen updates to the restaurants’ decor and the expansion of the menu to include house-made breads, sandwiches, and wraps.

“This is not so much a recognition of me, but of the 3,400 members of my team who work to create memorable guest experiences 600,000 times a week,” Greco said when he accepted his Golden Chain award.

When he was announced as Operator of the Year, Greco said he was surprised and noted how moved he was by a tribute to industry legend Norman Brinker earlier that evening.

“I hope some day that I can help others to further their careers in the same way he did,” Greco said.

Also at the event Monday night, Richard Melman, founder and chief executive of Chicago’s Lettuce Entertain You Enterprises, was given NRN’s 2009 Pioneer Award. Melman’s trailblazing restaurant company, which has 78 restaurants representing more than 30 brands, has served as a model for numerous other multiconcept operators nationwide.

MUFSO concludes Tuesday. For the latest updates from the show, stay tuned to NRN.com, visit NRN's blog, Show NEWS by NRN, or follow us on Twitter.