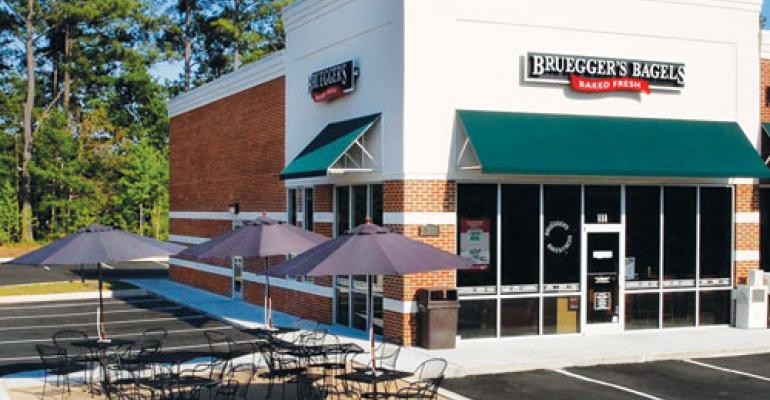 Greco told Nation’s Restaurant News that officials of the newly merged firms were looking to create synergies among their foodservice brands.

“We’re looking for ways to leverage our strengths,” said Greco, who will continue to serve as CEO of the Burlington, Vt.-based Bruegger’s system.

At the same time, he said the companies have been discussing the pairing of individual brands, such as Bruegger’s Timothy’s Coffees concept and Le Duff’s Brioche Dorée for future expansion in North America.

The acquisition of the 437-unit Bruegger’s by Groupe Le Duff establishes the Rennes, France-based firm as one of the world’s largest bakery-café companies, with nearly 1,200 restaurants and bakeries and sales of more than $1.5 billion.

“The addition of Bruegger’s to our North American operations combined with our other brands…reinforces our position in the café-bakery segment and is aligned with our multibrand strategy,” said Claude Bergeron, chief executive of Le Duff America.

“This opens up a lot of possibilities for new products that will now be able to be sourced within our own family of companies,” Greco said.

A private company, Bruegger’s reported that sales for its fourth quarter ended Dec. 28 rose 3.6 percent to $63.2 million compared with the same period a year ago. Same-store sales for the quarter rose 3.1 percent systemwide, and increased 4.3 percent at corporate locations.

Greco said that while expansion in 2011 will go ahead as planned for Bruegger’s, La Madeleine, and Timothy’s, executives are weighing some future tandem opportunities for Brioche Dorée and Timothy’s. The 500-unit Brioche Dorée, which features French-flavored fast-food, has about 30 U.S. locations in airports, travel plazas and hospitals that are operated by on-site feeders Sodexo and HMSHost. Worldwide, the brand has about 500 outlets.

Greco called Groupe Le Duff “an ideal partner,” and said, the companies’ “combined expertise will help enhance Bruegger’s stable of brands and expand our concepts across North America through both company-owned and franchised bakery cafes.”

Bruegger’s was acquired by private-equity firm Sun Capital of Boca Raton, Fla., in 2003, at a time when the brand’s sales and profitability were flagging. M. Steven Liff, senior managing director of Sun Capital, said the chain at the time was overleveraged and battered by the low-carbohydrate craze that was sweeping the country.

In addition, Bruegger’s stores “were old and tired, and in need of renovation,” he said Friday. “The chain was trending downward when we acquired it.”

After Sun Capital bought Bruegger’s, Liff said, “We restructured the balance sheet, renovated virtually every store, re-engineered the menus, brought in a new coffee supplier, added drive thru and upgraded the management team,” which included the naming of Jim Greco to the post of chief executive.

Liff said he sees synergies between Groupe Le Duff and the Bruegger’s system.

“[Groupe Le Duff] has bakery-cafes in Europe and North America, and they want to expand in Canada with Timothy’s,” Liff said. “I think there will be good synergies with commissaries and product sharing. It’s a natural fit.”