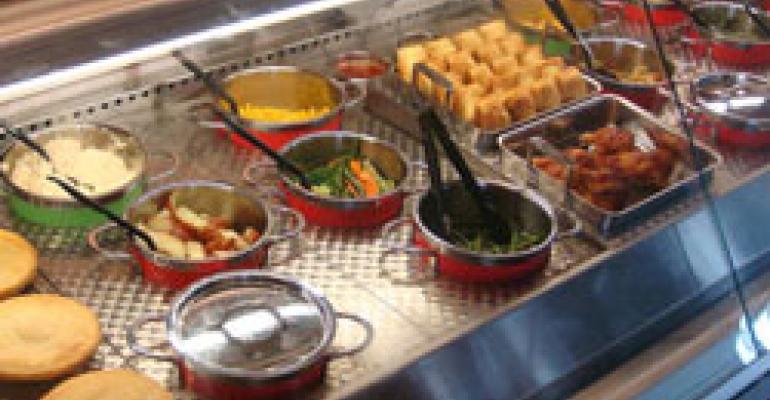 Boston Market's pilot test of 10 revamped stores in the West Palm Beach, Fla., market has resulted in double-digit sales increases at some locations and may soon lead to a systemwide rollout of china and silverware, chief executive Lane Cardwell said.

The repositioning test begun last week involves a prominent new Chef’s Hot Case in the counter area that suggests that the 520-unit chain’s foods are sitting on a stove top instead of a cafeteria steam table, as well as new food items and boosted staffing levels.

But perhaps the biggest surprise to come from the test by the 25-year-old chain is the reaction of guests to the replacement of disposable plates and plastic cutlery with crockery plates and metal utensils.

“Everyone is commenting about it,” Cardwell said. Guests and staff of the fast-casual chain are amazed “how good our food looks” on the new plates, he added, and how favorably it compares to casual-dining fare costing as much as $3 more than Boston Market’s typical $7 meal.

Summing up the feeling of the executives on site in Florida for the first days of the pilot test, Cardwell said, “We agreed that we need to go back and figure out how we can roll out plates, forks and knives in an accelerated fashion.”

Among the considerations attached to such a rollout, he said, is the need to install warewashing equipment systemwide.

“Even in the few days we’ve been open, we’ve seen in some cases dramatic shifts upward in sales and customer traffic,” Cardwell said. “We’ve had three stores above 20 percent in sales gains against prior years.”

The sales growth is tied to higher traffic, he indicated, as “we have not raised prices.”

The revitalized restaurants in the West Palm Beach market stretching from Vero Beach and Stuart to Boca Raton have already received media coverage, but Cardwell said the chain will begin "heavy TV advertising" on May 24.

“Most chains would not put this level of change through at one time,” he said of the scope of the Florida pilot test and the reluctance of many chains to simultaneously test multiple food, service and decor elements.

Cardwell said the restaurant makeovers were engineered and executed with the help of the Results Thru Strategy consultancy and cost “under $30,000 per store.”

“We’ve spent upward of $60,000 per restaurant for remodels of the dining room in the past, only to find from research that no one knew we had done it. And we’ve added new menu items and found later that people didn’t notice,” Cardwell explained. “So we felt like it was important, this time, to do a lot of things at one time that were all integrated and all supported each other to make sure that people knew that something is different here. And they have noticed.”

Cardwell said guests in the test restaurants have responded strongly to new side dishes, such as the Loaded Mashed Potatoes with bacon, green onion and cheese, and the higher staffing level.

“We’ve hired over 100 people for the 10 stores to really upgrade our service and have additional people on hand for the extra business we’re expecting,” he said. “We now have a Dining Room Ambassador, who is helping people get their food to their tables, helping with drink refills, bussing tables and answering questions.”

The changes in the test market “have left our guests confused as to how we can possible do this without raising prices, which to me is the first sign we are on the right path,” Cardwell said.

Richard F. Davis, vice president of innovation and executive chef for Golden, Colo.-based Boston Market, said the following are among the changes at the West Palm Beach test restaurants:

Boston Market said the pilot test restaurants will offer guests a package of promotional deals in the weeks ahead, several of which are tied to Boston Market’s 25th anniversary this year. They include new birthday gifts for adults and children enrolled in the chain’s VIP loyalty program; 1985-priced Quarter White or Three-Piece Dark Rotisserie Meal with a choice of two sides for $4.99, starting May 24; “Celebrating 25 years” Friends & Family Rotisserie Lovers Night June 1 and 2, with Cardwell as host; and free birthday dessert with the purchase of a rotisserie chicken.

Other upcoming promotions in the test market: free whole rotisserie chicken for the first 25 guests at each restaurant celebrating their 25th birthday this year; free whole rotisserie chicken for the first 25 couples at each restaurant celebrating their 25th anniversary this year; 25-cent regular sides – up to four – with a whole rotisserie chicken purchase June 3-6; $4.99 special price Market Meal Deal June 7-30, with choice of two from half sandwich, half salad, soup and side dish offerings; Two Kids Eat Free on Saturdays and Sundays, with the purchase of an adult entree priced at $6 and higher, May 22 through June 27; and Free Smoothie Saturdays every Saturday in June.

Cardwell said Boston Market management will take about 60 days to get a read on how test items were received by consumers and fine-tune any aspects of the test that need it. The plan after that, he said, is to introduce the changes throughout the rest of south Florida “and then, hopefully, march it out in an accelerated manner through the rest of our system.”

“We’ve kind of stood still” during the past decade in terms of concept and menu changes, “and we felt it was time, especially given our 25th anniversary, that we pick up the pace,” Cardwell said. “We didn’t want to lose existing guests, but we wanted to re-engage people who used to be guests, three years, five years, even 10 years ago.”

A large part of that re-engagement process, Cardwell said, involves maintaining current prices while offering the enhanced experience created by changes in the test market.

He said the chain now serves an average of about 400 people per day per restaurant.

“If we only end up doing the same number of customers today [in repositioned units] that we were doing yesterday, we’d make less money,” Cardwell said. “But we’re convinced that what we’re doing will accelerate the visit cycle of our current guest and they will bring in people who used to be guests who have gone onto other concepts that are much newer.”