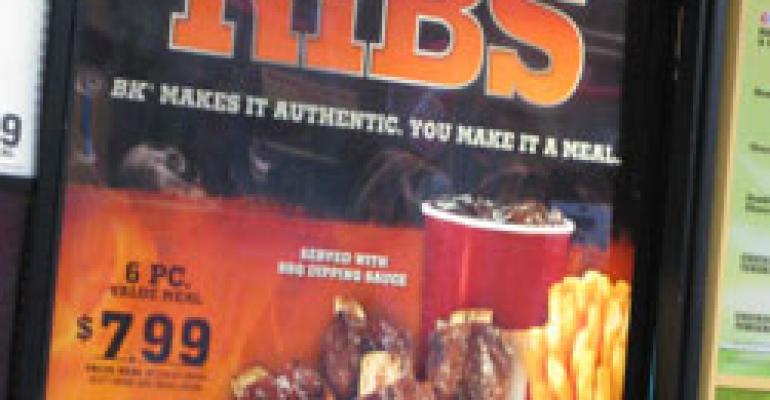 Burger King is rolling out its new Fire-Grilled Ribs to major markets this week, debuting a high-ticket item that nearly rivals casual-dining prices.

The new ribs, which have been tested in various markets and use the chain's new batch broilers that are now in nearly all domestic Burger King units, are priced at $7.99 as a six-piece combo meal in Dallas and $7.49 in Chicago. An eight-piece ribs meal is available in both markets for $8.99. The meals include French fries and a drink.

The ticket price nearly rivals some offerings at casual-dining restaurants like Chili's and Applebee's, which often start meal options at $9.99. Some casual-dining brands have dropped prices as low as $5.99 for special promotions on burgers, for example.

Since last year, Burger King has begun to offer both value items as well as more profitable, higher-ticket sandwiches and items, now made possible with the new batch broilers. The Miami-based company did not have immediate comment on the ribs debut, though executives had said it would be launched nationwide in May.

Leslie Kerr, president of the Intellaprice pricing advisory firm in Boston, described the $8.99 ribs as a bold move for Burger King.

"Burger King is currently promoting $1 menu items and 5 meals for $5, so introducing $8 and $9 items could send a message that confuses customers or at least creates some sticker shock," she said.

Kerr cited Intellaprice data that found the average price of a half-rack of ribs at casual-dining chains was $11.68 in 2009, while a riblet basket averaged $8.87. Both meals included side items, she said.

"If customers can get comparable items for a similar price or just a few dollars more in a full-service environment, it could make the sale a bit challenging for Burger King," Kerr said.

John W. Chidsey, chief executive of Burger King Corp., said in February that the company wanted to provide "extreme affordability" with value promotions. He added that the chain "will balance those offerings with a strong, indulgent product pipeline that includes Steakhouse XT, ribs, stuffed burgers, chicken LTOs and others."

Burger King still faces a lawsuit by franchisees, who said a $1 double cheeseburger promotion of last year had forced them to lose money. That value meal product was reformulated this year as the BK Dollar Double, which included two beef patties and one slice of cheese.