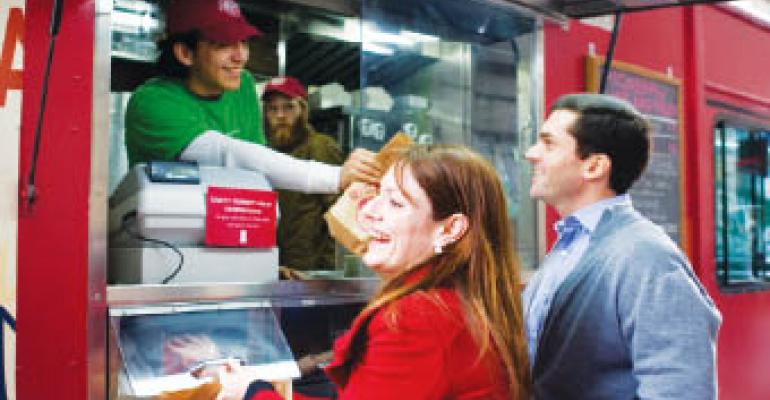 Technically, this past year was the first one to follow on the heels of the Great Recession, but many Americans didn’t feel as though they left the downturn back in 2009. While the nation’s economy grew slightly in 2010, the national unemployment rate remained stuck near 10 percent.

In the restaurant space, similar contradictions made for an analogously uneven recovery. Low levels of consumer confidence stressed the discretionary spending on which restaurants depend, but private-equity firms opened their wallets for the first time in years and began reinvesting in the industry. Meanwhile, as Congress debated health care reform for months and passed a bill that will standardize menu-labeling requirements nationwide, customers went for indulgent items like KFC’s Double Down and Denny’s Fried Cheese Melt in droves.

Yet despite the nuanced, complex narrative of the nation’s and the industry’s road to rehabilitation, several events and restaurant trends from 2010 stand out. Whether their effects were immediate or remain to be seen, operators took them in stride and headed the only direction there was to go: up.

Private equity returns in a big way. Like many banks and consumers, private-equity firms pulled back their spending at restaurants and spent much of the recession on the sidelines. But this year, those entities began putting their cash back to work in restaurants, closing deals to acquire medium-size brands with growth potential, like Wingstop and Papa Murphy’s Take ‘N’ Bake Pizza, or some of the industry’s largest well-established chains, such as Burger King and CKE Restaurants. Most recently, Centerbridge Capital Partners bought two brewpub companies, Rock Bottom Restaurants and Gordon Biersch Brewery Restaurant Group, to form a new holding company, CraftWorks Restaurants & Breweries.

And in other financial news, Bravo Brio Restaurant Group of Columbus, Ohio, was the first restaurant company to go public in four years, raising $140 million in its October IPO and signaling what some observers called pent-up demand from investors for high-quality restaurant offerings.

Burger King tries getting its ribs to stick. The quick-service chain rolled out its long-awaited Fire-Grilled Ribs entrée, which gave the chain a toehold in a territory occupied by casual dining in terms of menu — and price. With an eight-piece combo meal that sold for $8.99 in major markets, industry watchers followed the product launch closely to see whether it blazed a trail for more big-ticket items in quick service, like Subway’s Big Philly Cheese Steak, or ignited a backlash from fast-food customers clamoring for value.

Though the chain went forward with premium items like ribs and the Steakhouse XT burger, Burger King still attempted to balance its menu with value items like the BK Dollar Double. This “barbell pricing” strategy played out all over quick service, with McDonald’s similarly promoting its Angus Third Pounder burgers and its Dollar Menu simultaneously.

Same-store sales pick up slightly.  Restaurants spent much of 2010 trying to stop the heavy losses in traffic common throughout the prior two years, and through aggressive discounting in their stores as the economy began to stabilize, they gained traction, particularly in the autumn months of the third quarter. During that time, Ruth’s Chris Steak House’s corporate locations logged a 4.9-percent increase in comparable sales, even as its Ruth’s Classics value offer became part of its permanent menu. Denny’s $2 $4 $6 $8 Value Menu pressured average checks and yielded slight declines in same-store sales in the third quarter, but the brand grew guest counts by 2.3 percent — its largest increase since 2005.

Comparable-sales improvement transcended industry segments, as Texas Roadhouse logged a 4.3-percent gain at corporate locations, while McDonald’s domestic restaurants grew same-store sales by 5.6 percent, and Panera had a 6.9-percent gain. And the momentum appeared to continue into the fourth quarter, raising hopes that the industry had turned a corner.

The government gets  active. In March, President Obama signed into law his administration’s landmark health care reform legislation. Restaurateurs largely opposed the measure because of concerns about labor costs inherent in the law’s mandate that businesses provide coverage to employees. Another provision of the law, requiring that all chains with 20 or more units post calorie counts on menus and menu boards, put the logistics of nutrition disclosure front-of-mind at industry gatherings throughout the year. More recently, the San Francisco Board of Supervisors voted to override outgoing Mayor Gavin Newsom’s veto of a ban on toys sold with kids’ meals that don’t meet stringent nutrition guidelines. The industry will be watching for some kind of domino effect reminiscent of menu labeling, and a similar toy ban already has been proposed in Superior, Wis. Meanwhile, the Republican victory in November’s mid-term elections has operators holding their breath about the political possibilities ahead.

Restaurants check in. Much like how most of the industry flocked to Twitter in 2009, many restaurant brands and independents in 2010 raced to adopt online marketing’s newest platforms: location-based services like Foursquare, Gowalla and Loopt. Social-media-savvy independents were among the first restaurants to develop special badges or rewards for their most frequent users, but soon chains like Dunkin’ Donuts, Chili’s and McCormick & Schmick’s developed their own discounts tied to Foursquare check-ins.

More recently, Starbucks, McDonald’s and Chipotle were among the first concepts to partner with Facebook Deals, which allows restaurants to reward check-ins with tangible discounts and freebies. Facebook’s adoption of a location-based feature showed the industry that social media’s biggest platform won’t concede the fast-growing space to the upstarts, and a collaborative competition among all the networks has many operators optimistic that the ability to deliver deals to customers will only get more robust.

KFC’s Double Down ushers in the ‘dude food’ era. Carl’s Jr. and Hardee’s may have targeted “young, hungry guys” long before KFC’s April 12 introduction of its breadless sandwich, but the breathless buzz surrounding the Double Down primed consumers and the media to take notice of all the indulgent innovation taking place in the industry.

Customers, execs dig brands’ new digs. In addition to re-engineering menus and operations, restaurants also leveraged new building designs and prototypes to maximize profits. Of the 120 to 130 units Chipotle planned to open in 2010, at least 32 of them were to be the brand’s new “A Model,” which reduced the restaurant’s footprint by 25 percent and slashed opening costs by $25,000. Denny’s and Ruby Tuesday were among the restaurant companies to plan fast-casual variants for future growth.

Other chains to debut a new prototype were Qdoba Mexican Grill, which added more freshness cues to its décor to connote its “artisanal Mexican kitchen” positioning, and Fazoli’s, whose new setup allowed for fast-casual service touches, such as table delivery and real plates and silverware. Fazoli’s chief executive Carl Howard said average unit volumes were running between 14 percent and 47 percent higher at the new stores compared with the systemwide average.

Food trucks keep rolling. The food truck phenomenon, which began in the food-obsessed coastal cities of New York and Los Angeles, not only spread to more cities across the country, but also proved useful to restaurant chains looking to experiment. Sizzler, for example, used a food truck as a branding tool to spread word of its brand revitalization. Gold Star Chili’s Chilimobile started out much the same way, and the chain soon found that the vehicle was a boon to its catering sales and event marketing.

Meanwhile, other brands used mobile restaurants not only to build incremental sales but also for the social-media cachet. Burgerville promoted the whereabouts of The Nomad, its food truck, on Twitter, while the 25-city tour of the Blizzardmobile drove content on Dairy Queen’s Facebook brand page for months. Qdoba used its truck as a mobile test kitchen, taking its Taco Truck to the streets of Seattle to sample its Street Tacos.

Chains start to pull back on discounting. While steep discounts through group-buying sites like Groupon, particularly at independents, remained as popular as ever with consumers, many chain restaurants contemplated ways to gradually de-emphasize deals and even take some price increases toward the end of 2010. Ruth’s Hospitality Group tested a “modest” price increase on several items in the third quarter, while Texas Roadhouse tested a 2-percent hike in about 25 restaurants. McDonald’s also said during its latest earnings call that it could take a menu price increase of about 2 percent to fight expected inflation in labor and commodity costs in 2011.

No segment was more competitive from a discount perspective than pizza in 2010. At Pizza Hut, a $10 large-pizza deal drove same-store sales increases of 5 percent in the first quarter and 8 percent in the second quarter, spurring Papa John’s to compete with a $10 large-pizza offer and Domino’s to continue its deal of two medium two-topping pizzas for $5.99 each. But by late July, Pizza Hut pivoted from that deal with a simplified pricing structure, in which medium pizzas were $8 and large pies were $10.

Haiti earthquake, Gulf oil spill prompt industry’s  generosity. January’s devastating earthquake in the Caribbean nation of Haiti killed thousands and left many more internally displaced. The restaurant industry quickly mobilized its fundraising prowess for the island nation, from independents donating a portion of sales to relief organizations working in Haiti, to McDonald’s Corp. pledging $500,000 to the Red Cross and getting a matching donation from its Latin American franchisee, Arcos Dorados. Other brands donated supplies, including Lime Fresh Mexican Grill, which gave 500 cases of bottled water to relief organizations in Haiti and organized collections of clothes, food and supplies at its five restaurants in South Florida.

Likewise, following the April 20 explosion of an oil rig in the Gulf of Mexico that turned into a prolonged oil spill, hurt the region’s hospitality industry and spiked fears about Gulf seafood supplies, restaurants pulled together to support Gulf Coast residents and the region’s damaged local businesses. Several celebrity chefs teamed up with the Louisiana Seafood Promotion & Marketing Board to raise money for the “Friends of the Fishermen Fund.” One of the participating chefs, Dean Fearing of Dallas, donated the proceeds of his eponymous restaurant’s third-anniversary dinner to the fund.