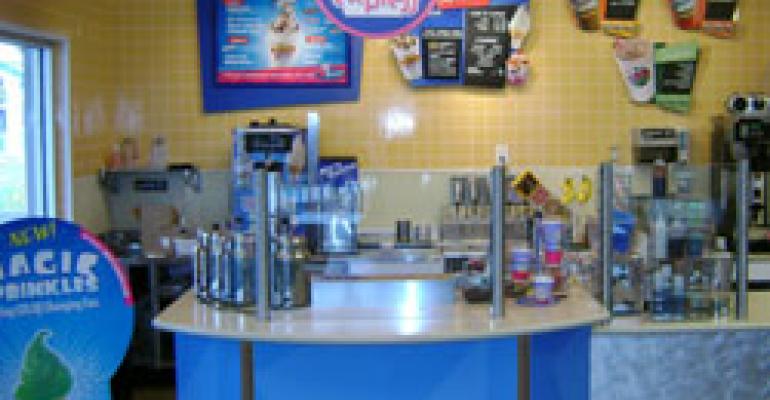 CANTON Mass. Baskin-Robbins has launched a new scaled-down version of the chain’s ice-cream stores in four markets, with plans for a broader rollout through 2009, said chief brand officer Srinivas Kumar.

Called BR Express, the units are approximately 200 square feet in size and feature only Baskin-Robbins’ soft-serve ice cream product in six to eight proprietary flavors as well as a variety of mix-ins available on a rotating basis. The chain’s signature beverages are also available.

The express units are designed for use in onsite venues such as airports and college campuses, and are currently located in New York, Florida and Wisconsin. Officials said they are rolling out the new units across the Southeast.

“The category has been lethargic,” Kumar said, “so we thought, ‘How can we make it exciting using 31 flavors while taking the complexity of dipping out?’ That’s when the ‘wow’ moment came, and we went into test 26 days after putting it on the concept board.

“We’re trying to educate the consumer out of [choosing] vanilla, chocolate and strawberry,” he continued. “The idea is to keep updating this while at the same time keep Express simple, not too complex.”

Baskin-Robbins also is moving forward with plans to grow its Cafe 31 fast-casual ice-cream concept as the chain works to revitalize its 63-year-old brand and excite its franchisee community. The first Cafe 31, which features a high-end dessert bar and gourmet ice-cream products, opened last August in Foxborough, Mass. Most menu items are priced from $3.65 to $5.95.

In addition, the chain has unveiled two new products: a brownie a la mode ice-cream cake that serves six and is priced at $9.99; and a kid-friendly, soft-serve Magic Sprinkles cone that changes colors from red to blue when licked.

In December, Baskin-Robbins introduced a line of more healthful treats called BR Choices. The line included fat-free, dairy-free, no-sugar-added and light ice cream choices, all of which contain no more than 140 calories per 2.5-ounce.

Baskin-Robbins is a division of Canton-based Dunkin’ Brands, which also is parent to the Dunkin’ Donuts chain. Baskin-Robbins operates or franchises 5,800 ice-cream units in 36 countries.