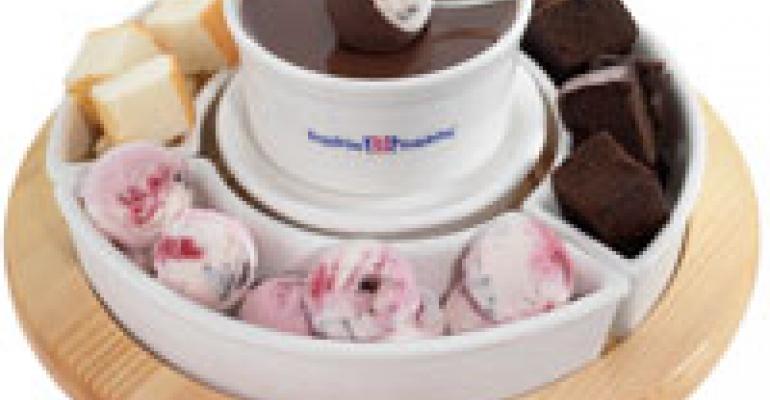 FOXBOROUGH Mass. The Baskin-Robbins ice cream chain has unveiled Cafe 31, a prototype for a more upscale dessert concept offering fondues, cakes and other treats prepared by an in-store pastry chef.

Jimmy Fitzgerald, vice president of concept innovations for parent company Dunkin' Brands Inc., described the new venture as "the equivalent of a fast-casual restaurant in the ice cream [segment]."

The 2,000-square-foot prototype opened Thursday at Patriot Place, a retail and restaurant complex adjacent to Gillette Stadium here. The store is company-owned, but Dunkin' officials said future Cafe 31 units would be franchised.

"One of the needs we had identified was that an awful lot of [retail] centers were requiring to step up what our image and brand is," Fitzgerald said. "This allows us to open doors and go into places we really don't fit -- upper-scale malls and downtown locations."

Fitzgerald said Cafe 31 stores are expected to open next year in New Jersey, New York, Chicago and Los Angeles. Each shop will have a pastry chef, and treats will be prepared in front of customers, he said. The decor features a vivid pink and blue color scheme, with both booths and two-top tables. Fitzgerald described the atmosphere as "electric, bright and fun."

Most of Cafe 31's menu items range in price from $3.65 to $5.95. A shareable chocolate fondue dessert costs $11.95 and includes mini ice cream scoops, fruit and cake for dipping.

Also on the menu are hot and cold beverages, such as lattes, cappuccinos and hot chocolate.