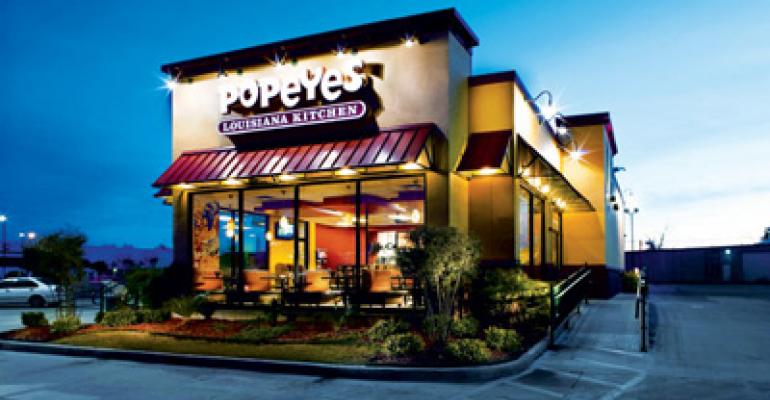 AFC Enterprises Inc., parent of the Popeyes quick-service chain, credited successful promotions for helping it bounce back in the first quarter from sluggish sales last year.

The Atlanta-based company also cited lower interest expense as it reported Wednesday a 24-percent jump in net income for the April 17-ended quarter. AFC earned $7.2 million, or 28 cents per share, in the period, compared with year-ago profit of $5.8 million, or 23 cents per share.

“We’re off to a good start in 2011,” Cheryl Bachelder, AFC’s chief executive, told investors during a conference call Thursday. “We continue to grow our global Popeyes sales.”

During the call, Bachelder discussed the promotions that drove first-quarter sales as well new marketing plans in the pipeline. She also outlined Popeyes’ growth plans and initiatives in place to help offset rising commodity costs.

Bachelder said two promotions in March delivered strong sales in the first quarter and made up for flat sales in January and February, which the company blamed on weather.

One of those promotions was Popeyes’ signature Butterfly Shrimp Tackle Box, which featured eight pieces of Butterfly Shrimp with Cajun fries and a buttermilk biscuit for $4.99. AFC said it used national advertising to promote the limited-time offer.

Upcoming marketing plans include the return of Popeyes’ Wicked Chicken, a popular promotion last year that earned the chain a MenuMasters Award from Nation’s Restaurant News for Best Limited-Time Offer. The Wicked Chicken offer, which consists of thin strips of all-white chicken with a buttermilk biscuit, ranch dipping sauce and a mini bottle of Tabasco sauce, will sell for $3.99 from May 30 to June 26.

Popeyes also launched a buy one, get one free promotion this month to continue the celebration of Popeyes’ spicy and mild bone-in fried chicken, which the chain said beat KFC's Original Recipe chicken n a national taste test. The limited time offer includes a free two-piece meal with the purchase of a three-piece meal at regular menu price

At the end of the first quarter, Popeyes had 1,997 restaurants, including 1,587 domestic restaurants and 410 international units. The vast majority of Popeyes’ units are franchised, with franchisees owning 1,959 and the company operating 38.

AFC said in a statement it would look to offset a projected 4 percent to 5 percent increase in food costs this year by growing sales, selectively raising menu prices, and identifying supply-chain and in-restaurant cost controls.

The company also plans to move to new offices in Atlanta, which will provide 40 percent more office capacity while cutting the cost per square foot by 20 percent.

Bachelder said Popeyes also is reducing service times with a systemwide adoption of speed-of-service initiatives. She said average weekly drive-thru times have improved by about 30 seconds.

“We want to be best in class,” she said. “This is an area in our business we’ll always be working on.”