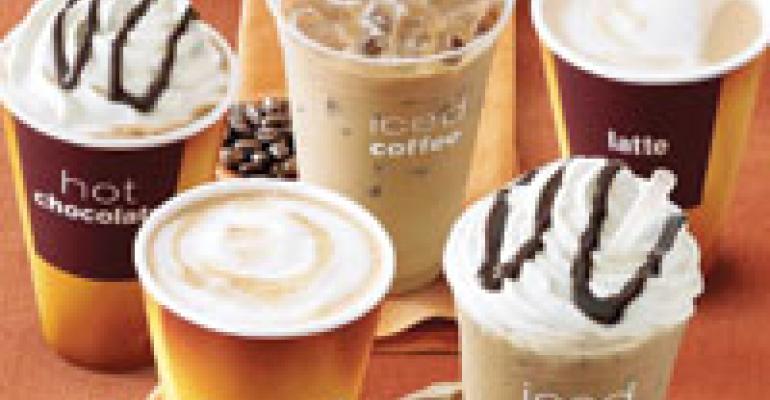 While the coffee wars continued to boil throughout the year, the ever-popular java returned to its average-Joe roots but with some upscale appeal.

Starbucks wrestled with falling sales as recession-battered consumers cut spending. At the same time, McDonald’s launched its new espresso-based drink line backed by a value-focused campaign, which no doubt cut into Starbucks’ sales.

Customers also saw an improvement in the quality and value of specialty coffees served by other hamburger chains like Burger King, which introduced BK Joe, and Wendy’s, which debuted coffee-flavored Frosties, according to surveys.

Even as operators looked for ways to streamline or strengthen their brands, many found that beverages were indispensable in these efforts.

Baskin-Robbins made certain its “express” and lower-cost prototype, BR Express, served the chain’s signature beverages. And when Starbucks returned to its neighborhood roots by opening “15th Avenue Coffee & Tea Inspired by Starbucks” in Seattle, the chain said it would feature some limited-time offers that were not available to U.S. Starbucks locations and a wider line of full-leaf Tazo brand teas. Jamba Juice, with many of its stores located in recession-pummeled California, reported losses in 2009, but the chain still said it would test cold teas and other menu items like wraps and sandwiches.

Orla Murphy-Lascola, co-owner and sommelier of American Seasons in Nantucket, Mass., drew from her experience making infusions for martinis to develop her lavender soda. Inspired by lavender-infused vodka, she created an infusion of lavender syrup with a mixture of soda and a splash of water.