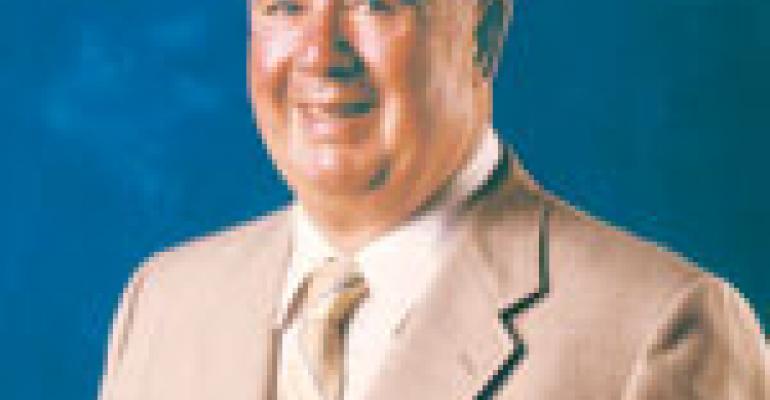 The first restaurant that bore Glen Bell’s name had nothing to do with tacos. Not at first, anyway. Bell’s Hamburgers sold just that when he opened it in 1948 in San Bernardino, Calif., a few miles away from a popular drive-in restaurant called McDonald’s.

Tacos came later, as Bell sought a way to differentiate his business from the rapidly growing number of hamburger stands in San Bernardino, according to his official biography, “Taco Titan.” A big fan of Mexican food, he thought tacos would be a winner. After experimenting with recipes, he introduced his version of the taco for 19 cents at his third burger stand in 1951. That taco, made with ground beef, chopped lettuce, shredded cheese and chili sauce in a crispy shell, would ultimately become the basis of a business that would change the face of fast food.

“Taco Bell opened up a whole new industry and introduced millions of Americans to Mexican food for the first time,” Bell tells Nation’s Restaurant News. “I always smile when I hear people say that they never had a taco until Taco Bell came to town. We changed the eating habits of the entire country.”

Bell experimented with ways to fry tortillas in just the right shape, including asking a man who made chicken coops to build him a frying contraption made of wire. Eventually, he got it right, and tacos became a hit at Bell’s Hamburgers.

In 1954 he opened Taco-Tia, his first fast-food restaurant that served only Mexican food. Bell opened a few more Taco-Tia units before selling his stake in the restaurants to his business partner. Soon after, he partnered with two professional football players and the son of singer Bing Crosby in another Mexican fast-food concept, this one called El Taco. Two years later, he again sold his stake. In his biography, Bell says that he left both partnerships because he and his associates “didn’t share the same vision or the same degree of dedication.”

Bell was ready to start over, and he needed a new name for his next project. “Taco Bell” was the suggestion of friend and business associate Bob Trujillo, who was a real-estate dealer when he began working with Bell during his El Taco days. Trujillo describes Bell as a dedicated entrepreneur who worked around the clock and was always thinking of ways to make his business better.

“He was constantly thinking,” Trujillo says. “I’ve never seen anyone who was so intent on his product. His focus was totally on the product of the taco. He made that thing famous, and the taco today tastes the same as it did then.”

The first Taco Bell opened in 1962 in Downey, Calif. The menu was simple: tacos, tostadas, burritos, beans and chiliburgers, also called Bellburgers, which were made with the same ground-beef mixture used in the tacos.

He opened eight more units over the next two years and marked the debut of each with a lavish grand opening. The celebrations, complete with live music, dancing, searchlights and free sombreros, were costly, but Bell says they were necessary to drum up business in an increasingly crowded fast-food marketplace.

“You have to be creative and stand out from the competition,” he says. “It was important to create excitement when a restaurant opened.… My accountants advised me not to spend money on things like these grand openings. They said, ‘You can’t do it—you’ll go broke.’ Well, I wasn’t afraid of going broke as I had already been there.”

Bell worked relentlessly in the early days of Taco Bell. “He had no time factor in his world,” Trujillo says. “He worked 18 hours a day, seven days a week. He would drink coffee [to get by].”

Bell was always busy, and no one knew this better than Marty Bell, his wife of more than 50 years. She recalls a time when he called her from one of the stores as she was preparing dinner. As soon as she answered, however, he had to put her on hold. She says she waited on hold quite a while. She recalls: “I kept on doing dinner and pretty soon he comes in the back door and asks, ‘Who are you on the phone with?’ I told him, ‘Don’t ask.’”

“He was that busy,” she says, “and he always had a project ahead of him.”

Bell soon turned to franchising in order to grow Taco Bell to compete with big rivals like McDonald’s. Among the earliest franchisees was Larry Hahn, who came on board in 1965, when Bell “had only one desk and a dream.” Hahn says Bell was smart enough in the early days of Taco Bell to hire experienced people to help franchisees get started. He points to former operations director John Gorman, whose previous work with Jack in the Box made him an ideal resource for franchisees. Bell still worked closely with franchisees in the beginning, and Hahn says his leadership was inspiring.

“He’s the kind of guy if you work hard for him, he’ll do anything to help you,” Hahn says.

Bell helped more than his franchisees—he also helped some of his competitors get started. John Galardi was 19 when Bell hired him in 1958 to work at a Taco-Tia, and then a few years later to work in the El Taco commissary. When Bell decided to build a hot dog stand right before he started Taco Bell, he gave it to Galardi to run. Marty Bell came up with the name for the hot dog stand: Der Wienerschnitzel.

“I owe him a lot,” says Galardi, whose Galardi Group today operates or franchises 400 Wienerschnitzel units. “He gave me my first job and sold me my first store. His wife named the company, and our kids grew up together. The basic foundation and attitude I had about the food business came from him.”

Another one of Bell’s early employees, Ed Hackbarth, also went on to create a successful fast-food business when he founded the Del Taco concept in the 1960s.

“There’s plenty of business to go around,” Bell says, “so I’m very happy to see others succeed.”

Bell was an entrepreneur at heart, Galardi says, and his discipline, creativity and people skills made up for a lack of formal business training. When Bell was trying to secure a site for a new store, he wouldn’t throw out a bunch of sales data to support his cause, Galardi says. Instead he would bring the landlord to one of the restaurants during the lunch rush and show him around, maybe even let him make a taco. It worked.

“Entrepreneurs basically sell themselves first,” Galardi says. “All humans don’t like to live in fear; they like to trust you. Whether it’s a bank or a landlord or a customer, you have to get through the fear. You have to make them feel like this was worth the risk.

“And Glen had that ability,” he says.

Taco Bell became a publicly traded company in 1969. Bell served as chairman until 1975, three years before Taco Bell, then 868 units strong, merged with PepsiCo in a $130 million deal.

In 1997 PepsiCo spun off Taco Bell, along with Pizza Hut and KFC, in a company called Tricon Global Restaurants. That company renamed itself Yum! Brands Inc. in 2002 following the acquisitions of the Long John Silver’s and A&W All American brands. Today the Taco Bell system includes more than 5,600 units in the United States.

Glen Bell, now 85, lives in Rancho Santa Fe, Calif., with his wife. He has been struggling with Parkinson’s disease for more than two decades, which makes it difficult for him to speak and move around. Marty Bell says he has “good days and sleepy days.” But, given his tendency to be constantly thinking of the next big thing, he probably has a few ideas.

“If he had just a little more energy, he’d start a new project,” she says.

The 2008 Golden Chain, Pioneer and Innovator award winners will be honored at a gala banquet, sponsored by American Express, during the Multi-Unit Foodservice Operators conference Oct. 12-15 at the Gaylord National Resort & Convention Center in National Harbor, Md.