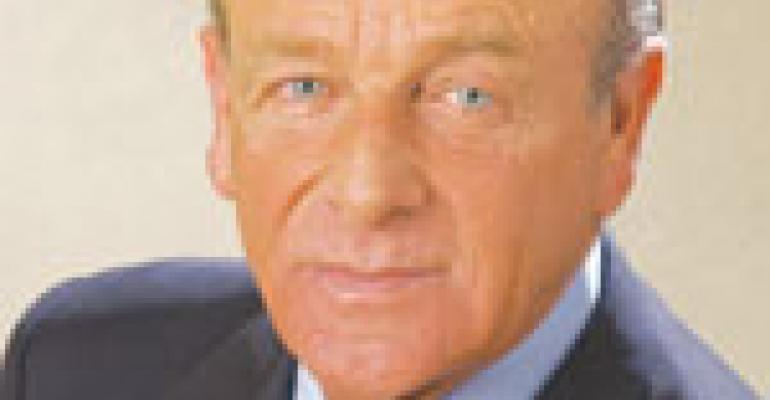 2008 Innovator of the Year: Fedele Bauccio

John McCain may be the so-called maverick of the political world, but in contract foodservice that title belongs to Fedele Bauccio, co-founder and chief executive of Bon Appétit Management Co.

When others have gone to the left, Bauccio has gone to the right. His go-against-the-crowd mentality has positioned Bon Appétit as a leader in its field and resulted in some of the industry’s most forward-thinking practices.

“I was not very proud of some of the things in the industry,” Bauccio says. “It’s important to be successful and profitable, but I wanted to be a change-maker.”

In 1987, Bauccio, along with partner Ernie Collins, founded the Palo Alto, Calif.-based Bon Appétit on the simple idea of raising the bar in the contract foodservice business. Bauccio’s idea was to “create a restaurant approach in the contract environment,” something no one in the sector was doing. Bauccio was among the first operators to have trained chefs in the kitchens at his cafes and one of the first to bring those chefs from out behind the line and into the dining room to do exhibition-style cooking.

In another departure from the status quo, Bauccio encouraged his chefs to create their own menus and to buy fresh, locally grown ingredients at a time when most other contract foodservice companies were churning out mass meals from big recipes using frozen, canned and prepackaged ingredients.

“At the beginning it was because I always felt if you don’t create uniqueness it gets harder and harder to compete,” Bauccio says of the practices he put in place.

But what began as a culinary act, to bring better quality and better-tasting food to on-site consumers, soon became a personal passion for Bauccio. He began to see the positive impact of fresh, local foods on communities, the environment and individual well-being.

Fueled by his newfound passion, Bauccio began leading his company down the path of socially responsible food, a road few other operators had traveled at the time. The first effort came in 1999 when Bon Appétit launched its Farm to Fork program, promoting food purchasing from local sources. Three years later Bauccio positioned Bon Appétit, by then a division of Compass Group North America, as a leader in the sustainable-seafood movement.

Bon Appétit’s leadership in sustainable seafood began in 2002 when it partnered with Monterey Bay Aquarium’s Seafood Watch, a program aimed at raising consumer awareness about the importance of buying seafood from sustainable sources. At that time Bon Appétit committed not only to serving sustainable seafood in the aquarium’s eateries, but to all of the company’s other clients. While some operators might have used the partnership to say “we’re better than you” to competitors, instead Bauccio became a champion for the program, working tirelessly to get the entire industry to join the effort. After Bauccio’s passionate pitch at a board meeting, Compass Group North America, one of the nation’s largest contract feeders, came on board Seafood Watch in 2005. Other industry leaders soon followed, including foodservice giant Aramark Corp. Today, Seafood Watch has more than 170 partners, including restaurants, businesses and conservation groups.

“[Bauccio] has been the mouthpiece,” says Jennifer Dianto Kemmerly, business specialist for Monterey Bay Aquarium. “He took this all the way up the foodservice food chain. [Bon Appétit] proved to everyone that this can be done.… You can serve sustainable fish and make money.”

While Bon Appétit earned a reputation as a major proponent of sourcing sustainably harvested seafood, the company’s green efforts didn’t stop there.

In 2003, Bon Appétit debuted its Circle of Responsibility program, which provides diners with information on sourcing, kitchen principles and nutrition. Last year, the company launched the Low Carbon Diet, a program designed to shrink greenhouse gas emissions from the company’s foodservice operations and educate consumers about the connection between food and climate change.

Today, Bauccio says 40 percent of all Bon Appétit food comes from sources within a 150-mile radius of each cafe, and the company uses only sustainable seafood, sources turkey breast and chicken raised without antibiotics, features natural-beef burgers, and leads the industry in using cage-free shell eggs. The company’s green efforts became so numerous that in 2005 the Bon Appétit Management Company Foundation was set up to educate consumers, suppliers and foodservice professionals about the impact of their food choices on the environment, local economies, and the quantity and quality of healthful food, and to inspire them to change.

“His whole passion, almost religious attention to sustainability, green issues…he saw before anyone else in the industry,” says Gary Green, president and chief executive of Charlotte, N.C.-based Compass Group North America. “He drove the industry to pay attention.”

In addition to following his lead on sustainable fish, Compass has also adopted some of Bauccio’s best practices. For example, Compass’ Balanced Choices, a program designed to help on-site diners make more healthful meal decisions, is an adaptation of Bon Appétit’s Circle of Responsibility initiative and is now available at Compass accounts worldwide.

“We get together maybe four times a year with all the Compass companies,” Green says. “Inevitably, most of the best practices come from Bon Appétit.”

Though his impact on the industry and consumers has been substantial and far-reaching, Bauccio never set out to make a political statement, or even to be in the foodservice industry for that matter.

In 1960, Bauccio was a student at University of Portland in Washington set on studying dentistry. To pay for school, the New York-born Italian who grew up in Los Angeles and says he’s “always had a love affair with food” got a job as a dishwasher in the dining hall, which was run by Menlo Park, Calif.-based Saga Corporation’s Education Division. One day a cook grabbed him and asked him to help peel vegetables after class.

“He taught me how to use a French knife and then I was hooked,” Bauccio says.

He graduated from the university in 1964 with a bachelor’s degree in economics and then earned a master’s degree in business administration in 1966. In 1972, he transferred to Saga’s Business Food Service Division and over the next two decades held many positions there, including divisional president, president of Saga’s Specialty Foodservices Group and president of the Stuart Anderson’s steakhouse chain.

Larry Mindel, managing partner of Poggio Trattatoria in Sausalito, Calif., who worked with Bauccio at Saga and hired him to manage the company’s Stuart Anderson’s restaurant chain vividly recalls what first attracted him to Bauccio.

Mindel credits in part that enthusiasm, drive and spirit not only to Bauccio’s success at Saga, but his success with Bon Appétit and in the industry as a whole.

“Fedele said we can do it better…better food…fresher,” Mindel says. “I think he’s a great innovator.… He turned the institutional-feeding business upside down.”