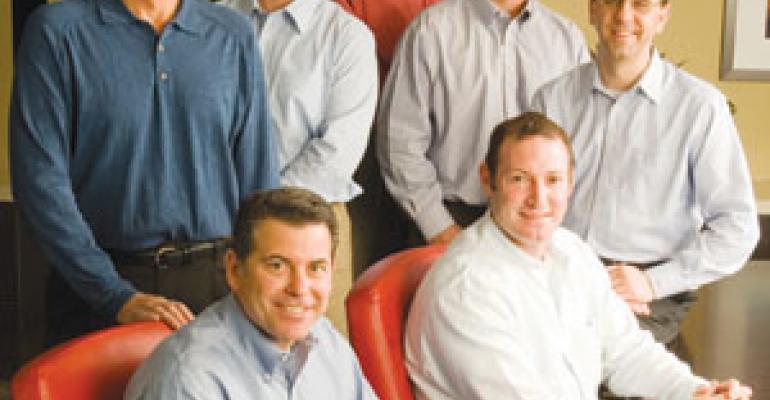 “We thought our company needed discipline and structure,” Motenko says. “We were past the entrepreneurial stage, the concept was relatively fine-tuned, but the company lacked the kind of financial and operational discipline to grow to be a national brand.”

In the three years since Deitchle was named president and chief executive of the casual-dining chain specializing in deep-dish pizzas and handcrafted beers, BJ’s has grown from 35 restaurants to 78 restaurants with annual systemwide sales of $318.7 million.

Those who know Deitchle, who was named to the additional post of chairman in May, are not surprised by the growth he has fomented at the Huntington Beach, Calif.-based company.

“I think he would tell you that the beginning was one of the most difficult times he has ever had,” Overton says of Deitchle’s first few years at Cheesecake. “We were small. We really had no infrastructure. The finance department was probably two people; we really had none of the analytics [Jerry] used. So much had to be done from scratch, and, really, Jerry did it. He took the finance department, he built the tax department, he really helped grow the IT department. He really helped our operators analyze everything.”

Deitchle is equally admiring of Overton.

Overton adds: “I like to think that I was Jerry’s mentor in terms of front-of-the-house and Jerry was my mentor in terms of analysis and the financial part of the company. Jerry is extremely hard-working, he is very honest and he is an incredible analyst of what happens [within a business’s operations]. He really has tremendous insight into what makes a business tick.”

Deitchle, whose industry experience spans several segments from quick service to upscale casual, had served on BJ’s board for three months before he was named president. Once appointed to that role, he says he saw his mission as steering the chain to a new niche, in between what he termed premium casual and mass-market casual.

“The concept itself was kind of on the fence,” he says. “It kind of had one leg in mass-market casual dining in terms of the menu items and how it was executed and operated. But it had one leg in premium, or polished casual, in its signature products and certain components of its facilities, and certain components of its brand positioning that were more differentiated and higher quality than a mass-market chain.”

What Deitchle says he has tried to do at BJ’s is get the company to evolve into what he calls a “casual plus” chain. In Deitchle’s view, that means a large, varied menu and upscale facilities at the price point of mass-market casual chains like Applebee’s, Chili’s and T.G.I. Friday’s. BJ’s check average is $12.50, Deitchle says.

Deitchle’s educational journey made him very familiar with the nose-to-the-grind-stone ethic required to thrive in the restaurant business. The Texas native went to night school for his master’s in business administration while working at Church’s Fried Chicken in the 1970s, and then labored for another four years in accounting classes, before sitting for the CPA exam in 1979.

“That MBA was in economics and really did not have a specific skill to sell to anybody,” Deitchle says. “That is how I got officially into the accounting and financial field. But I have never practiced public accounting. I have always been in business.”

Deitchle supplemented his traditional education by closely studying the concept founders that he worked with over his years at Church’s, Long John Silver’s, The Cheesecake Factory and Fired Up Inc., parent company of the Carino’s Italian Grill chain. He spent much of his time in positions overseeing the financial side of the business.

But his passion for foodservice was enlivened by the ways in which all aspects of the business weaved together.

Even with the success of BJ’s over the past three years, Deitchle has his eye on moving and shaping the chain so that it can continue to compete and grow.

His time at The Cheesecake Factory under Overton taught him the value of constantly improving the restaurant concept, Deitchle says.

“That is one thing that I learned from the master, David Overton, you know, you are never done with the evolution of your concept,” he says. “He is constantly thinking about ways to further differentiate and to make it even better for the consumer, and to keep that gap between his restaurants and everyone else that is trying to keep up with him.”

Deitchle is focused on improving all operational aspects, from the menu to the facilities, to keep BJ’s ahead of its competitors.

“Everyone looks at success and says, ‘You know what? We think we can emulate that; we think we can duplicate that; we are going to chase after those guys,’” he says, “which makes those of us that are a little ahead of the game run a little bit harder.”

In a Sept. 16 report, Piper Jaffray analyst Nicole Miller Regan said, “We reiterate our view that BJ’s is a good small company that has the potential to become a great growth-premium casual national concept.”

Even as macroeconomic challenges build to a crescendo, Deitchle is confident in the company’s growth plans. He says BJ’s expects to expand at an annual rate of 20 percent, with the eventual goal of 300 restaurants in the United States.

The chain has plans to finish 2008 with 82 restaurants.

“We have got plenty of room to grow,” Deitchle says. “We are only in 13 states today. We believe we can double the size of our business, just in our current 13-state footprint.”

That 300-restaurant goal is not carved in stone. The final tally could increase, as the national economy becomes more forgiving and the concept keeps evolving.

“Who knows?” Deitchle says. “As time goes on, as we open more restaurants, in different areas and of different types and sizes, we may consider increasing our estimate of ultimate domestic capacity.”

“We are trying to follow the mold of very few restaurant companies that have been able to achieve national growth, while at the same time enhancing their concepts and creating better experiences for their guests,” BJ’s founder Motenko says.

“We will have to consider the overall macroeconomic environment very carefully,” Deitchle says. “But nevertheless, in the long run, we have got quite a bit of room to continue our expansion.”