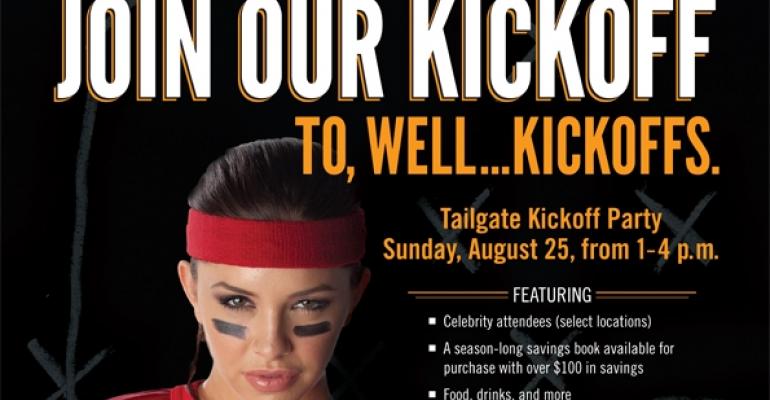 Smokey Bones is hosting a Tailgate Kickoff Party on August 25 at all of its 65 company-owned locations.
Marketing

Many large restaurant chains are beginning to roll out football preseason and fantasy football promotions in an effort to draw crowds and drive sales.

Smokey Bones Bar & Fire Grill announced Wednesday that the company would be hosting a Tailgate Kickoff Party on August 25 at all of its 65 company-owned locations. The goal: To drive sales throughout the season by making customers aware that Smokey Bones is a great place to watch football, said senior vice president of marketing Roger Drake.

Several Smokey Bones locations are also inviting football stars to help promote the restaurant, he said. Anthony Muñoz, formerly of the Cincinnati Bengals, and Dwight Stephenson of the Miami Dolphins, along with other football players and cheerleaders, are on tap for events at select restaurants, Drake said.

Although Smokey Bones is not typically billed as a sports bar — its focus is more on the food and experience, rather than sports, Drake said — football season is a big traffic driver for the chain during the fall.

Smokey Bones is introducing a limited-time offer of bratwursts and hot dogs in September. “What better tailgating food is there than dogs and brats?” asked Drake.

The chain is also planning to sell $5 coupon books that include special deals that can be used every week of football season. Every purchaser is eligible to win two tickets to the Big Game, he said.

The “Tavern Double Tuesday” promotion offers customers a free Red’s Tavern Double burger and bottomless steak fries every time the Broncos get two sacks during a game. The deal requires guests to purchase at least two beverages and a burger or entrée to get the free extra burger.

Although the promotion is targeted to specific markets, not all 475 Red Robin locations, the deal is still an important traffic-driver for the fall, said chief marketing officer Denny Marie Post.

Red Robin ran the same promotion last year, too, she said. This year, the promotion is being expanded to the Seattle Seahawks and the Chicago Bears in their respective markets. Seattle is already a big market for Red Robin, Post said, and Chicago is an emerging market.

“It’s another great way to keep Tavern Double in the conversation,” she said. “And it fits our overall desire to have a balance of men and women in our concept.”

Fantasy football has become wildly popular with consumers, too, with about 36 million fantasy sports players in the U.S. and Canada, according to a report by the Minneapolis Star Tribune. At Applebee’s and Hooters, fantasy football drafting parties are hosted as a way to draw groups of Fantasy Football players into their restaurants.

“We’re actively promoting fantasy football draft parties,” said Dan Smith, spokesman for Applebee’s. The promotions vary based on franchisee, he said, but generally include a draft board and draft guides designed by Anheuser Busch.

Many franchisees run drink and meal specials alongside fantasy football drafts, Smith said, but they vary widely from location to location. Applebee’s, a division of Glendale, Calif.-based Dine Equity Inc., has more than 1,800 locations systemwide.

At Atlanta-based Hooters, fans can register at HootersDraftParty.com and host their draft with friends. Every reservation comes with a free ESPN draft kit that includes $400 in deals, said spokeswoman Kelly Propst in an email. More than 350 Hooters locations hold draft parties, the company said in a statement.