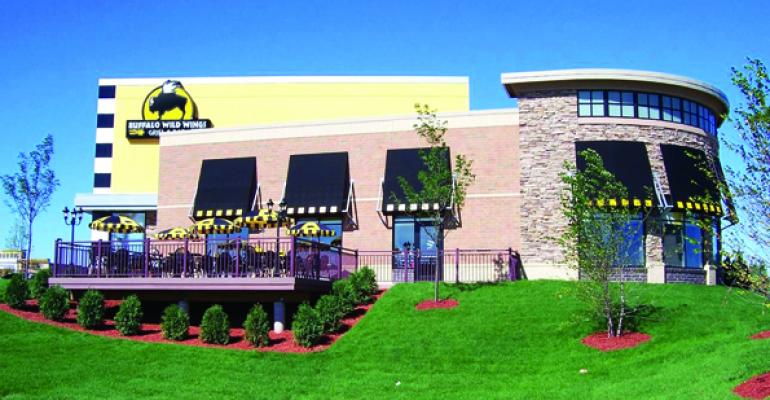 The nearly 850-unit brand’s new commercials and social-media photo-sharing contest revolve around customers’ ability to “protect the football” by watching games inside a Buffalo Wild Wings restaurant, thus having the ultimate experience with other true football fans.

In three commercials developed by the chain’s ad agency, Fallon, Buffalo Wild Wings customers celebrate being able to watch football in the right place with the right people, as opposed to being stuck with haggard neighbors with newborn kids, yuppies drinking wheatgrass, or the guy who brews his own beer. The spots debuted Monday.

“We know that game time is serious business, and we’ve all had a less than ideal viewing experience at one time or another,” Kathy Benning, Buffalo Wild Wings’ executive vice president of global marketing and brand development, said in a statement. “Our new campaign has some fun with those scenarios while reminding fans that at Buffalo Wild Wings, football is viewed the way it should be.”

Through Oct. 21, the brand also will host a photo-sharing contest on its Facebook page carrying the same “protect the football” theme. Fans can take pictures of themselves demonstrating how to protect the football inside a Buffalo Wild Wings unit and upload the photos to Facebook. Each week, the brand will vote on its favorite photo and show the winning entries in the restaurants and on TV commercials.

One finalist from each weekly contest will win a trip for two to the Buffalo Wild Wings Bowl in Tempe, Ariz., on Dec. 29; earlier this summer, Buffalo Wild Wings announced it would sponsor the college football bowl game, which will feature teams from the Big 12 and Big Ten conferences. A grand-prize winner from that group of finalists will get to participate in a photo shoot for an ad in an upcoming issue of Sports Illustrated.

Minneapolis-based Buffalo Wild Wings has more than 840 restaurants in 48 states and Canada.