/sites/all/themes/penton_subtheme_nrn/images/logos/footer.png
Recent
Recent
Panera experiments with robots
Dec 02, 2022
The Recipe of Success: What you can learn from James Corden
Dec 02, 2022
Quiznos parent company appoints Vanessa Fox as company’s first chief development officer
Dec 02, 2022
The third-largest pizza chain is ready for a war
Dec 02, 2022
DoorDash’s layoffs are not a time to panic: they’re a time to rethink the delivery industry
Dec 01, 2022
Featured
How 21 restaurant companies performed in their most recent quarters
Nov 22, 2022
How eco-friendly Seattle restaurant chain Just Poke is doubling in size in 2022
Nov 17, 2022
In the Mix this week: White Castle’s culture, a CREATE recap, Denver’s restaurant scene and more
Oct 27, 2022
How this emerging brand is planning on nearly quadrupling in size in just one year
Oct 21, 2022
NRA Show
brought to you by 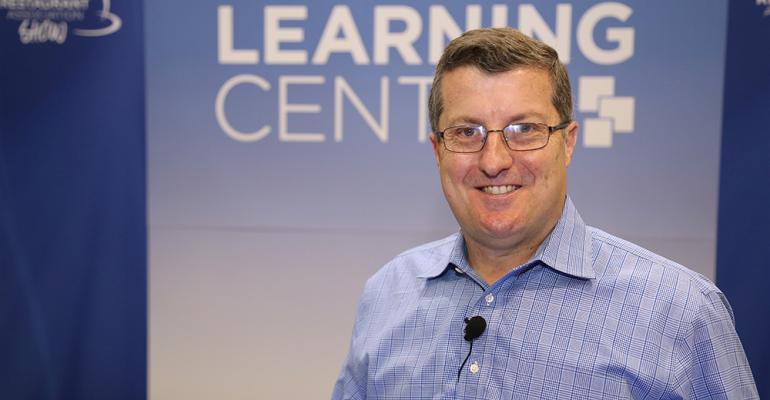 With the U.S. unemployment rate at 3.9 percent in April, restaurants are finding hiring and recruiting workers to be a difficult task, but NRA Show presenter T.J. Schier said operators can overcome the challenges and assemble a talented team.

Schier, president of Dallas-based SMART Restaurant Group, a Which Wich franchisee, and author of “Send Flowers to the Living: Rewards, Contests and Incentives to Build Employee Loyalty,” offered suggestions in a presentation on Saturday titled “Hire, Train, Reward, Retain: Building a Team of Top Performers.”

Schier said his Which Wich quick-service restaurants in the Dallas, Houston and Austin, Texas, markets have teams that produce volumes 30 percent to 40 percent higher than the system average.

Related: Highlights from the 2018 MenuMasters Awards

“We measure performance and guest satisfaction, and we hire and train people to deliver,” Schier told a packed audience at the NRA Show’s Learning Center.

Maintaining a restaurant’s culture of high performance requires hiring so-called “A Players” and getting rid of “C Players,” Schier said. That begins with hiring top workers, he said, which requires measuring their ability to perform. Hiring teams need to gauge potential employees’ behaviors.

“We ask them soft-ball questions just to reinforce our gut feel, but we don’t actually measure anything,” Schier said.

Restaurants need to define the skills and traits by position and then hire workers that match those definitions, he said.

Schier also said restaurant operators need to recruit in the right places, or “fish where the right fish are.” Employing the analogy of the best place to catch a shark — in an ocean, not in a lake — Schier suggested posting job recruitment ads where potential workers are most likely to see them. On Craigslist, for example, he suggested posting on Saturday morning, “because that is when most people are looking.”

Schier also endorsed the use of social-media recruitment, especially with the use of hashtags that figure into searches on platforms like Twitter and Instagram, as well as links to videos, which appeal to younger applicants.

Also, operators need to communicate with these younger employees, especially those under 25, in a way they prefer, such as using texts instead of emails.

At his Which Wich units, Schier has found incentives have worked to increase employee attention to sales opportunities, such as catering events. He offers workers 10 percent of the sales in catering events they might successfully bring into the unit. That led to one staff member to snag an opportunity to cater a school debate tournament that earned her $295 of the $2,950 total.

“I wrote the check, but then she asked if I could send a picture,” Schier recalled. “This is where the old dog learns new tricks. What did she want to do with the picture? She wanted to put a montage on social media. Boom! This is my recruitment ad now: hourly incentive pay.”

“It will marginally change your B Players, and your A Players will go to A-plus,” he said. “You’ll make the bulk of your money off your A and B Players.”