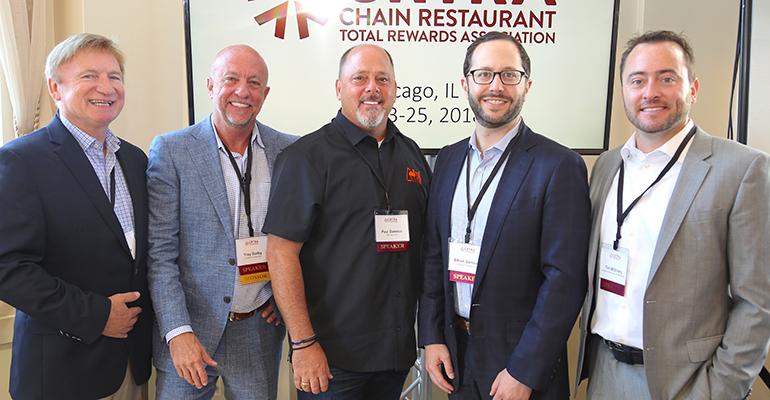 The quickening shift in restaurant sales from in-store dining to carryout and delivery is changing how human resources departments recruit and retain workers, leaders of four growing organizations said Monday.

“We will see a material shift in the next couple years in how HR is viewed within the boardroom,” said Paul Damico, CEO of the 39-unit Chicago-based Naf Naf Grill LLC. “In the past, it was just this silent force that was there and kept us out of trouble.

“I see a shift in where we are going, to want to hear from HR more and more about how they are helping drive the business,” said Damico during a panel discussion Monday at the Chain Restaurant Total Rewards Association conference in Chicago.

In the next five years, Damico added, studies indicate 50 percent of restaurant sales will come from outside the four walls of the restaurant.

“That’s going to be delivery and online ordering,” he said, and it will require human resources to work with trainers on new positions that will evolve to accommodate dealing with third-party or in-house drivers, working separate to-go lines and operating separate point-of-sale systems.

Damico said restaurants’ hourly employee base has changed significantly in the past 10 years and will see more in the next 10.

Damico said about 95 percent of Naf Naf Grill’s units now have dual lines, one of which is designed to accommodate to-go and delivery orders.

“There are so many more complexities within the box today that not only the manager has to deal with but down to what the hourly employee has to deal with,” he said. “How are we going to get them ready and make them comfortable?”

Growing off-premise sales have also altered restaurant design and packaging, said Kinsey of Oak Brook, Ill.-based Portillo’s, which has more than 50 units. Portillo’s introduced delivery at nearly all its locations in November.

“We spent a lot of time engineering the packaging so it holds the fries and keeps the shakes better,” he said. “We are also redesigning our restaurants to extend that to-go area and have it staffed by different people with different training and different hospitality skills. And they have different skills on the computer to track the orders.”

Portillo’s units can have between 150 and 200 employees per restaurant, and they have to be able to accommodate drive-thru, walk-up and delivery courier guests.

“It’s definitely changing how you operate a restaurant,” Kinsey said.

Samson of Lettuce Entertain You, who said that delivery has become a significant part of sales volume, noted that third-party delivery shifts risk to those platforms.

“It’s important for us to look at the delivery platforms as an extension of the guests,” Samson said. “We interact with our delivery partners regularly and make sure they are integrated into our secret-shopper ratings program.”

Samson said LEYE instills its service values in delivery company partners so they can relay that to the guest.

To help develop leaders within the LEYE organization, Samson said the company developed a leadership workshop over the past three years to give promising operators and corporate employees additional leadership tools.

“It’s really important for them to develop the team behind them,” he said. “It’s essential not only to our success but to their success as leaders. We say, ‘You are not ready to step and advance your career until you’ve got the person behind you ready to step into your place.’”

McEnery said the Orland Park, Ill.-based Cooper’s Hawk, which is looking at creating an airport version of the full-service concept, considers it important for employees to develop their successors before moving into a new position in the growing company.

“At Cooper’s Hawk, that’s the whole game,” said McEnery, who started washing dishes in a restaurant at age 12.

This past year, Cooper’s Hawk created an employee program called “Driving Development,” McEnery explained, that includes a scorecard to track the development of others as well as the opportunity to earn a car.

Workers get points for developing others and points for those who move into other positions and locations. The BMW car prizes go not only to general managers but also executive kitchen managers.

So far, Cooper’s Hawk has awarded cars to 20 people in nine states because they have helped develop the next wave of leaders, McEnery said.

The CRTRA, established in 1976, has more than 100 company members that represent more that 150 restaurant brands. Its members look at such topics as employee compensation, benefits, paid time off and work/life balance.