On loving and losing teen labor

How teens helped define fast food, and where the industry is without them

When the McDonald brothers surveyed their restaurant, they saw inefficiencies and lost opportunities. Their chefs cost them too much. Their carhops where bringing in the wrong crowd — teenage boys who ogled the youthful, female skaters and didn’t purchase much.

Making burgers the traditional way and skating meals out to customers was just too slow.

“They decided to dump the carhops and dump the cooks, created very simple tasks that anybody could do, and they targeted teenagers in particular because they were low cost,” said Andrew Smith, the author of numerous books on the history of food including “Fast Food: The Good, the Bad and the Hungry.”

Teenagers were part of Dick and Mac McDonald’s plan for efficient, inexpensive meals. They could work the assembly line with minimal training and at minimal cost, said Smith.

These changes were made way back in the late 1940s, but, Smith points out, the economy didn’t look too different from today — unemployment was low and many young people were attending college. At the time, college students were frequently servicemen returning from World War II. Today, nearly 70 percent of high school graduates age 16 to 24 are enrolled in colleges or universities.

McDonald’s led the “fast food revolution,” employing young, unskilled workers and developing automation and efficiencies. Other fast-food restaurants were quick to follow, said Smith. There was an obvious reason for this switch to younger workers, he said — it was a successful labor model, and it was cheap.

For decades, fast-food restaurants relied on teenagers to take orders, flip burgers and generally run much of the day-to-day operations of the restaurant. Working with teens had its benefits and problems, but the cost benefits couldn’t be denied.

But today, teenagers’ lives have become increasingly complicated and loaded with pressures.

For many young people, traditional fast-food restaurants no longer appeal to them as a job opportunity.

While some fast-food brands have found ways to keep teenagers excited about positions at their restaurants, many struggle with the new reality.

Fast food and the teenage employee

“Fast food has always relied on the lowest possible cost of service,” said Rosemary Batt, a professor at Cornell University’s School of Industrial and Labor Relations. 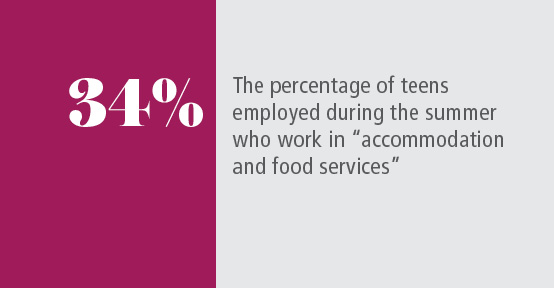 Fast-food restaurants could pay teens less than adults with the understanding that they were not raising a family.

“They view teens as kind of earning what we used to call pin money, supplemental income for incidentals,” said Batt.

The arrangement between fast-food workers and teens was often mutually beneficial. Teens were generally available part-time and over the summers, which was perfect for the dinner rush and high-volume warmer months.

And teens are often energetic and able to perform restaurant work, which can be physically demanding, said Jerry Newman, a professor of organization and human resources at the School of Management, University at Buffalo. 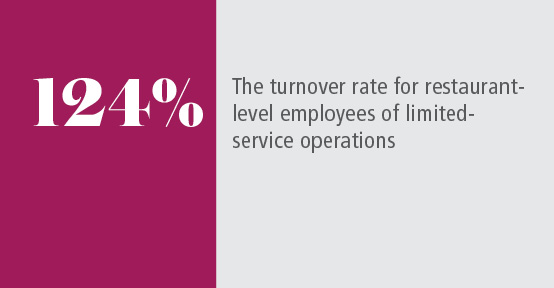 Newman knows something about this kind of hard work. He wrote the book “My Secret Life on the McJob: Lessons in Leadership Guaranteed to Supersize Any Management Style” and worked in quick-service restaurants as part of his research.

Fast-food work is a tough job, but historically, at least, teens wanted a job.

Teen labor, defined as 16-to-19-year-olds by the Bureau of Labor Statistics (BLS), reached its peak in 1979 with over 57 percent of teens in the labor force. Participation has declined over the years, but even as recently as 2000, over 50 percent of teens participated in the workforce. Today that number is around 30 percent. The BLS expects the downward trend to continue.

Summer jobs were particularly popular with teens and the fast-food restaurants that employed them. Today when teens do take summer jobs, 34 percent still work in “accommodation and food services,” according to a Pew Research Center analysis of BLS data. But the declining number of overall teens working during the summer has caused a downturn in applications.

What teenagers (and their parents) want now

“The image of fast food as being a job for teenagers is long gone,” said Batt. Her own national data shows that the average age of a fast-food employee is 24 years old.

So, what are these teenagers doing if not working the register at their local fast-food joint? Video gaming? Snapchatting?

“In a teenager’s 24-hour day, except for sleeping, school activities take up the largest amount of time,” according to a BLS article on teen labor from last year.

Summers are packed with summer school and college prep. In fact, 40 percent of students were enrolled in school during the summer in 2016, compared with about 10 percent in 1985.

“My observation is that increasingly teens have wanted to get jobs that would prepare them for college or give them better experiences, and that their parents want that too,” Batt said.

“Rather than having a 17- or 18-year-old work at McDonald’s just to make money for the summer, those parents want to see their kids get the kind of experience that will help them enter into college or get a job out of college.” 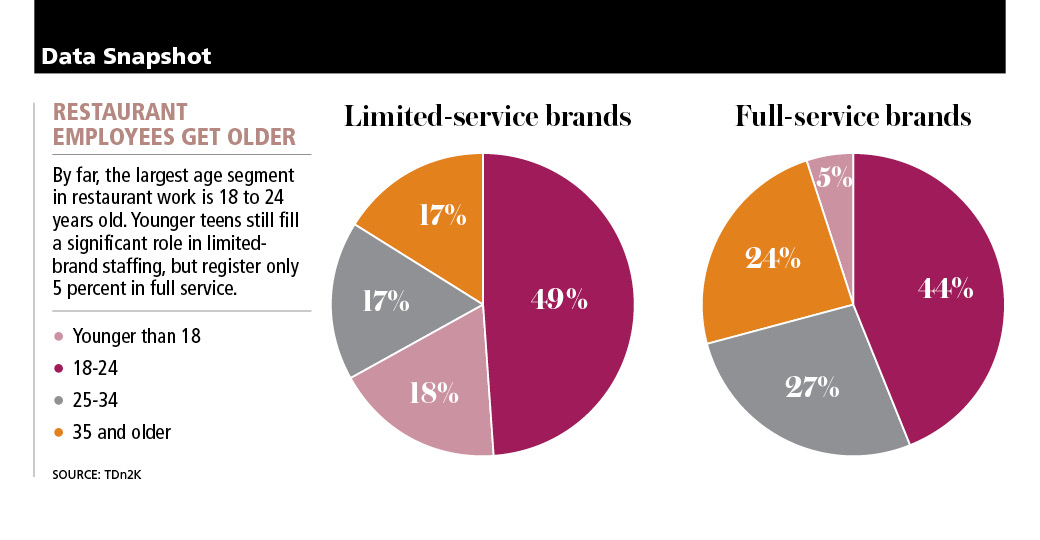 “The move away from teenage fast-food jobs is related to the fact that there’s an ongoing increase in the competition for good jobs and the competition to get into colleges, so it’s driven by those external factors, not just if a teenager feels like working at McDonald’s or not,” she said.

The wage wars: No longer working for “pin” money

As Newman sees it, fast-food executives were looking for an alternative to teenage labor for at least a decade. There’s a “systemic unemployment” when it comes to hiring teens. They go back to school after summer break, or they’re ultimately looking for something else.

At this point, only 18 percent of restaurant-level employees at limited-service brands are younger than 18 years old, according to Tdn2K. At full-service brands, only 5 percent.

Whether fast-food brands moved away from hiring teens out of necessity or desire, these older employees have different needs — health care, days off, income that wasn’t for incidentals.

“These individuals are working there with some continuity, they talk to each other, they express dissatisfaction,” said Newman.

“Now [fast food is] facing workers who are a lot more strident about getting better wages. Fast food doesn’t object to giving higher compensation, but they’ve got to keep their cost down for their food because the major competition for them is against fast casual and other kinds of dining. The major point [of fast food] is lower cost. So, the more they have to pay in wages the tougher it becomes to compete against other kinds of chains.” 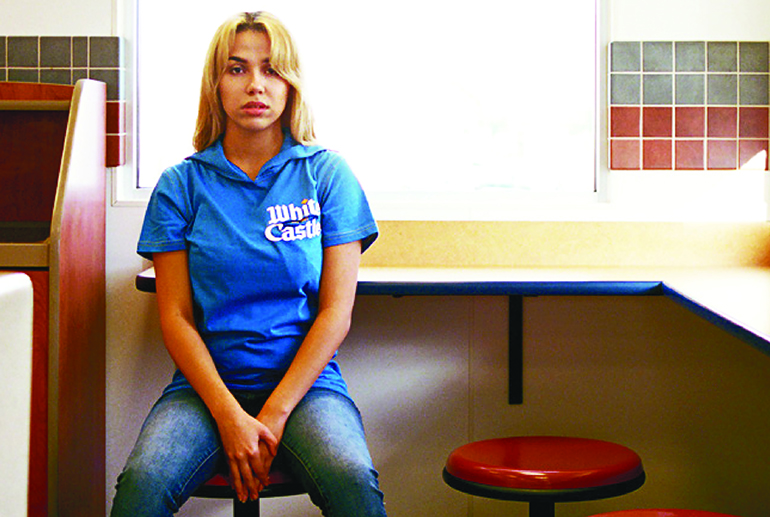 White Castle gets high ratings from its employees, about half of whom are under 23 years of age. Pictured is Tatanya, a worker at White Castle.

As employees became more mature, Service Employees International Union and the Fight for $15 stepped in to organize employees and work toward higher wages. So far, they’ve seen a fair share of successes. Wages for fast-food workers are on their way to $15 an hour in New York, California, Seattle, Minneapolis and Washington, D.C. Their efforts have brought to light workers’ limited bargaining power and low wages.

With a rise in wages, higher prices might be passed on to consumers, as has been seen in cities that have made wage increases but, Batt argued, these prices will be small and palatable, particularly if the increases happen over time. The wage increases would help with employee retention.

“The idea is that you invest in the workforce that you have, and you reduce turnover, so you don’t have to go on the labor market as often,” she said.

According to restaurant analytics firm TDn2K, the latest turnover numbers for the restaurant-level employees is 124 percent for limited-service brands and 100 percent for full-service.

To illustrate that simply, if you had 50 workers at the start of the year, all of them will have quit by the end. Some of their replacements will have quit, too, if you’re a limited-service brand. 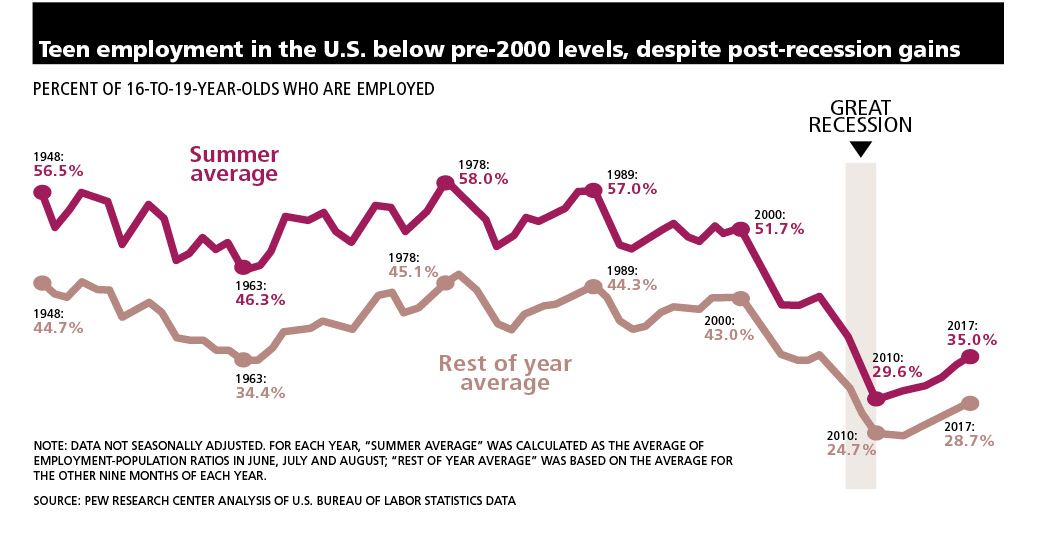 Where the carhops still skate and the uniforms look great

Some fast-food brands have turned toward automation and technology, like kiosk ordering, to reduce the number of employees they have to hire. Others have boosted their teen employee rate and retention with incentives that appeal to young employees and their parents like tuition reimbursement. But some quick-service brands haven’t seen a decline in younger workers at all.

At White Castle, almost half of their employees are under 23, said Jamie Richardson, White Castle’s vice president of government and shareholder relations. Richardson credits this to the brand being established in neighborhoods that have higher underemployment. And the fun environment and cool new uniforms designed by popular fashion brand Telfar don’t hurt either.

“We think when you’re 17 or 18 everyone wants to be treated like an adult,” said Richardson. According to internal surveys, over 90 percent of employees who are 25 or younger have a good understanding of what White Castle’s business goals are. The brand also rates at almost 90 percent in its engagement score with these employees.

It’s possible, too, that teens want to be treated like teens.

“We have a lot of 16-, 17-, 18-year-olds that love to be on skates,” said Anita Vanderveer, the vice president of people at Sonic Drive-In where carhops still reign.

“They love listening to music, and they feel like they’re working out.”

The carhops at Sonic might be a throwback from another time, but how the company hires and retains these employees has undoubtedly changed.

There’s a student leave of absence program so teens can take the school year off and head back to Sonic and to their skates every summer without missing a beat. Sonic has been very strategic with recruitment, Vanderveer said, including a “text to apply” option so applicants can apply for the job from their phones.

“As you can imagine, tech not only attracts the consumer but over the years we’ve had to get wise to attract the candidates as well.”