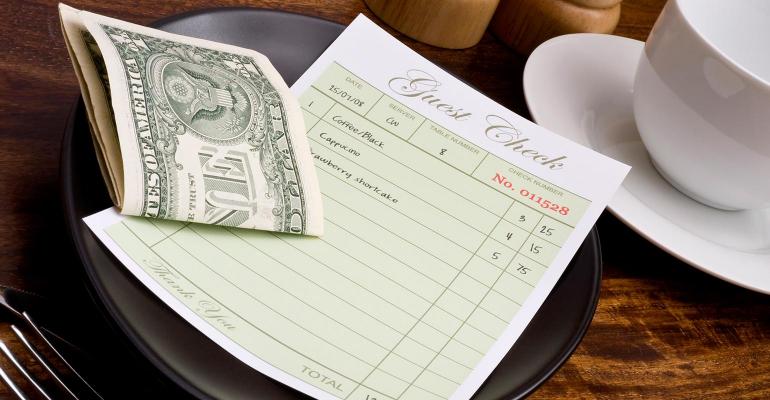 BrianAJackson/iStock/Thinkstock
Here's how the changes in minimum wage could affect your menu pricing.
Operations>Workforce

A calculator created by operator-run activist group, RAISE: High Road Restaurants, using data from UC Berkeley and Harvard economists released on Tuesday is illustrating approximately how much future wage jumps will require operators to increase their menu prices, based on current subminimum/tipped wages and non-tipped wages.

Although the Raise the Wage Act — which would phase out the subminimum tipped wage and gradually raise the national minimum wage from $7.25 to $15 per hour by 2025 — has only thus far been passed for federal workers, economists think it’s only a matter of time before $15 per hour is a reality. Currently, the subminimum tipped wage (which exists in 43 states) is $2.13.

Related: Delaware becomes the 10th state (plus Washington, D.C.) to raise the minimum wage to $15 an hour

The concern among restaurant operators, particularly in states where the minimum wage is less than half the proposed hourly wages, is “how will we afford this?”

The calculator was created to answer this question in some part. High Road Restaurants is a subsidiary of nonprofit activist group One Fair Wage, which advocates for the abolishment of the subminimum wage for tipped workers. The data used for the calculator, however, is based on an independent study by the Institute for Research on Labor and Employment at US Berkeley.

One Fair Wage introduced the calculator, along with a report on how “Restaurants Can Provide Livable Wages” on Tuesday, with solutions like modest menu price increases, mandatory service charges, and hospitality fees included in customer bills.

“Many employers across the country are voluntarily raising their wages,” Saru Jayaraman, president of One Fair Wage said Tuesday during a virtual press conference. “They are raising their wages because they want to attract workers to come back because workers are saying, ‘we don't want to come back without a livable wage with tips on top.’ […] The point of the guide is to show that it absolutely can be done to raise wages and phase out the subminimum wages in a profitable way with moderate price increase of 20% at most.”

We inputted some data into the calculator based on current average salaries of workers at major chains and the average price of their most popular menu items. Here is what we found:

Cost of Grande Caramel Frappuccino in Atlanta, Ga. on DoorDash: $4.25

(Defined by Chipotle as a part-time worker in Illinois)

Cost of base burrito bowl in Illinois: $9.05

Cost of Big Mac in suburbs of Illinois on Uber Eats and DoorDash: $5.29

Cost of chicken sandwich in the suburbs of Illinois: $7.29

Cost of stack of buttermilk pancakes in Illinois: $7.49