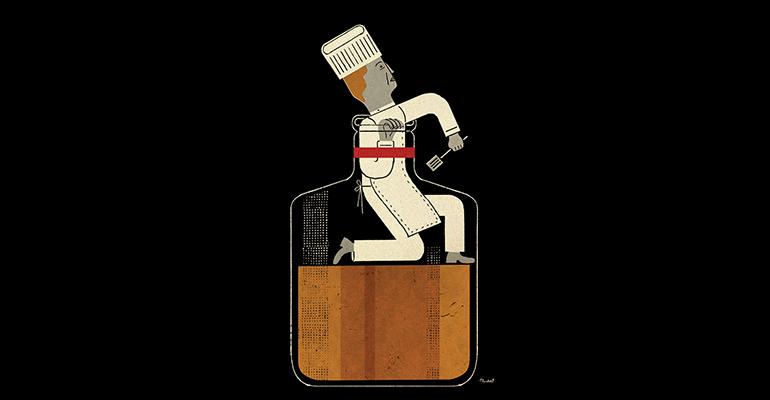 Coming Clean: Recovering from a culture of substance abuse

A letter from the Nation's Restaurant News editor-in-chief

In this in-depth investigation, NRN looks at how restaurants can recover from a complicated relationship with substance abuse.

Related: 7 things to know about the opioid crisis My grandmother has a saying: “You’ll get used to it, like the man hanging.” Growing up, the seeming contradiction of this drove me crazy; after all, you don’t really get used to a noose around your neck. But now, I take her saying to mean that difficult circumstances always resolve themselves — one way or another. The restaurant industry cannot go on hanging in there, ignoring its problematic relationship with drugs and alcohol. Else, the resolution will continue to be unfortunate.

Long hours, low wages and a shift-drink culture continue to take their toll on employees. Hospitality and foodservice ranks number one for illicit drug use, according to the federal Substance Abuse and Mental Health Services Administration.

The opioid epidemic ravaging the country is adding to the complexity of the problem.

“There is no question that staff at restaurants and owners of restaurants are in increasing numbers suffering from opioid addiction because there is no segment of our society that has been spared from the opioid crisis. It is affecting every socioeconomic group,” said Andrew Kolodny, the co-director of Opioid Policy Research at the Heller School for Social Policy.

* The full title of this category is “Management of companies and enterprises, administration, support, waste management, and remediation services.”
Source: Substance Abuse and Mental Health Services Administration, based on surveys taken from 2008 to 2012.

Despite the rampant substance abuse in hospitality, many restaurant operators declined to discuss how they handle the issue at their companies. Nation’s Restaurant News editors were turned down again and again for interviews.

We applaud those sources who were brave enough to talk about handling the restaurant industry’s problem. NRN named this report Coming Clean because it’s time to acknowledge the industry’s history of substance abuse. Without an honest reflection on the status quo, there is no opportunity for change.

In the following stories, we made sure to share stories from restaurateurs and chefs who battled with addiction and found a way to continue their restaurant careers.

“The whole lifestyle — you’re in a place that has alcohol. There’s always alcohol in the kitchen, behind the bar, and, after the adrenaline of an awesome service, it was typically followed by chasing that buzz with alcohol and then usually cocaine. That was just how we rolled for a really long time, and it got dark for me,” said North Carolina chef Scott Crawford.

Crawford was told he needed to leave foodservice to recover. Yet he stayed.

“I wanted to challenge the notion that you can’t be sober in this industry, and I did.”

While the hard-partying kitchen culture still exists, several restaurant companies are working to change that through efforts like banning drinking on the job.

And there are more outside resources than ever to help employees with addiction problems. One, Ben’s Friends, is an AA-style group that caters to the specific issues of hospitality workers.

Amid competition for talented labor, restaurant companies are also starting to take a holistic approach to benefits. From offering substance abuse treatment to assigning more reasonable work hours, restaurants are finding ways to encourage employees to stick around for the long haul.

There is still a long way to go. However, foodservice remains an industry of opportunity. Americans’ continued obsession with food and cooking already positions the food world as a desirable place to build a career.

One of the things I love about restaurants is the rich variety of backgrounds of the people who work in them and own them. You don’t have to follow a traditional path to make it in the industry. Likewise, restaurants don’t need to follow the traditional intoxicant-soaked path to be successful.

Read on for a hard look at how the shift-drink culture is changing, how opioids are impacting restaurants and what resources are helping foodservice employees.

Read more:
Is the notorious world of restaurant partying taking a sober turn?
Why the opioid crisis is a restaurant crisis
Beyond AA: Where restaurant workers go for help
7 practices to avert substance abuse in restaurants
Ron Eyester on sobriety: 'I've honestly never felt worse'
Staying sober while running a whiskey bar
Do you have to leave foodservice to stay sober?
Column: A restaurant employee, an opioid addict, my son
7 things to know about the opioid crisis