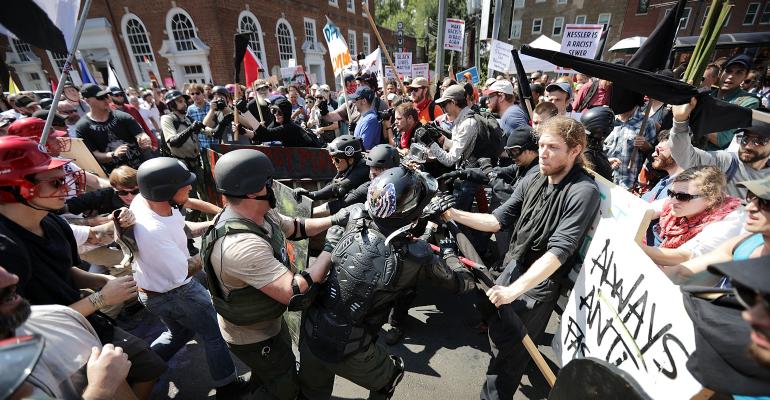 The deadly protests in Charlottesville, Va., earlier this month raised difficult questions about how employers should handle the off-the-clock conduct of their workers.

What was called a “Unite the Right” rally to oppose the removal of Confederate statues began with a torchlit march by white supremacist and neo-Nazi groups in Charlottesville, escalating the next day into a violent clash with counter protesters that left one woman dead and 19 people injured.

In the days following the event, the restaurant Mojo Burrito in Chattanooga, Tenn., terminated a worker who attended the rally.

In Minnesota, Uptown Diner let two employees go after they posed in Nazi uniforms in photos posted on social media.

And in California, a worker who was pictured in a social media post at the rally left his job at Top Dog in Berkeley. The restaurant told the Los Angeles Times that the worker resigned, but, in an unusual move, the operator taped a sign to the door publicly announcing the employee’s departure. The sign stated: “The actions of those in Charlottesville are not supported by Top Dog. We believe in individual freedom and voluntary association for everyone.”

While many have praised the restaurant operators for taking a zero-tolerance stand against bigotry and hatred, others have expressed fear of a return to McCarthyism.

And with more protests expected, some are asking: Can employers take action against workers for what they do on their own time? Attorneys say the answer depends on where the business is located.

Some states, however, have laws that prevent employers from terminating workers for lawful off-duty conduct, including California, Colorado, North Dakota and New York. Others, like Louisiana, have laws that protect certain kinds of political activity.

“You’d really want to make decisions on a case-by-case basis. This is not one size fits all for employers,” Bosley said. “You’re going to want to involve legal counsel.”

In jurisdictions where a business owner can take action against a worker for participating in a rally, that doesn’t mean he or she should, said Tom Spiggle, founder of The Spiggle Law Firm in Arlington, Va.

“Most people believe that an individual should have the right to express their own political leanings without getting fired,” he added. “When an employer fires somebody, they’re going against the grain and possibly will alienate part of their workforce.”

Taking action against a worker because of off-duty activities is a complex issue, said Kelly Hughes, co-chair of the retail practice group at the law firm Ogletree Deakins Nash Smoak & Stewart PC in Charlotte, N.C.

Restaurant operators should not only consider legality, but they should look at the incident’s potential impact on the workplace and how it reflects on their business.

“If there’s a picture of a worker holding a sign that uses racial epithets, for example, I would feel comfortable supporting a company’s decision to terminate that employee, because the employee is making a statement that would be absolutely unacceptable in the workplace,” Hughes said.

While the Charlottesville incident has added fuel to an already enflamed political climate, employers should also consider how they’ve handled protests in the past to ensure consistent treatment, she added.

“Where you can get into trouble is if you knew about similar, or more severe, conduct in the past and didn’t act,” Hughes said. “Are your employees going to see inconsistencies in the company’s reaction to discriminatory treatment of one group versus another? Are they going to say, ‘My employer quickly issued a strong public statement condemning the Charlottesville situation, but they said nothing after the Orlando shooting,’” which was seen as an attack on the LGBT community.

In the reported cases of employee terminations since the Charlottesville events, the restaurants cited either declined to comment further, or did not respond to requests for comment.

But Eve Williams, president of Mojo Burrito in Chattanooga, explained in a Facebook post that the restaurant felt terminating the employee was necessary, given the volatility of the situation.

“On a personal and professional level, we pride ourselves on diversity, inclusion, equality and sense of community,” Williams wrote. “We apologize to those who are hurt or offended and will continually work to insure the safety and happiness of our guests and employees as we have for the last 15 years.”

Likewise, Uptown Diner in Minneapolis explained the incident and denounced neo-Nazis and white supremacy in a Facebook post.

“Hate and bigotry have no place in society,” the restaurant wrote. “We are committed to fostering an inclusive, welcoming environment at our restaurant and in our community.”

In both cases, public responses to the Facebook posts were overwhelmingly positive. But Top Dog received criticism on Facebook, in part because of its earlier libertarian leanings.

Going forward, employers will have to weigh the risks, Bosley said.

“In some states, discipline [of a worker] will have some risks to it, and the employer will have to carefully think it through,” Bosley said. “They’re going to have to ask, ‘How have we treated other types of political activities, and, if we are going to treat this one differently, why are we treating it differently?’”

While emotions have calmed somewhat since the Charlottesville events, the debate will not likely go away soon, he added.

“This is the new normal for a while, I think, in terms of how do you deal with events like Charlottesville,” Bosley said. “We’ll be seeing it on both sides for a while.”