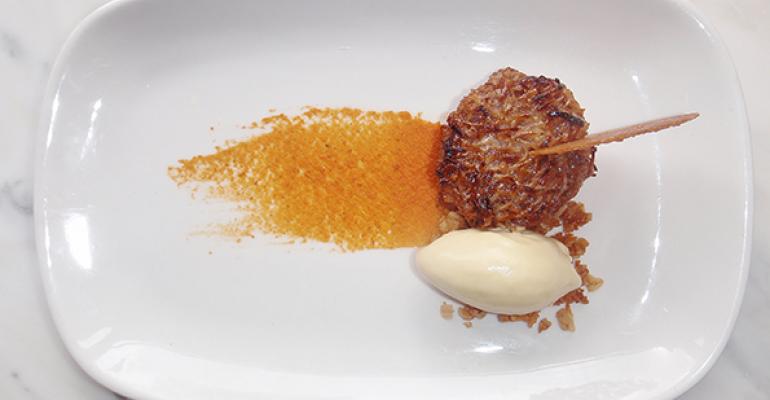 A look back at trends that dominated menus this year

This year, the desire to keep things interesting at the end of the meal had pastry chefs across the country getting creative. Here’s a look back at some of the tastiest dessert trends that dominated menus this year and will likely continue into the new year.

Desserts for two (or more)

Diners didn’t seem to want to indulge in decadent desserts alone, and chefs obliged by creating a plethora of options designed to share and even inspire socializing.

Many chefs added a classic dessert for two, such as the Chocolate Mousse Bowl for Two, a salad bowl filled with creamy chocolate mousse and topped with whipped cream, caramel sauce and hazelnut crunch, at Founding Farmers in Washington, D.C., while others kept popular desserts for deuces on the menu, such as the Tarte Tatin for Two made with Golden Delicious apples and served with crème fraiche at Alain Ducasse’s Benoit in New York City.

And though it was meant for two, three could easily share the Trio of Chocolates for Two, featuring chocolate mousse cake, profiteroles with vanilla gelato and mocha pot de crème at Kellari Taverna in Washington, D.C.

With brown liquors “on fire,” as chef Jason McClure of Sazerac in Seattle put it, this year more bourbon began showing up, not just at the bar, but in desserts as well.

McLure’s contribution to the boozy trend is Banana Bread Pudding with Whiskey Sauce, a riff on the classic Bananas Foster, with sliced bread that is layered with bananas, pecans and a hard sauce made of whiskey, egg yolks and sugar.

The pastry team at Red Star Tavern in Portland, Ore., has Bourbon Apple Fritters with brown butter honey glaze and bourbon cream on its menu.

Also in Portland, Three Degrees features an upside-down pumpkin cake on its menu, with pecan-bourbon ice cream and toffee sauce.

There was no shortage of dessert mashups this year, in which chefs married traditional and modern elements to create new but familiar creations.