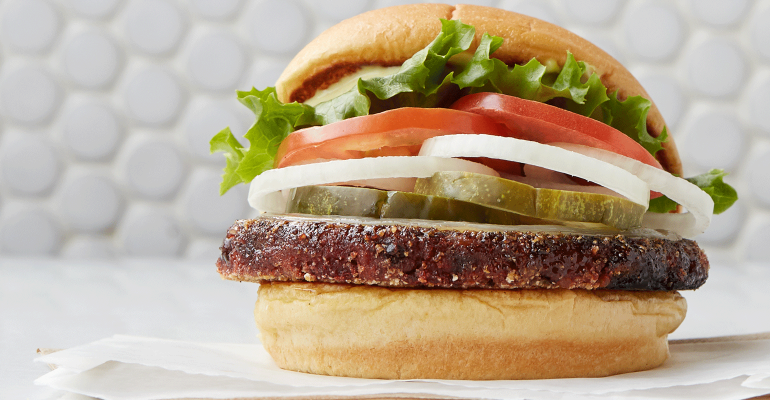 The Veggie Shack patty is made with black beans, brown rice and roasted beets, and it’s topped with provolone cheese, lettuce, tomato, onions, pickles and a vegan mustard-mayonnaise blend. The burger is priced at $7.29, the same as the chain’s other premium burgers.

The burger can be made vegan by removing the cheese and using a gluten-free bun or lettuce wrap. The Martin’s Potato Roll that is typically used for the chain’s sandwiches contains trace amounts of dairy.

Mark Rosati, culinary director of New York City-based Shake Shack, said the veggie burger was in development for about six months and joins the more indulgent ’Shroom Burger, a fried portobello mushroom filled with melted Muenster and cheddar cheeses, and topped with lettuce, tomato and ShackSauce, priced at $7.29. That burger is also part of the Shack Stack, which includes a cheeseburger, for $10.49. “While we love the umami richness of the ’Shroom Burger, it does represent an indulgent side of the vegetarian spectrum,” Rosati said in an email via a spokesperson. “We wanted to create something on the lighter side that was equally as fun and enjoyable.”

The Veggie Shack was introduced at the six locations — Midtown East, Upper East Side and Astor Place in New York City; West Hollywood and Glendale in the Los Angeles area and at The Domain in Austin, Texas — on April 19 as an app exclusive, and then was made available to all customers on April 24. No end date has been set for the test.

“We’ve been hearing a lot from our guests about their desire for a lighter veggie option, so we’re excited to see what they think,” Rosati said.

A previous version of this story incorrectly stated that this vegetable burger was rolled out systemwide. In fact, it is only in test in a total of six locations in New York, Los Angeles and Austin, Texas.
TAGS: Marketing Consumer Trends Food Trends Fast Casual
0 comments
Hide comments
Related
Sponsored