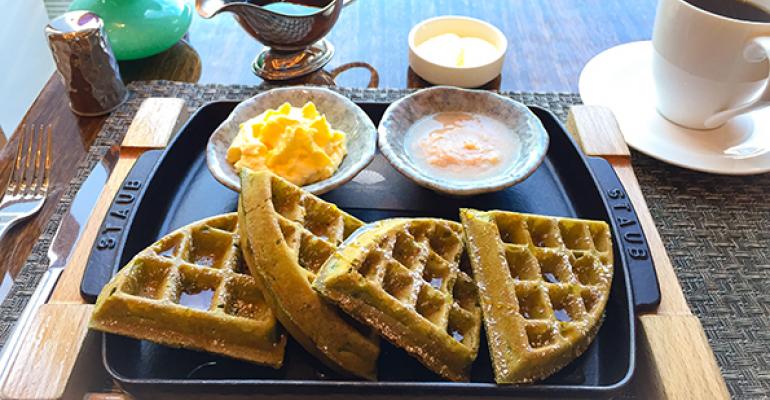 The popularity of tea in dishes is strengthening among consumers

If you were to read the tea leaves, they would surely point to this: Tea is trending on menus — not as a British-style break or post-meal calm down — as an ingredient in appetizers, entrées and other main menu items.

Like a tea bag newly dunked in hot water, it’s a trend that has not yet reached its full strength, but one that is already showing strong growth and potential.

At Sable Kitchen & Bar in Chicago, executive chef Lawrence Letrero draws on his Asian heritage by offering tea-smoked duck flatbread. Letrero takes the traditional northern Chinese technique of smoking dried chicken with tea-infused wood, and applies it to duck. The tea-smoked duck is shredded and then added to a wood-fired flatbread pizza with house-made hoisin sauce, pickled carrots and daikon.

“Depending on the type of tea you use, it can add a very distinct, earthy flavor,” Letrero said. “I like smoking tea because it imparts more depth and adds another dimension to the flavor layers of the dish.”

Added to the menu last November, Letrero says the duck flatbread sells very well. He said he plans to continue to experiment with tea on his spring menu, this the time with genmaicha, a toasted rice tea. He’s still playing with ingredients for the new item, but says he’s leaning towards scallops with bonito flakes, sweet corn and toasted rice tea steeped with dashi.

MOzen Bistro, an Asian restaurant at the Mandarin Oriental in Las Vegas, is using tea as an ingredient for its health and wellness benefits. The restaurant is currently serving a Green Tea Waffle at brunch. It’s made with stone-ground matcha tea powder and served alongside lychee compote and a passion fruit crème.

“We have taken a wellness and healthy approach in our menu creation. We planned to put this together in our new à la carte brunch menu and came up with the green tea matcha waffle,” executive chef David Werly said.

Introduced to the brunch menu in October, the green tea waffle has become a customer favorite.

While tea is most commonly menued at restaurants serving Asian cuisines, it’s spreading to other restaurants, too.

The potential for tea can be seen not just in the creative ways some chefs are menuing it, but also in that it has already popped up on menus at two national restaurant chains.

When chef Cliff Pleau joined Bonefish Grill in October 2014 as vice president of research and development, one of his first menu changes was adding steamed edamame sprinkled with green tea sea salt.

“We wanted to enhance the flavor and make it a little exotic, yet keep it simple,” Pleau said. “The green tea and the sea salt mix provide a subtle ethnic flavor coupled with an aromatic quality.”