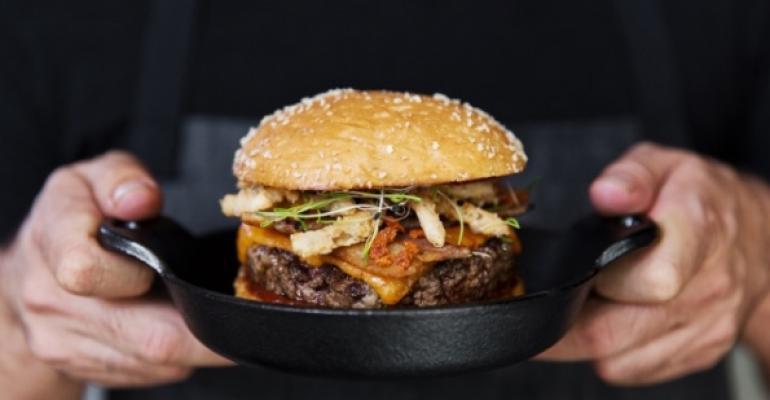 Like hot sauce spreads across the tongue — in a gradual journey that leads to an intense burn — Korean flavors and ingredients have traveled from the streets of Los Angeles to menus at brick-and-mortar restaurants across the country.

Dean Small, founder and managing partner at Synergy Restaurant Consultants, has been following the trend since 2009, when the first Kogi Korean BBQ To Go food truck began roaming the streets of L.A., igniting Americans’ desire for the flavors of Korean cuisine. Small said Korean flavors, especially ingredients such as the fermented cabbage kimchi and gochujang, a fermented chile paste, are becoming ubiquitous on the menus of creative chefs.

Among the many chefs getting creative with Korean is Ernesto Uchimura, executive chef of Plan Check Kitchen + Bar in Los Angeles. Uchimura uses both gochujang and kimchi in his K-BBQ Burger. The sandwich starts with gochujang spread on a house-made crunch bun made with panko crumbs, followed by a beef patty with melted “kimcheese” — Uchimura’s house-made processed cheese, flavored with dehydrated kimchi powder. The sandwich also features grilled pork belly, fried onions, onion sprouts, sesame salt, a sprinkle of kimchi powder and barbecue sauce.

“Korean food … is so highly developed in umami,” said Uchimura. “I wanted to capitalize on that … [so] I dehydrated [kimchi] and concentrated it and put it into cheese. It adds a pungent umami in the burger.”

The inspiration for the burger came from Uchimura’s passion for the classic American burger, and as a way to pay homage to the recently opened Plan Check location’s new neighbors on Western Avenue in Koreatown.

But the trend has spread well beyond the City of Angels.

In Washington, D.C., chef and restaurateur Richard Sandoval is exploring Korean flavors at Zengo, his Asian-Latin restaurant. Each month, Sandoval and his culinary team research and develop the food and spirits of one Latin and one Asian country and then feature several fusion dishes as part of its Test Kitchen menu. The newest such menu, launched in January and available through March, explores the intersection of Korean and Mexican fare. Highlights include kimchi and tofu soup with pozole, cabbage, guajillo broth and tortilla strips, and spicy Korean style Rhode Island squid with rice cakes, dried shiitake mushrooms, scallions, gochujang and sesame.

"The idea came about as a way to make a kimchi, but using traditional Southern flavorings,” Hanczor said. “We decided to reduce [our country ham] stock down to a very small quantity to concentrate the flavor and were left with a salty, smoky, funky liquid that could take the place of fish sauce/dried fish in the brine. We incorporated that liquid into our kimchi brine to add the depth of flavor you usually get from those other ingredients."

Gochujang, with its blend of sweet, spicy and umami, is one of chef Kevin Korman’s favorite ingredients. He uses it for many different dishes at Caliza, a surf and turf restaurant in Panama City Beach, Fla. In the fall, he used it with his Prince Edward Island mussels. To make a sauce that was less brothy and more glazed than typical mussel sauces, Korman steamed the mussels with chiles, roasted garlic, gochujang, and a small amount of wine, then reduced the cooking liquid and finished it with butter. He served it with pickled carrots, cucumber and cilantro. Korman plans to use gochujang again on his spring menu, perhaps as part of a red curry sauce for a snapper dish.

“I have a love of taking flavors from other cultures and trying to work them into my dishes,” Korman said. “There is something so great about introducing a guest to a flavor they might have not been familiar with before simply by utilizing it in a dish that they are familiar with.”