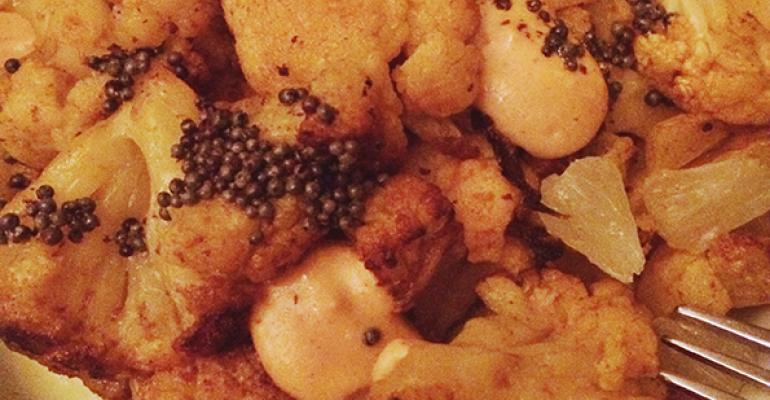 Unlike its fast-growing ethnic cuisine counterparts, Indian fare has yet to make serious inroads on American menus. Lately, however, more chefs are experimenting with the cooking techniques, spices and flavors of this complex cuisine.

“There are no geographic borders today when creative chefs are working on menus,” said Dean Small, founder and managing partner of Synergy Restaurant Consultants. “You’re starting to see [Indian] in a lot of restaurants in different ways. I think it’s going to grow.”

At Ardeo + Bardeo in Washington, D.C., chef Jonathan Dearden recently added an Indian dish to his menu for the first time. Vadouvan roasted snapper is made with snapper that is seasoned and marinated in an Indian curry blend with the addition of garlic and shallots cooked in a hot buttered pan and served with lollipop kale succotash, crispy calamari and aprium (a cross between an apricot and a plum) purée.

“I think it’s important that we give guests something different to taste, to talk about,” Dearden said. “I’m a firm believer of opening up the doors to food in other cultures.”

Dearden has spent time cooking in both the Caribbean and Florida, and said the dish brings those two worlds together. Introduced last spring, the snapper-meets-curry mashup has been a big hit with Washingtonians, and is now the restaurant’s most popular entrée.

In August, chef Andrew Zimmerman added an Indian-inspired cauliflower side dish to the menu at Sepia in Chicago. Zimmerman prepares the dish by applying the Indian cooking technique of tempering to black mustard seeds in hot oil, then frying the cruciferous vegetable in the flavored oil and topping it with a spicy aïoli.

At Found Kitchen in Evanston, Ill., a recent trip to India inspired chef Nicole Pederson to add to her menu dishes such as Harissa Roasted Sweet Corn with okra and sweet peppers; Miso Roasted Baby Carrots with chutney powder and cilantro; and Fried Cauliflower with snap peas, manzana peppers and yogurt.

Independent chefs are not the only ones influenced by Indian flavors. A number of chefs at major chains are also exploring the unique flavors of the South Asian country.

On Aug. 31, Cincinnati-based Buffalo Wings & Rings introduced a limited-time offer of an Indian-influenced flavor of wings for the first time. Wings of Fury are made with traditional chicken wings tossed in curry powder dry rub and then crisply fried, topped with Sriracha sauce and served with a scallion cream for dipping.

“We are always looking for bold flavors that are different. With that in mind, curry has been around for a while, and there are a lot of variations, but we wanted to give it our own spin,” said Elliot Jablonsky, Buffalo Wings & Rings research and development chef. “I tried curry back in 2009 and no one bit at the time. All of a sudden this is really taking off.”

Beef ‘O’ Brady’s, a Tampa, Fla.-based chain of family sports restaurants, is currently exploring Indian sauces, such as tikka masala and korma, to use with various proteins and wings.

Given that the flavors are unfamiliar to many diners, the chain is heavily testing the sauces through focus groups, peddling in-store samples with flights of sauces for dipping, and offering blackboard specials. The chain plans to officially roll out the new sauces in the fourth quarter of this year on small plates, starters and chicken tenders, and is confident that customers will enjoy them.

“There are so many Indian restaurants in major cities across the U.S.,” Groll said. “It’s time for it to emerge, time for it to come of age in the United States.”