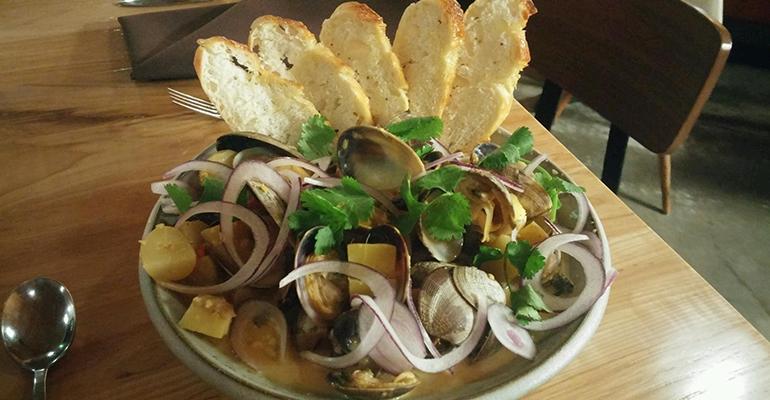 The flavorful dish starts to simmer in the U.S.

Curry, the flavorful dish of spiced vegetables and meat that has long been cooked in many countries and cultures, is finally starting to simmer in the U.S., as more chefs captivated by the bold flavors of Thai and Indian cuisine add it to their menus.

According to the latest research from Datassential MenuTrends, 19 percent of all U.S. restaurant menus feature curry, an increase of 1 percent over the last four years. Curry now appears on 33.8 percent of “ethnic” menus and on 7.7 percent of non-ethnic menus.

“I have a great love for Southeast Asian cuisine,” said Todd Mitgang, executive chef of Crave Fishbar in New York City. “If I had to think of one of my favorite comfort meals, it would be a warm bowl of Thai curry.”

“Vong [Jean-Georges Vongerichten’s Thai fusion restaurant] had just closed, and she was telling me how good their lobster with curry was. She told me how she still craved it,” Mitgang recalled. “I had never tasted Vong’s version, but having opened Kittichai [a Thai restaurant in New York’s SoHo neighborhood], I was well versed with Thai curries. I remember thanking her for the idea and told her I would attempt a version.”

On the menu since Crave’s opening day, Mitgang says of the dish: “Not all of our items stand the test of time, but this is definitely one of our bestsellers.”

“We are an eclectic restaurant and love to involve big, bold flavors, and the aromatic curry is a perfect vehicle,” Hegsted said.

He said he usually has some sort of clam preparation on the menu, but this one, and a green curry version, are the restaurant’s most popular.

Thai curry mingles with Southern staples in the curry chicken thighs at The Loyalist in Chicago. Chef de cuisine Mark Bolton, who hails from the South and loves curry, is cooking up an intense green curry sauce made with a paste including shallots, onion, galangal root, parsley and Thai basil, and chopped collard greens steeped in chicken stock and coconut milk and cooked down, then topped with a generous amount of kaffir lime leaves and more parsley and Thai basil. Bolton lays down creamy grits, then the curry sauce, then tops it all with slow cooked, crispy fried chicken thighs. When plating an order, he also adds a dash of fish sauce, lime juice and housemade hot sauce to “brighten it up."

“It’s something familiar, adding something interesting, [and] a burst of flavor,” Bolton said.

Added to the menu two months ago, the dish is now the restaurant’s No. 2 seller.

Driven by a love of curry and a lack of local places to get it, as well as a need for a vegetarian dish on his menu, executive chef Wyatt Lash created a tikka masala dish for the menu at The Commoner, a gastropub with a British bent located in Pittsburgh. Lash’s version of the classic chicken dish in a spicy orange-colored sauce combines sweet potatoes, tomatoes, chiles, winter vegetables, yogurt, cilantro and dry spices, including curry powder.

Curry is also making an appearance on menus at a number of restaurant chains, including 16-unit Phoenix-based True Food Kitchen, which in July revamped its spicy panang curry recipe, made with garlic, lemon grass, ginger, coconut water, lime juice, honey and warm spices such as cumin, among others. The dish is made with coconut shrimp broth, organic russet potatoes, onions, green beans, bok choy and heirloom carrots, topped with fresh Thai basil, and served with quinoa rice (a blend of brown rice and quinoa) on the side.