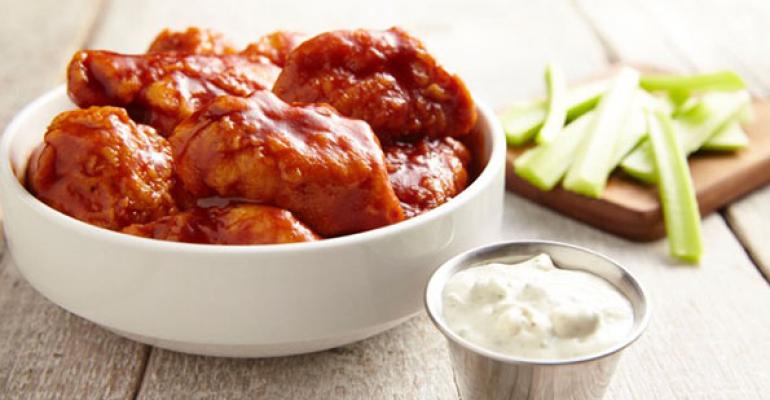 Flavor popular in Midwest, South taking hold in other regions

When chef Robert Tobin first added his new chicken wings to the menu at Tamo Bistro & Bar in the Seaport Boston Hotel last July, he would make a big batch and then freeze them.

“I can’t freeze them anymore,” Tobin said. “They go too fast.”

Drawing diners to order between 40 pounds and 60 pounds of chicken wings each week is Tobin’s bourbon barbecue glaze. His smoky, slightly spicy, reduced marinade is made with garlic and various spices, Sriracha sauce, maple syrup and the hotel’s custom blend of Angel’s Envy bourbon. After dry rubbing the wings and then grilling them, Tobin applies the glaze and then puts the wings back on the grill for a good charring.

Tobin is one of a growing number of chefs delighting diners by adding bourbon-flavored barbecue sauce to their menus.

Inspired by the popularity of brown liquors at the bar, Boston’s Restaurant & Sports Bar, which has 28 locations across the country, also recently added a bourbon barbecue chicken wing flavor to its menu.

Boston’s wings are fried and then tossed in the bourbon barbecue sauce, which is made with a blend of Maker’s Mark bourbon and Sweet Baby Ray’s BBQ sauce. Tim Matousek, Boston’s vice president of operations, says the flavor has been a “fan favorite” since it was rolled out during the March Madness college basketball tournament.

Buffalo Wings & Rings, a 60-unit chain based in Cincinnati, is currently testing a bourbon barbecue sauce for its chicken wings in select locations. The wings are fried and then tossed in a tomato-based barbecue sauce made with molasses, brown sugar, peppers, onion, spices such as tamarind, and bourbon.

“[The flavor] starts with heat, then sweet, then finishes with smoke,” said Elliot Jablonsky, executive chef of Buffalo Wings & Rings. “Bourbon definitely brings the smoke and kind of a wood flavor, like oak does to wine, in a good way.”

While Jablonsky says the combination of bourbon and barbecue “makes perfect sense,” he also credits the dish’s appeal to a newness factor.

“When you’ve been doing wings for years, it’s not that often that you can give people something a little more current,” he said.

But wings aren’t the only things getting a touch of this smoky on-trend flavor.

At Smokey Bones Bar & Fire Grill, which currently has 65 locations in 16 states, executive chef Jason Gronlund recently created a white barbecue sauce made with Jim Beam Jacob’s Ghost, a white whiskey, which will be featured on the chain’s KC White Lightning Burger this summer. The specialty sauce-topped burger will be available for a limited time, from June 1 through July 26. In addition, the chain has offered the Grilled Bourbon BBQ Chicken Breast for some time.

“This dish includes many of my favorite ingredients, one of them being bourbon,” Ferraro said. “I incorporate bourbon into the custard of the French toast along with the barbecue sauce for the pulled pork to add complexity. The toasted barrel flavors complement the sweetness of the barbecue sauce and the rich creaminess of the French toast and hollandaise.”

Ferraro says the bourbon-spiked dish is among the restaurant’s more popular brunch items, selling about 20 orders per brunch service.