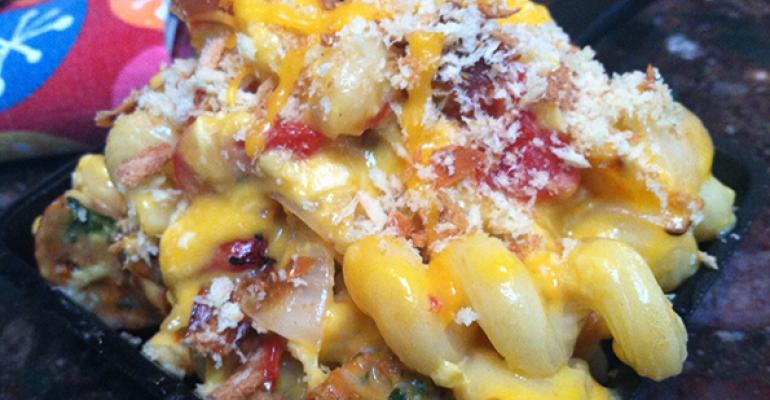 <p>Cinnamon is a key ingredient in a special roasted chicken and autumn vegetable topped mac and cheese to be offered this fall at Sweet Lorraine&rsquo;s Fabulous Mac n&rsquo; Cheez!</p>
What's Hot

With the arrival of September, diners have long come to expect an array of seasonal drinks and sweets featuring autumn spices, such as cinnamon, pumpkin and nutmeg. In recent years, these spices have increasingly migrated to the main menu, getting more play in savory appetizers and entrées.

“The first time I added cinnamon to an entrée guests said it tasted sweet,” Platman said. “I told them, ‘It’s your imagination. Cinnamon is savory.’”

Platman’s latest use of cinnamon in savory dishes is on the menu at Sweet Lorraine’s Fabulous Mac n’ Cheez!, her Detroit-based fast-casual chain of five units.

“Autumn spices give the dish an elegant, unique approach and help balance the dish,” Nashan said. “These spices work especially well in meat dishes. It’s a fun touch and plays with people’s palate.”

Come September, Francis Derby, executive chef of Cannibal in New York City, will swap out the ramps and rhubarb preparation of his house-made blood sausage for a fall version made with clove, cinnamon, anise, fennel seed and black pepper served with a salad of spaghetti squash, hazelnut and charred leek.

“Classic boudin noir often calls for these spices,” Derby said. “[It] brings a different dimension to the sausage … makes the flavor of blood sausage approachable in a way.”

Pumpkin is often in play on the fall menu at Amis in Philadelphia. Previously on the menu and likely to return again this fall is Roasted Pumpkin with Mascarpone, a small dish made with roasted pumpkin chunks, brown butter and sage leaves served on a plate spread with mascarpone cheese.