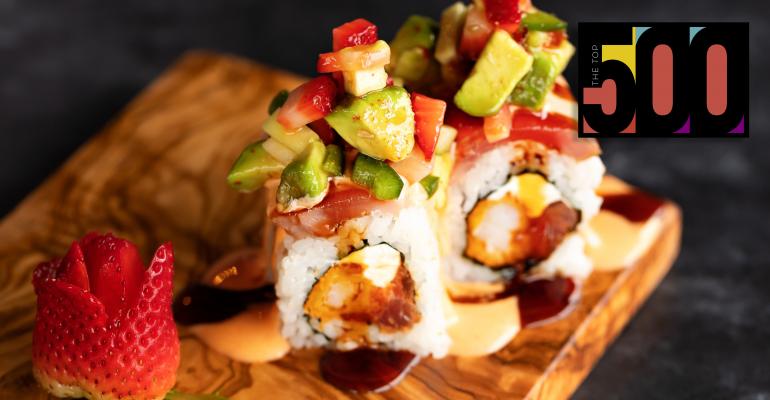 At Rock n Roll Sushi, customers can get traditional sushi rolls or even sashimi or nigiri, but they can also have crawfish rolls or sushi rolls that are baked or fried.
Data & Research>Top 500 Restaurants

Rock N’ Roll Sushi rocks on thanks to dedicated franchisees

The casual-dining chain, with a new owner and CEO, saw both unit and sales growth in 2020

Rock n Roll Sushi is a casual-dining chain serving sushi and hibachi-grilled food to people who might not otherwise eat it. The brand was founded in Mobile, Ala., in 2010 by husband-and-wife team Lance and Gerry Mach Hallmark, who sought to take the perceived pretense out of sushi and make it fun.

Customers can get traditional sushi rolls or even sashimi or nigiri, but they can also have crawfish rolls or sushi rolls that are baked or fried. There’s fried rice and hibachi grilled chicken and lobster, all served in a rock-themed setting with music videos playing on screens.

The concept has taken off throughout the Southeast and Texas, and it got a new owner and a new CEO during the pandemic. It added five new restaurants in 2020, closing out the year with 44 locations. It now has 48 units, with potentially 15 more opening by the end of the year.

Chris Kramolis, a former area developer for Tropical Smoothie Cafe and now Rock n Roll Sushi’s CEO — as well as an owner of three locations himself — said the chain benefitted from committed franchisees. Many of them had been brought in by the founders, who were quickly able to adjust to the “new service needs that the pandemic created.”

That included bringing in better packaging, developing family-sized meals and accepting the hit to the bottom line that comes with embracing third-party delivery.

“We believe a lot of that was [because] some of our competition didn't make the pivot as quickly as our franchise system did,” Kramolis said. That included the big hibachi restaurants that also sold sushi, many of whom closed altogether, as well as mom-and-pop restaurants that didn’t have the delivery infrastructure that Rock n Roll Sushi does.

Kramolis himself opened his first unit, in Little Rock, Ark., at the end of May — the lease had been signed and construction was underway before the pandemic hit — and he opened his second location in late July. He now has a third one in Tallahassee, Fla, with a new location underway in each of those cities.

He was drawn to the chain because it was successfully selling sushi in Alabama.

“I was like, ‘Well, wait a minute. These guys are doing this in Alabama. Why don’t I test it in Arkansas?’ They’re very similar, it’s just that one has a really, really good football team. … And it works.”

BOLD ended up buying out the founders of Rock N’ Roll Sushi, who are themselves now franchisees in the Nashville area, and Jenrich appointed Kramolis CEO.

“Delivery customers cost more money … especially with the commissions that you're paying to the third-party delivery,” he said.

Being part of a three-brand group helped him to negotiate better rates with the delivery services, “and then we have to add a little bit of juice on there when we sell to the customer,” he said.

But customers accepted that they had to pay extra to get their food delivered. “There's been zero pushback on the prices being more on delivery than in-store,” he said.