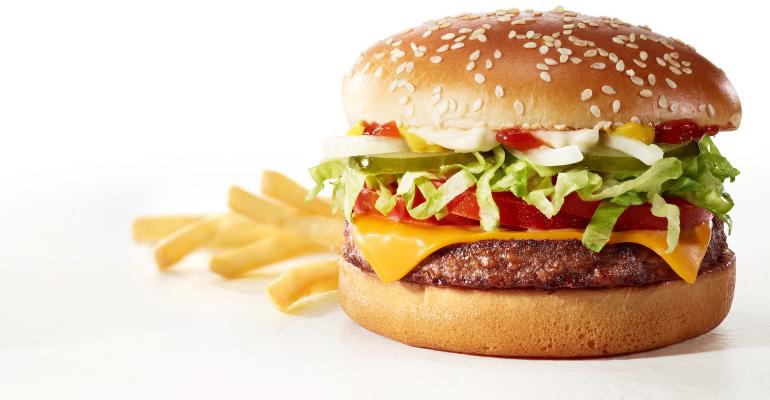 The new McPlant will be available starting Feb. 14 at 600 restaurants in the San Francisco Bay Area and Dallas-Fort Worth, expanding an an eight-unit test begun last November.
Data & Research>Top 500 Restaurants

McDonald’s to expand McPlant to about 600 U.S. stores in February

McDonald’s Corp. on Feb. 14 will expand its eight-unit U.S. test of its plant-based McPlant burger to about 600 restaurants in the San Francisco Bay Area and Dallas Fort Worth, the company announced Thursday.

The Chicago-based burger giant, which has been piloting the McPlant domestically in eight restaurants since early November, said its McDonald’s USA LLC division would offer the new plant-based patty, developed with Beyond Meat Inc., for a limited time while supplies last.

The company said the test was being expanded “to help us understand customer demand” and “its impact to restaurant operations.”

McDonald’s first unveiled the McPlant abroad in 2020, and it has since been introduced in such countries as Austria, Denmark, the Netherlands, Sweden and the United Kingdom.

McDonald’s did advise customers that the plant-based burger in the U.S. contains non-plant-based ingredients such as American cheese and mayonnaise. It is served on a sesame-seed bun.

“It’s also cooked on the same grill as meat-based products and eggs,” the company said. “As always, guests can customize and request to hold the cheese and mayonnaise, or any other ingredients.”

Stock analysts had been watching progress of the U.S. test.

BTIG restaurant analyst Peter Saleh wrote a note in December that said, “following several channel checks over the past couple of weeks, we believe the McPlant product with Beyond Meat is performing well at the handful of restaurants offering it, warranting a more expansive market test in early 2022.”

McDonald’s on Nov. 3 began testing the McPlant burger in eight U.S. restaurants. The U.S. test has been in: the California cities of El Segundo and Manhattan Beach; Cedar Falls, Iowa; the Louisiana communities of Jennings and Lake Charles; and the Texas cities of Irving and Carrollton.

“Based on our franchisee checks, we believe several locations are selling as many as 500 McPlant sandwiches per week, or about 70 per day,” Saleh noted.

“We expect Beyond Meat and McDonald’s to support the broader test with local/regional advertising, likely boosting the sales volumes north of 70 units/day,” Salah said. “That said, test market and launch volumes are always higher than what can be achieved at a steady state over time, and we expect these sales volumes to moderate considerably over time.”

McDonald’s USA has about 14,000 restaurants.