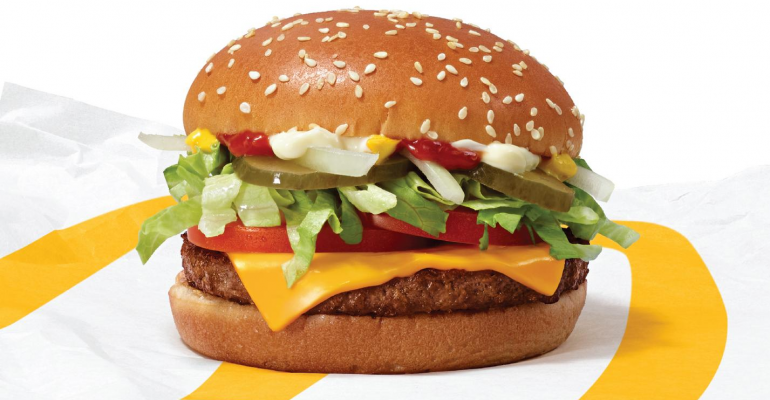 McDonald’s Corp. is seeing “very healthy” sales of its plant-based McPlant burger in an eight-unit test that began in November, and one restaurant analyst expects that to expand to as many as 700 in a limited-time offer early next year.

Chicago-based McDonald’s on Nov. 3 began testing the McPlant burger in eight U.S. restaurants after deploying it in some markets abroad. The U.S. test has been in: the California cities of El Segundo and Manhattan Beach; Cedar Falls, Iowa; the Louisiana communities of Jennings and Lake Charles; and the Texas cities of Irving and Carrollton.

Related: Mariah Carey takes the holidays up an octave with 12 days of McDonald’s deals

BTIG restaurant analyst Peter Saleh said that “following several channel checks over the past couple of weeks, we believe the McPlant product with Beyond Meat is performing well at the handful of restaurants offering it, warranting a more expansive market test in early 2022.”

Saleh, in a note Monday to investors, said: “Our conversations indicate McDonald's plans to expand the test from eight locations currently to approximately 700 restaurants in several markets through a six-eight week limited-time offer in February/March.”

Saleh, BTIG’s managing director for restaurants, said his contacts suggested a systemwide rollout wasn’t likely until 2023, given marketing calendars and the scale of the McDonald’s system. The company has about 14,000 restaurants in the United States.

Saleh said the McPlant performed well despite a lack of advertising support. However, the larger first-quarter 2022 market test would be “supported by local and regional advertising, funded by McDonald's, franchisees, and potentially even Beyond Meat,” Saleh wrote.

Fall’s eight-unit test was small, he said, but “we believe initial sales of the McPlant offering are very healthy.

“Based on our franchisee checks, we believe several locations are selling as many as 500 McPlant sandwiches per week, or about 70 per day,” Saleh noted. “We expect Beyond Meat and McDonald’s to support the broader test with local/regional advertising, likely boosting the sales volumes north of 70 units/day. That said, test market and launch volumes are always higher than what can be achieved at a steady state over time, and we expect these sales volumes to moderate considerably over time.”

McDonald’s said the McPlant is priced to be on par with McDonald’s classic burgers like the Big Mac and Quarter Pounder, but the prices vary by region.

The McPlant employs a plant-based patty developed with Beyond Meat Inc., and it is exclusive to McDonald’s. Ingredients include peas, rice and potatoes. The patty is served on a sesame seed bun with tomato, lettuce, pickles, onions, mayonnaise, ketchup, mustard and a slice of American cheese.

The company did note that the patty is cooked on the same grill as meat-based products and eggs.

“The McPlant has also been introduced in various markets overseas this year, including Sweden, Denmark, the Netherlands, Austria and most recently the U.K.,” the company said in a press release.

Competitor Burger King, owned by Toronto-based Restaurant Brands International, has offered the vegan Impossible Whopper since 2019. Carl’s Jr., a division of Franklin, Tenn.-based CKE Restaurants Inc., rolled out a Beyond Meat burger to about 1,100 units in late 2018.