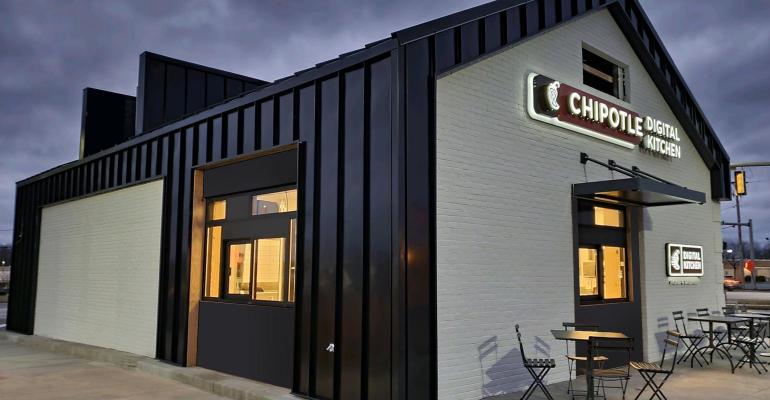 Chipotle Mexican Grill
The Digital Kitchen format that debuted in late 2020 has features that will be applied to traditional restaurants.
Data & Research>Top 500 Restaurants

It’s all about meeting guests where they are, said Digital Strategy VP Nicole West

Chipotle Mexican Grill has a guiding strategy when it comes to digital sales: Meeting customers where they are.

And with a $3 billion digital business, that strategy appears to be working. Chipotle Mexican Grill is the chain to watch when it comes to engaging with guests in ways outside of walking into a restaurant to order and pay.

In a CREATE Digital Dive session last week titled “Driving Sales through Omnichannel Engagement,” Nicole West, Chipotle’s vice president of digital strategy outlined some of the tactics the Newport Beach, Calif.-based chain has used to build its digital business, offering some hints of what’s to come.

“We’ve built this digital system to enable customers to access Chipotle in ways that make sense for them,” she said. “That can mean the customers that use the speed and convenience features, like saved favorites or rapid reorder, that we have on our mobile app, or pickup times that are as fast as 10 minutes out and delivery to you within an hour. And most demographics across the country are engaging with gamification, which is a newer feature within our app and web experience.”

About 40% of Chipotle’s sales come from the digital side, even as in-restaurant sales are growing post-pandemic. The vast majority of Chipotle customers use mobile app or mobile web to order and pay, West said, but Chipotle continues to experiment with other channels, including voice — with the automated concierge bot named Pepper handling those calls — and iMessage, for example.

Earlier this year, Chipotle created a limited-time game on Roblox that allowed guests to virtually build a burrito to earn a coupon for free food in real life. The game had 4 million plays — and was hailed as a move into the metaverse or Web3 — though guests couldn’t place an order there.

West said she was inundated with calls from friends who wanted to franchise a Chipotle in the metaverse, she said. But what the metaverse is (or will be) has yet to fully take shape.

“We see great opportunity in this space,” she said. “Exactly how we will continue to participate and show up is to be determined.”

Chipotle’s Rewards program, which as of the first quarter had 28 million members, has also been a “key enabler of the digital flywheel” at Chipotle, she said.

In March, the chain celebrated the Rewards program’s three-year anniversary with a “Guac Mode” offer of free guacamole. The chain also gave away $100,000 in cash drops on Twitter in a partnership with Cash App, a promotion that drove a 35% increase in enrollment week-over-week, she said.

Currently, Chipotle is looking at personalizing engagement with Rewards members, tailoring messages to their specific preferences. A vegan would not get messages promoting meat items, for example. And the chain is looking at expanding that personalization to the wider digital customer base, West said.

Chipotle’s digital sales growth has also been supported by operational shifts. The chain has been growing its Chipotlane drive-thru access, for example, which serve digital orders only. Now in about 400 restaurants, Chipotlanes will be in 80% of the up to 250 new restaurants to be added this year.

In 2020, the chain also debuted its first Digital Kitchen unit, which has no in-restaurant ordering. West said features from those locations — like the minimal or non-existent seating areas — will increasingly be applied to traditional Chipotle locations where appropriate.

Speeding throughput is also a goal to help grow digital sales, and West said automation in the kitchen has been a focus. Chipotle is about to start testing a new automated tortilla chip fryer named Chippy, and the company will also look at using a similar robotic arm as a tool to prepare avocados for the fresh guacamole — both tasks that human workers don’t love.

Fundamentally, Chipotle is looking at consumer behavior and ways the chain can remove points of friction, she said.

“We don’t add technology for the sake of bells and whistles,” she said. “We look for ways to add value to our customers’ lives.”

To hear more, West’s session can be watched on-demand at CREATE.nrn.com.