Casual-dining restaurants with distinct brands and experiential offerings have been able to avoid many of the challenges facing the rest of their category.

No restaurant represents this trend like Cooper’s Hawk Winery & Restaurants, the fastest-growing of the 62 Casual-Dining restaurant chains in the Top 200 on all fronts — sales, units and estimated sales per unit.

But if you ask founder and CEO Tim McEnery, left, he’ll tell you Cooper’s Hawk isn’t necessarily even a restaurant.

Certainly, consumers go to Cooper’s Hawk for dinner, but the company prides itself on offering a variety of reasons and occasions to visit — stopping in to pick up the wine of the month, trying out a new release at the restaurant’s tasting room, attending a special event on or off-site.

“It’s not just dining,” said McEnery. “It’s not just going to have a drink at a bar; it’s very social; it’s very interactive, and people have really seemed to cling on to it. If you look at our P&L, it’s a heavy-duty restaurant operation, for sure. We also sell millions of dollars of wine and merchandise out the front door as well. I think it absolutely is a lifestyle brand. It’s everything.”

When McEnery opened his first location in 2005 in Orland Park, Ill. there was an explosion of brewery restaurants, said Alan J. Liddle, NRN senior data and event content director. McEnery smartly incorporated the wine into the trend.

“I think wine drinkers tend to be little bit more loyal to their brand than beer drinkers, so by working with that group you might have a built-in advantage to marketing and loyalty programs,” he said. “Once you find a great label that you like, or you find the brand you like and trust or you find a curator you trust, you’re loyal.”

Cooper’s Hawk has nearly 300,000 wine club members, and almost 100 percent of them come to their local restaurant in person every month to pick up the wines of the month.

But most members aren’t coming in just for those bottles. Sixty-five percent make an ancillary purchase, said McEnery. Sometimes it’s a drink at the bar, sometimes it’s dinner, but McEnery has solved one of the most significant problems facing all restaurants — getting customers in the door.

And it’s those regular customers, who McEnery says spend about $30 a visit on average, have helped Cooper’s Hawk growth jump by over 30 percent in the latest year to $241.8 million, according to our Top 200 report.

The company has over 30 locations, including restaurants in Cincinnati, Ohio and Naples Fla. And, its unit growth is exploding. In the Latest Year, unit count grew by 20 percent, following Preceding Year growth of 25 percent.

Estimated sales per unit is about $8.8 million. 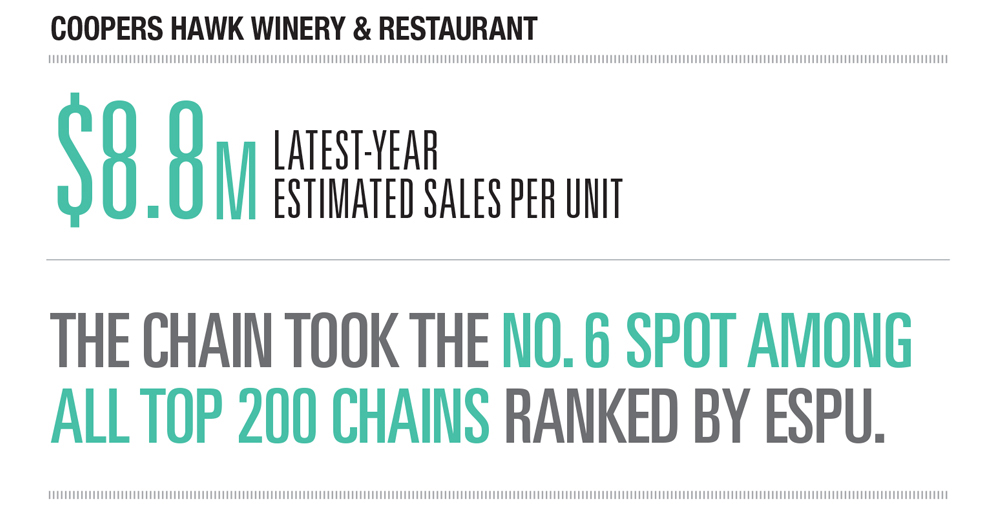 Cooper’s Hawk restaurants are mostly located in smaller cities and commuter neighborhoods outside of major metro areas. In order to open new locations at a steady clip, McEnery uses what he calls a “cluster strategy along with limiting new market risk” to ensure success.

“So, if we’re going to open up five restaurants in a year, one of those restaurants can be in a pioneering market or a market that we haven’t done something with before, and the other four would go into markets where we’ve already had locations, and we’re 99% sure they’re going to be successful,” McEnery said.

Wine club members have the specific location they head to each month for pickup, but some sites are close enough for diners to visit multiple restaurants.

As Liddle sees it, “If they’re growing fast it suggests that they’re being successful in their site location because a couple of dogs will slow you down real fast.” And “they don’t seem worried about cannibalization.” 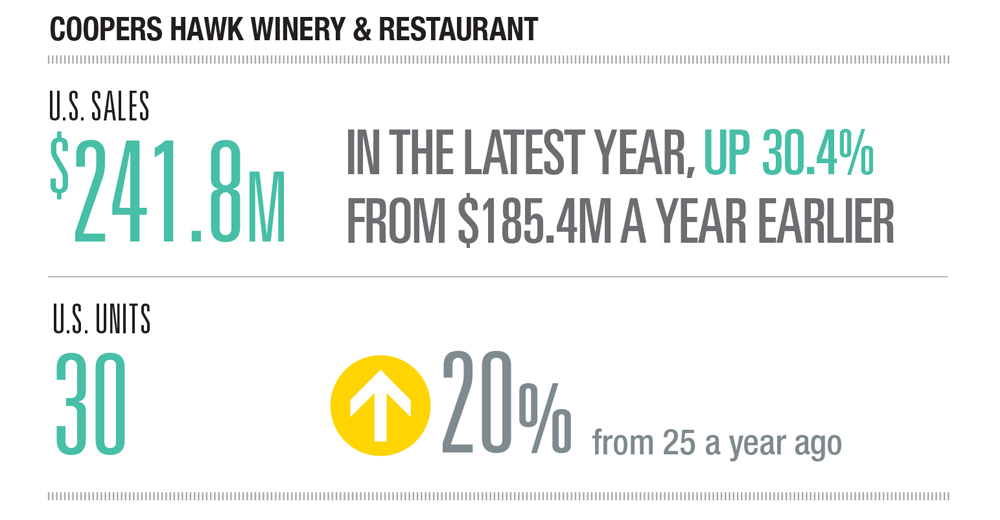 What McEnery does worry about is density.

“When you go to Cooper’s Hawk there’s people of all walks of life that,” he said. “There really is something for everyone.”