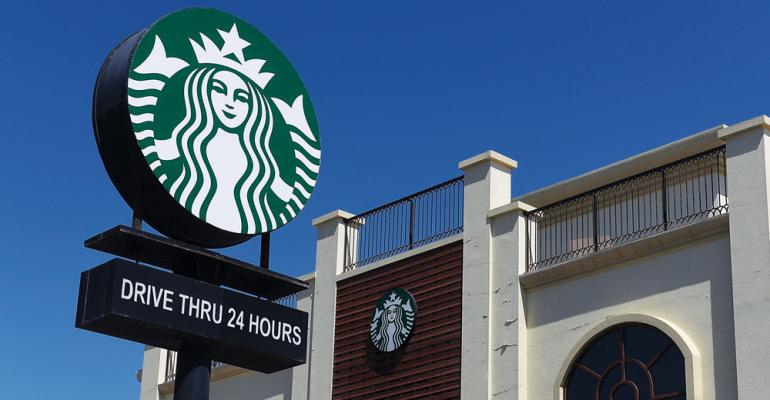 Half of 12 restaurant categories see gains in Latest Year

Segments posting the biggest share gains this year in the Top 100 were Beverage-Snack and Chicken.

Six of the 12 categories booked market share growth, based on the segments’ aggregate sales as a percentage of all the Top 100 sales in the Latest Year. Besides Beverage-Snack and Chicken, gainers included Pizza, Convenience Store, Bakery-Café and LSR/Specialty.

Seattle-based Starbucks Coffee, with 13,172 domestic units at the end of 2016, has been working on food offerings to complement signature beverages, especially in the breakfast daypart. These initiatives led the category to increase to 11.1 percent of Top 100 sales in the Latest Year, up from 10.5 percent in the Preceding Year.

“We have demonstrated that by focusing on a specific daypart, we can create new customer occasions that add to the branded experience and become long-term drivers of growth,” Kevin Johnson, Starbucks CEO, said in an April analyst call.

On April 11, the company launched upgraded lunch offerings with a Mercato menu at more than 100 locations in Chicago. The company said more than half its customers patronize after 11 a.m., and the menu of grab-and-go salads, sandwiches and sides was aimed at those patrons. This effort, Johnson said, was focused to “unlock growth in all dayparts.” With the Chicago launch, Starbucks said it had grown its food business by 1.5 times since 2013 and set the goal of doubling it by 2021.

Another wave of Starbucks technology, layered on the mobile order and pay app, will be deployed to the company’s highest volume locations this quarter.

Such innovations allowed Starbucks to increasingly nibble at market share against category competitors like Dunkin’ Donuts and Krispy Kreme Doughnuts.

The Chicken segment also increased its market share in the Latest Year, with the category growing to 8.5 percent of Top 100 sales from 8 percent in the Preceding Year.

About half the brands gained market share in the Latest Year, led by Chick-fil-A, which increased its lead to 36.0 percent of the category from 33.9 percent in Preceding Year.

The Bakery-Café category also nudged upward in the Latest Year’s market share, led by gains for both Panera Bread and Tim Horton’s.

Panera continued in the Latest Year to invest in its “clean” menu positioning and to adding technology to restaurants as part of its Panera 2.0 initiative.

Market share losses in the Latest Year were spread across the half dozen categories, with the most dramatic haircut in Casual Dining, which saw its share trimmed to 15.2 percent from 15.7 percent in the Preceding Year.

The Casual-Dining category was almost evenly split among those losing market share and those gaining. The traditional grill-and-bar players generally lost ground to the entertainment-focused concepts like Dave & Busters, which saw a 15.8 percent change in U.S. Systemwide Sales in the Latest Year.