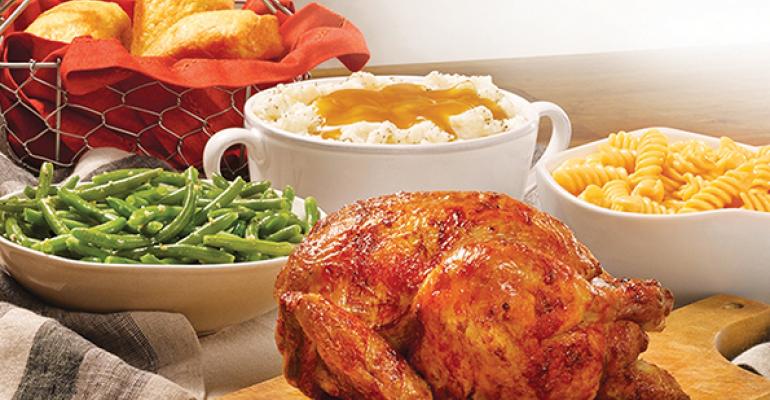 It was a good year for Chicken chains, with sales rising on average nearly 8.8 percent. Although Boston Market and Church’s Chicken saw declines, the other eight chicken chains in the Top 100 enjoyed robust growth.

Raising Cane’s Chicken Fingers again led the pack in terms of growth. The chain’s limited menu of chicken fingers, Texas toast, fries, coleslaw and dipping sauce has shown that not doing very much, but doing it very well, can be the key to success.

The Baton Rouge, La.-based chain posted growth in estimated sales just shy of 26 percent — the fastest growth among all Top 100 chains — with 59 net new units by the end of 2016, for a 23.5-percent increase in total units.

Hannah also noted that the chain made some important innovations in 2016. Those included the new Chick-fil-A One app that allows customers to order ahead of time, bypass the line and earn treats.

The chain also replaced coleslaw with a Superfood Side — a blend of broccolini, kale, maple vinaigrette, dried sour cherries and roasted nuts. It introduced healthful options such as a Spicy Southwest Salad and an Egg White Grill — grilled chicken breast, egg whites and American cheese on an English muffin. For more indulgent occasions, the chain riffed on Frosted Lemonade, which blends lemonade with soft serve, with Frosted Coffee. Although Chick-fil-A grew the most in dollar terms, from a percentage perspective it was outstripped by Raising Cane’s and Wingstop, the latter of which saw 16.9-percent sales growth. Dallas-based Wingstop also opened a net 136 locations, for a 17.3-percent in total restaurant count.

KFC continued a turnaround and grew sales by 3.6 percent in the Latest Year, compared with 1.9 percent the Preceding Year, even as it closed a net 2.4 percent of domestic restaurants, decreasing the chain’s U.S. unit count by 103 units, to 4,167 locations.

The subsidiary of Louisville, Ky.-based Yum! Brands Inc. has been undergoing what management calls a “recolonelization,” or a return to the high standards of founder Colonel Harland Sanders and bringing the iconic colonel back to the forefront in a series of marketing campaigns featuring entertainers from George Hamilton to Rob Riggle portraying different versions of the founder.

KFC U.S. president Kevin Hochman said “recolonelization” has entailed more than 100,000 hours of training. Managers attended training rallies across the country and were sent back to retrain staff and recalibrate equipment. The effort was supported by a 13-week advertising campaign.

Yum also spent $80 million on equipment for integrated prep lines that has improved efficiency and paved the way for the launch this year of the Zinger, a fried chicken sandwich that has been popular in international markets.

The chain remodeled around 250 locations by the end of 2016, resulting in mid-single-digit to high-single-digit improvements in customer scores in the categories of appearance, cleanliness, taste and speed.

Correction: July 6, 2017 This story has been updated to correct Wingstop's headquarters. It is Dallas.