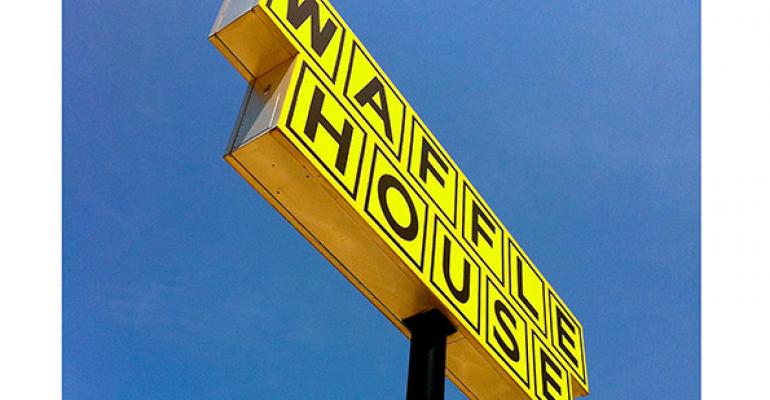 Waffle House Inc. has teamed up with a new crowdsourced delivery app to drive traffic to — and packages from — its 1,750 restaurants.

The Norcross, Ga.-based family-dining operator partnered with Atlanta-based Roadie Inc. to connect people with items to send with drivers who are heading in the right direction, creating an Uber-style system with services similar to FedEx, UPS or the U.S. Postal Service.

“Think of it as carpooling for cargo,” Roadie says on its website.

"For the last 60 years, Waffle House has been a place for travelers and a preferred meeting place for our customers," Walt Ehmer, CEO of Waffle House, said in a statement. "Roadie combines the two, making it easy for senders and drivers who love waffles to meet at the nearest Waffle House.”

"Waffle House provides a friendly, comfortable place for our folks to meet — and grab a plate of ‘scattered, smothered and covered’ while they're at it,” said Marc Gorlin, founder and CEO of Roadie.

Waffle House has restaurants in 25 states.

“Roadies” receive a free waffle upon downloading the app and a free beverage when they're on a delivery, or what the app calls a “gig.” The app’s fees range from $8 to $150, and drivers get a percentage of that amount to deliver goods to destinations they are heading to.

Waffle House is promoting the Roadie app with in-store signage and through social media and email promotions to its Regulars Club members. In turn, Roadie offers app users a variety of Waffle House special offers through the free mobile app, which is available for download in the iTunes Store and on Google Play.

The Waffle House-Roadie partnership was borne out of a nighttime glow-in-the-dark golf tournament, Gorlin told Tech Crunch, and Ehmer was receptive to the idea.

Pat Warner, Waffle House’s vice president of culture, added that the Roadie deal was “a natural extension of what our restaurants are right now.”

“We’re kind of a meeting place, a gathering place for people in the community now,” Warner told Tech Crunch. “We’re along the interstate, so a lot of people use us as landmarks and meeting places already.”

The end game is that app users and senders would have a meal when they meet at a Waffle House, which the app will then promote as a place to connect.

Waffle House is among the first of many “roadhouses” that the company will work with, Gorlin said, and waffles are among the perks that Roadie will use to incentivize delivery partners.

The four-week-old platform, which had about 7,500 downloads as of last week, also gives Waffle House a toehold into the Millennial market.

"I think they're looking at driving a lot of the folks within the sort of tech-enabled Millennials and that community to their stores, driving them in there to give them a free waffle and see what else they might enjoy,” Gorlin told CNBC’s “Closing Bell.”

So far, the Roadie service has been used for short-haul deliveries of seven miles and longer shipments of 300 miles, Gorlin said. Items have included toys, mattresses, boxes of shirts and even time-sensitive medical supplies.

The service is now live for senders in 10 Southeastern states, with national expansion planned.