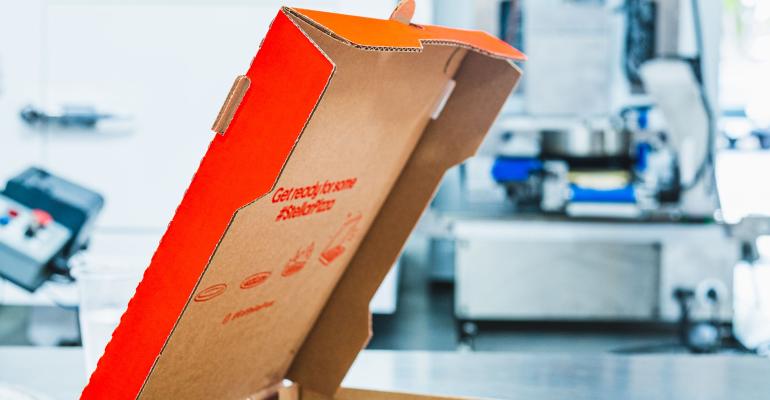 Stellar Pizza
Even though robot pizza truck company, Stellar Pizza, has not even launched yet, the SpaceX engineer-founded foodservice technology company already has $25.5 million in investments under its hood.
Operations>Technology

Tech Tracker: Pizza robots are so hot, even Jay-Z is investing in them

Jay-Z’s venture capital firm was a lead investor in a $16.5 million funding round for Stellar Pizza, Flippy the robot might have a competitor, and more tech news

We’ve been following the rise of pizza robots — both as delivery vehicles and as automated cooks in the kitchen — pretty closely, so the news that Stellar Pizza announced a $16.5 million round of funding backed by Jay-Z’s venture capital firm, Marcy Venture Partners, came as no surprise.  The automated pizza truck company just launched in Los Angeles this fall and offers a new, staffing-light way to serve pizza on wheels.

Stellar’s pizza bots are not the only AI chefs in town: Karakuri is a London-based robot from the company FRYR that can automate quick-service fried food lines. Sound familiar? Karakuri reminds us of Miso Robotics’ Flippy the robot, which has already been deployed in several major restaurant brands. Will Karakuri provide a little friendly competition?

Related: The next frontier of restaurant tech is in the kitchen

Even though robot pizza truck company, Stellar Pizza, has not even launched yet, the SpaceX engineer-founded foodservice technology company already has $25.5 million in investments under its hood.

On top of a previous $9 million fundraising investment from Root Ventures, Stellar Pizza announced on Oct. 3 a $16.5 million Series A funding round led by Jay-Z’s venture capital firm, Marcy Venture Partners. With this funding, Stellar Pizza’s founder Benson Tsai said that they will be able to make “strategic investments” ahead of the company’s imminent launch at the University of Southern California, which will soon be followed by other college campuses.

Stellar Pizza’s robot arms can pick up and press a dough ball, prepare for toppings based on whatever a customer orders, and then move the pie into the on-board pizza oven, where it will be ready in two-and-a-half minutes.

Karakuri is another fry robot on the market

Karakuri is giving Miso Robotics’ Flippy the fry cook some healthy competition with its new fry line automation technology from London-based FRYR robot company. Karakuri is available both in the U.S. and Europe at $2,100 and can cook 130 pounds of French fries in an hour.

The robot is designed to not only cook fries without human hands, but also to reduce food waste by being able to calculate how much fries are needed to match restaurant demand, and it can also save on energy and oil usage too. The product will be installed in quick-service and fast-casual restaurants globally sometime over the next few months.

“The FRYR210 is the first in a family of fry line solutions,” Barney Wragg, CEO of FRYR said in a statement. “We will be expanding the FRYR range in the future to support varying numbers of fry wells and freezers to help meet the cost and capacity demands of every restaurant.”

In other environmentally friendly news, Taco Bell franchisee Diversified Restaurant Group is going to be the first quick-service restaurant in history to have an electric vehicle charging station in the parking lot. The franchisees are partnering with ChargeNet Stations to create a comfortable place for six EV cars (and their owners) at once to fuel up “with a charge and a chalupa” starting Tues. Oct 18.

“I believe there's a lot of demand in this,” Tom Douglas, COO of Diversified Restaurant Group told Nation’s Restaurant News. “I think it will drive more traffic and offers more options for customers. […] We offer the perfect place for folks are looking for a quick 20-minute charge and be able to get something to eat too.”

Moving forward, Diversified Restaurant Group is planning to add charging stations across more of its restaurants, and Taco Bell will be adding EV charging units in up to 120 more Taco Bells across California.

Grubhub is now partnering with GoPuff

Even though we’ve previously speculated that convenience store delivery company GoPuff could give the food delivery giants a run for their money, it appears they’re now working together. Earlier this month, GoPuff announced a partnership with. Grubhub, offering its selection of c-store products — from Pampers to pet supplies — on the Grubhub marketplace in select markets in New York City, Los Angeles, Chicago, Boston, Philadelphia and Austin.

Grubhub will also be teaming up with GoPuff to offer its network of alcohol delivery partners as well as its virtual brands, including the Mean Tomato. Grubhub+ members will get free delivery on these items just as they would for their regular restaurant delivery orders.

As more tech companies keep popping up, raising funding, and acquiring other software startups, integrations are becoming more crucial. Uber just announced what it’s calling an industry-first partnership with Toast and Clover: customers of these POS systems can now sign up directly for Uber Eats through their point of sales devices. The self-signup product integration is available right now for Toast and Clover customers in the U.S. and Canada.

In other Uber news, Uber partnered with Visa to launch a grants program for restaurants that are still struggling in the aftermath of the pandemic (and might not have scored a coveted Restaurant Relief Fund). The $1 million SMB Support Program gave out 100 $10,000 grants to Uber partners in 10 U.S. cities, with preference given to veteran, minority, women, and LGBTQIA+ business owners.

DoorDash customers can add alcohol pairings to an order

While you’ve been able to order alcohol through DoorDash for a long time — a feature that was particularly popular during the height of the pandemic — now, for the first time, you’ll be able to add alcohol to a food delivery order from outside your restaurant of choice.

Drinks with DoubleDash is an extension of the groceries and alcohol delivery programs that third-party delivery companies have been adding on, and lets customers add a wine, beer or liquor pairing to their order from a nearby liquor, convenience, or grocery store—and it will all come in the same order.

It's yet another example of DoorDash trying to drive up average ticket from customers and expanding their repertoire to be more than just an app for scrolling through dinner delivery options.

Jamba’s robot kiosk gets a makeover

Jamba by Blendid robotic kiosks have been popping up in malls and non-traditional locations all over, and now the AI smoothie-making kiosk is getting a makeover. The Gestalt Brand Lab creative team is making Jamba by Blendid friendlier, more personable and upping customer engagement with a new design.

The robot now has googly eyes, and can dance and wave. Jamba hopes that the warmer personality will increase customer interaction and (hopefully) sales:

“Our goal with the Jamba by Blendid creative work was to develop a unique consumer offering only found at the robotic kiosks, drawing consumers in with a fun and Insta-worthy experience," Gestalt Brand Lab managing director Brian Munce said in a statement.