In the challenging fast-casual pizza space, differentiation is key to success for these look-a-like concepts.

For Pieology Pizzeria, one of those game-changers is drone delivery.

The Southern California-based company conducted a drone experiment in mid-September during Stamford Innovation Week in Connecticut. The build-your-own pizza chain, which has about 150 units, delivered one of its signature 11-inch pies to kick off the tech event.

The brand, founded in 2011 in Fullerton, Calif., created special clasps for the drone so it could latch on to the insulated pizza box. The clasps allowed the flying pizza to be visible as the drone carried it through the air, instead of being sealed in a compartment.

The pizza, which took off from the chain’s year-old Stamford, Conn. store, traveled six blocks in four minutes. It was greeted by a cheering crowd of 350 people.

For Pieology, the drone drop wasn’t a one-time deal. It is a serious look at the next generation of delivery in tech-forward communities, said Chad Bailey, vice president of marketing for the Rancho Santa Margarita, Calif.-based brand. 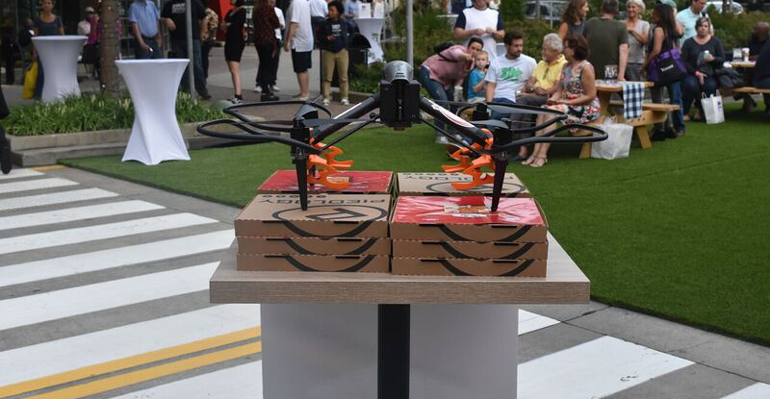 Plus, the flying box of pizza is not a bad bit of marketing. The mid-air visibility in an urban setting is certain to trigger brand chatter. Bailey wants people to say: “There goes amazing taste, Pieology Pizzeria, flying through the air.”

Of the top fast casual pizza players, Pieology is the first enter to enter the air space with food delivery. MOD Pizza and Blaze Pizza, also born in the West, have not attempted drone delivery.

That’s good news for Pieology, which is looking for a leg up in the saturated space.

The company is hoping to launch drone delivery at the Stamford store. The city is one of four in the state that recently received a $2 million grant to create innovative solutions to urban planning, development and mobility.

Pieology is also scouting other jurisdictions that have federal aviation approvals to experiment with food delivery through drones.

“We are looking to be a leader in that technology,” Bailey said. “It’s definitely something we intend to pursue.”

It’s a points-based system that can be tracked through the brand’s app or website. Reward members earn 10 points for every $1 spent. When a user hit 1,250 points, he or she gets a free entrée.

Curt Garner, chief digital and information officer at Chipotle, said the loyalty test is part of the company’s goal to make the brand more accessible.

This is the first digital rewards program for Chipotle, which previously had "dabbled" in a punch card system, the company said.

KFC is testing voice technology using Amazon Echo Show devices in a small number of restaurants in the U.S., Canada and Australia.

The test is proving to shorten back-of-the-house training as it allows new employees to work and train at the same time. The device is loaded with the top 100 questions typically asked in the kitchen such as how to rack chicken. It allows for hands-free visual training from the Echo Show monitors.

Ryan Ostrom, global chief digital officer for KFC, said it normally takes about 4 to 8 weeks for an employee to become efficient on back-of-the-house duties. With the Echo Show training, workers become competent in one week, he said.

Domino’s Pizza has been one of the biggest innovators when it comes to technology.

And the brand is always doing it with a fun twist. Whether it’s ordering your favorite pizza through Twitter,  or tracking your order on your phone.  Customer-facing innovations have helped build strong sales for the brand.

The latest tech twist leans more on fun, than efficiency. In late September, the chain introduced the dinner bell function on Domino’s mobile app. It’s aimed at “getting everyone’s eyes off their device and over to the dinner table,” Domino’s said. 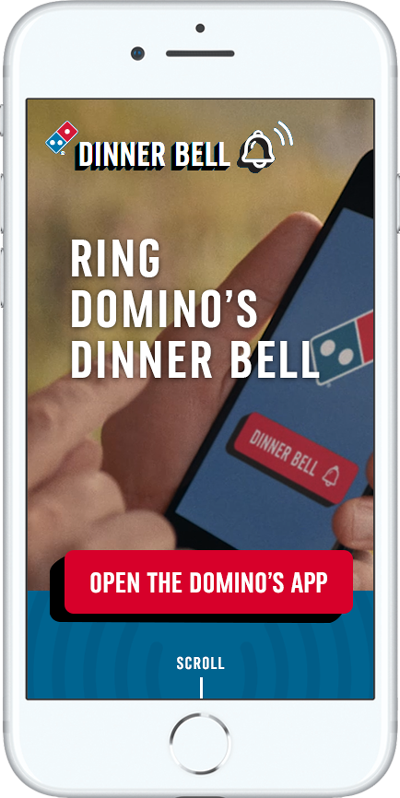 Dennis Maloney, Domino’s chief digital officer, said the virtual dinner bell rings everyone in a family or group to let them know dinner is ready. Customers can create a dinner bell group using the restaurant’s app. Once an order is placed, the group leader has the ability to “ring the bell to notify family and friends that the order has been placed.”

Then, when the order is out for delivery, the dinner bell will automatically ring the group to remind them to head for the dinner table.

“Let’s face it, sometimes yelling at everyone that pizza is here just doesn’t work,” Maloney said in a statement.

Foodsby Inc. recently secured $13.5 million in Series B funding bringing total funding to $21 million. The investment will drive the company’s expansion to new markets outside its core base.

The six-year-old Minneapolis-based company takes the co-op approach by offering food delivery to office buildings from a network of local restaurants such as Salata, McAlister’s Deli, On the Border Mexican Grill, Schlotzky’s, Zoës Kitchen, Granite City Food & Brewery and Smashburger.

Deliveries from each restaurant in the network are combined and delivered to employees ordering from the same office building.