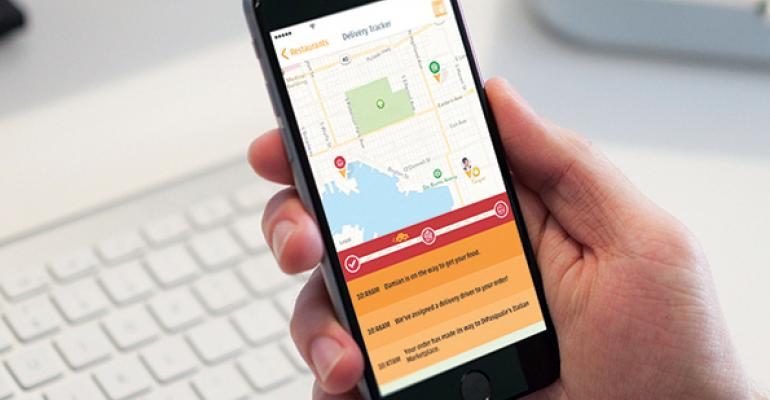 As consumers increasingly look for dining on demand, a rapidly changing landscape of third-party delivery providers is jockeying to tap the growing $70 billion takeout and delivery business.

Blame Uber and Lyft, disruptors of the taxi industry that have created a fleet of independent contractors using their own cars and ride-hailing apps. The new wave of delivery providers have borrowed the same model, using sophisticated technology that gives virtually anyone with a car the chance to earn money connecting diners with their restaurant meals.

The result has been a proliferation of third-party providers who are likely to offer better rates for restaurants as they strive to offer more delivery options to guests, said Lacy Morris, vice president of information technology for Johnny Rockets, which now offers delivery in some markets.

“Technology is really driving this, and there are more players doing the quality that you need, so that’s lowering fees,” Morris said. “It eats away at margins, but because the market is demanding this service, you have to be prepared to surrender part of your share for that.”

One such provider is Postmates, which has been in the spotlight, with McDonald’s, Starbucks and Chipotle Mexican Grill recently announcing partnerships. Several others are also poised for national growth, fueling the delivery wars.

DoorDash was born in Palo Alto, Calif., about a year ago, and already the service is available in 52 cities. The company expects to reach 120 cities before the end of the year, including 20 major metropolitan areas.

Baltimore-based OrderUp, founded in 2009, is in 35 cities, with a focus on second-tier markets like Charlottesville, Va., Santa Barbara, Calif., and Denver.

Uber offers food delivery in New York and Chicago, and is testing an expansion of that service in Los Angeles called UberEats.

Caviar, which operates in 18 markets across the U.S., was acquired by payment provider Square last year. Food Lovers United Co., known as FLUC, is growing out of the San Francisco Bay area. And chef David Chang is attempting to own the process from kitchen to consumer with a delivery-only restaurant in New York called Maple.

As a result, longtime players like GrubHub Inc., which merged with Seamless in 2013, are also broadening their skills.

GrubHub/Seamless is a leading provider of digital ordering services, with 35,000 restaurant partners, allowing guests to browse menus, order and pay online or via mobile app for delivery, although the actual movement of food from point A to point B was left to the restaurants.

Earlier this year, however, GrubHub acquired delivery providers Restaurants on the Run and DiningIn, and the company plans to move further into owning that “last mile” of delivery and becoming more of a one-stop-shop. GrubHub now delivers food in more than 15 cities, including Los Angeles, Chicago and San Francisco, with more to come.

Pressure on restaurants to deliver is only expected to increase.

Google recently launched a delivery icon that shows up in search results for restaurants that offer delivery.

Guests can tap the truck-shaped icon and are given a selection of delivery services to choose from before they are taken to the restaurant site to order. Initially, delivery service providers will include GrubHub/Seamless, Eat24, Delivery.com, BeyondMenu and MyPizza.com, but more will be added in time, the company said.

Despite such pressures, most restaurant operators are not likely to invest in hiring, managing and insuring their own delivery drivers – especially with the growing number of players offering third-party services.

Restaurant delivery services have been around for decades. What’s new in delivery is being driven by consumer demand and their growing dependence on smartphones.

“It’s a fundamental shift not only in the way consumers engage with brands, but also how they view convenience,” said Prahar Shah, head of business development for Palo Alto, Calif.-based DoorDash.

Once upon a time, consumers saw the drive thru as the ultimate in convenience.

“Now it’s about clicking a button on their computer,” Shah said. “You’re one click away from convenience.”

Dining out might require waiting for a table, then waiting for food at the table and waiting for the check, Shah said. A growing number of consumers today are saying, “I love the quality of food at my favorite restaurant but I love it even more sitting on my couch watching Netflix,” he said.

What disruptors like DoorDash, OrderUp and Postmates bring to the table is technology that will allow such companies to build scale.

First there’s the website or mobile app, which consumers can use to browse various restaurant menus to decide what they want and place their order. The platforms are tailored to specific cities or neighborhoods.

These providers use independent contractors as drivers who use their own cars and pay for their own insurance, maintenance and gas. Sophisticated algorithms locate drivers near the restaurants and determine the best routes, giving consumers estimated delivery times depending on a number of varying conditions, as well as tracking capabilities.

Ordering and payment is all done online or through mobile apps, including the tips, so drivers do not handle cash or credit cards. Most have no minimum order requirements.

The cost for consumers is generally a flat delivery fee, though some providers may also charge a service fee to consumers if the restaurants negotiate a lower commission.

The commissions that restaurant operators pay generally range between 15 percent and 30 percent of the order, depending on the market and the deal with the delivery provider.

For brands like the five-unit Asian Box, which was born in the same tech-savvy stew in Palo Alto that has given rise to many delivery disrupters, delivery is a crucial component of the restaurant experience, and one that CEO Frank Klein has thought hard about.

One challenge has been ensuring Asian Box’s positioning as a highly customizable, cooked-to-order concept translates on the provider’s Web platform.

“Just because they are picking up and delivering doesn’t mean the management aspect of delivery is totally abdicated,” Klein said. “Restaurants need to recreate the experience for the customer through the vendor and that can be challenging.”

Some providers also mark up prices on the menus listed on their consolidated websites, which could give consumers a wrong perception of a concept’s actual pricing, he said.

Incoming orders are also a trouble spot. Most providers place an iPad in restaurants through which delivery orders come in, though some call or fax in orders. Someone at the restaurant has to transfer that order into the point-of-sale system, which can take labor and effort away from existing customers during peak hours.

That will change, Shah said. DoorDash is looking to integrate directly with restaurant POS systems, but it’s difficult to scale, given how fragmented the payment industry is. Even restaurants within the same chain may not use the same POS, and some may not have a POS at all.

Klein said third-party providers also vary in how they reimburse restaurants. Some pay weekly, others monthly.

“Restaurants that need the cash flow or can’t manage their books will have some navigating to do,” he said.

Since the early days, Klein has also had concerns about the independent drivers used. Most providers ask them to wear a uniform shirt to be easily identifiable to both the restaurant operator and the customer, but that doesn’t always happen.

“The companies at times don’t do the best job policing uniforms, appearance, etc., and that’s still a big concern for us,” Klein said. “One company had a ‘driver’ who was actually a guy in spandex, sweating profusely and delivering out of saddlebags attached to the back of his bike. We stopped that as soon as we saw it.”

With technology giving rise to ease of delivery comes other risks.

Reports from GeekWire and other news sites indicate that provider OrderAhead has been setting up rogue websites using restaurant names and offering delivery, although the restaurant operators never gave consent.

Customers order food for delivery through OrderAhead, which then orders from the restaurant without revealing they work for a delivery provider. The food is delivered to customers at a markup, according to the reports.

In some cases, the fake websites outrank the restaurant’s official sites in Google search listings.

Despite the challenges, offering delivery is increasingly a necessary service, Klein said.

“We can do 40 deliveries in a day at some stores, so it’s not a business I want to give up,” he said. “This is an emerging business that is snowballing across the country. Every time something is emerging, there are going to be issues that need to be figured out. It’s growing pains.”

David Sass, general manager at LYFE Kitchen in Palo Alto, agreed, saying his restaurant works with a number of different delivery providers that meet specific needs. Some are better for delivering catering orders, while others offer the marketing benefit of being included on digital ordering platforms.

Sass said his restaurant has been enjoying double-digit sales increases over the past two years, and there’s little room to grow sales from within the four walls. Delivery and takeout represents about 20 percent of sales, and that can be expanded with third-party providers.

“At the end of the day, if you’re paying about 20 percent in commission, it’s like a 20-percent-off coupon that brings in new guests,” he said. “Delivery providers are only getting paid on orders they bring you.”

For operators like Susan Sarich, CEO of bakery chain SusieCakes, websites like that of DoorDash offer a marketing boost by putting the bakery in mind for delivery customers, as well as handling the ordering and payment aspect.

“We started seeing a tremendous amount of pick-up business we didn’t normally have on off peak hours,” she said.

That’s also true for brands like the six-unit Fat Jack’s Supersubs in Denver, which does about 50 percent of sales in delivery with their own in-house crew of drivers.

The brand’s listing on OrderUp, however, offers the digital marketing and ordering and payment aspects that the family-operated business wouldn’t otherwise be able to offer guests, said Megan Adams, Fat Jack’s marketing director.

Operators like Klein at Asian Box and Morris at Johnny Rockets said their respective chains will also soon debut their own mobile apps with ordering and pay-ahead features.

Even with delivery as a feature of mobile ordering, the chains will still have to rely on third-party providers for the last mile of getting food in the hands of guests.

Morris said Johnny Rockets is not moving away from traditional delivery providers like Takeout Taxi, GrubHub and Eat24, which have a significant market presence in many major cities and maintain brand equity with consumers.

“There doesn’t seem to be any cannibalization. They all seem to have a different service models or footprint,” Sass of LYFE Kitchen said.

With even quick-service players increasingly getting into the delivery game, it’s clear that many believe customers are willing to pay more for food on demand.

At Asian Box, for example, a meal that would be $9 in the restaurant can become a $20 ticket with delivery, but that doesn’t appear to deter customers, Klein said.

At SusieCakes, customers are perfectly willing in some markets to pay a $5 flat rate to have a $3.25 cupcake delivered, although it’s typically a whole cake for a last-minute office birthday party or an impromptu celebration, Sarich said.

“It’s a huge win for restaurants,” Sarich said of the delivery trend. “Even with the commission you pay, it’s incremental business you wouldn’t otherwise see.”