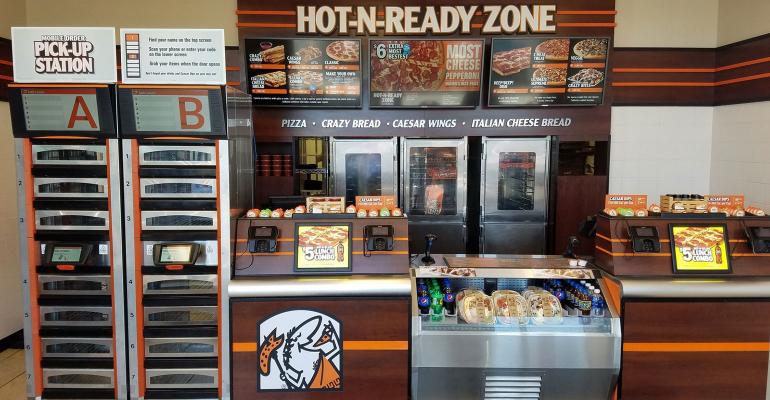 Little Caesars Enterprises Inc. is testing a new Reserve-N-Ready platform that allows customers to order and pay via mobile devices and pick up their pizzas from an automated, self-service station in the unit.

The test of the Reserve-N-Ready service, which features a heated, self-service pick-up station called a Pizza Portal, launched Monday in Tucson, Ariz., said Tina Orozco, communications director for the Detroit-based company. It will be expanded to other markets later this year. Click here to watch a video explaining how the Reserve-N-Ready platform works.

"The genuine purpose behind integrating advanced technology into our stores is all about improving the customer experience and building on our convenience and quality," said David Scrivano, Little Caesars president and CEO, in a statement.

The service allows customers to place an order and pre-pay via the Little Caesars mobile app. The app notifies them when the order is ready.

When patrons arrive at the store, they can skip the line and go directly to the Pizza Portal, where they log in a three-digit personal identification number or scan a quick response, or QR, code on their mobile device, the company said. The code or scan opens the door on the customers’ secured compartments.

Similar compartment-style orders were pioneered with the automat and in 2015 resurrected with a high-tech twist by Eatsa, which has locations in San Francisco and Los Angeles.

In the most recent Nation’s Restaurant News Top 100 census, Little Caesars ranked No. 19 among chains, with an estimated $3.6 billion in U.S. systemwide sales at about 4,294 domestic units.

Little Caesars has locations in 22 countries and territories.