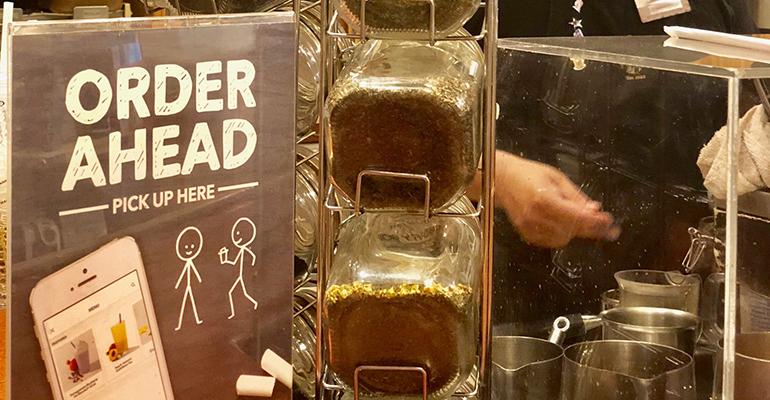 App lets users pay ahead and skip the line, and is integrated with Uber

Pay ahead ordering, made available through the company’s app, allows customers to skip the line at the counter. Starbucks and Dunkin’ Donuts have both offered pay ahead programs nationwide since 2015 and 2016, respectively. The feature will extend to franchise stores and new locations in the coming year, the company said.

“When people want coffee or tea, they want it now and we want their orders to be ready when they are,” Aidan Hay, senior vice president of operations, said in a statement.

In a different twist, the app is integrated with Uber “allowing guests to get to their favorite The Coffee Bean & Tea Leaf store with the tap of a button inside the app,” the company said.

Last year, Irvine-based Taco Bell offered a similar program using Lyft. Dubbed Taco Mode on the Lyft ridesharing app, it allowed passengers to tack on a trip through a nearby Taco Bell drive thru. Taco Bell said it was a huge hit when tested last year in Orange County, Calif.  It’s unclear if they plan to bring it back.

Giving on-the-go consumers the ability to order food on demand has become crucial to an industry facing sluggish foot traffic.

After a one percent increase in foot traffic in 2015, visits to the restaurant industry have been flat the last two years, according to a March report by The NPD Group.

But mobile ordering and delivery apps are a bright spot, the market research firm said.  Restaurant visits paid by mobile app increased by 50 percent over the last year, NPD said.

“Providing the ability to easily order food from a restaurant is no longer a nice-to-have, it is a need-to-have,” Warren Solochek, NPD’s senior vice president of industry relations, said in a statement.

Coffee Bean, founded in 1963 in Southern California, operates more than 1,200 cafes across the world.