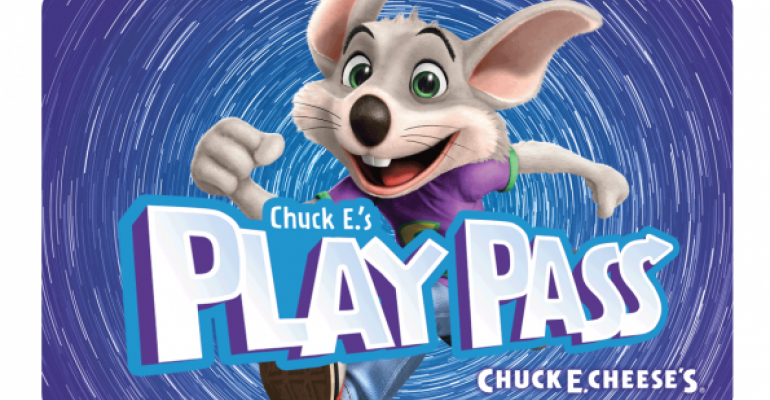 Chuck E. Cheese's has phased out its iconic game tokens for tap-to-play cards, with the new Play Pass technology now in about 200 of its 746 restaurants, the company said this week.

Irving, Texas-based CEC Entertainment Inc., parent to the Chuck E. Cheese’s and Peter Piper Pizza chains, said it will roll out the Radio Frequency Identification, or RFID, technology in its remaining U.S. company-owned Chuck E. Cheese’s units through 2017. By the end of 2017, Play Pass will be in 511 stores, the company said, excluding its franchised, Canadian and Peter Piper locations.

“We've been talking to parents and kids, and they're embracing the new Play Pass system," said Tom Leverton, CEO at CEC Entertainment, in a statement.

Operationally, the RFID technology has given the company new tools to provide a better customer experience, he said.

"We're able to easily monitor which games aren't being played as much and switch them out for new or more popular games,” Leverton said. “This is a whole new level of customer service that we're really excited about.”

Leverton, in a June interview at CEC headquarters, also said the new RFID technology is more hygienic than the tokens, which get pass through many young hands during the course of the day. “What we’re hearing from moms: ‘It’s clean,’” he said.

The programmable cards also allow CEC to offer discounts during certain times of the day or the week, including "Unlimited Play” as part of the Chuck E. Cheese’s birthday packages and “Half Price Tuesdays,” when game prices are reduced to incentivize mid-week visits.

In addition, the cards allow CEC to provide a loyalty program with rewards.

Chuck E. Cheese’s games still give out tickets that are redeemed for prizes.

“Our guests have enthusiastically accepted the new cards as a replacement to tokens," said Mahesh Sadarangani, CEC’s senior vice president of strategic initiatives. "The benefits of Play Pass are endless, beginning with discounts and rewards we can program on the card, and no more token jams.”

Parents and children can also keep track of their game-point totals and recover cards if they are lost, the company said.

Chuck E. Cheese's is not charging a fee for the Play Pass cards, but each unit sells coil bracelets so parents can attach the cards to their children’s wrists.

Chuck E. Cheese’s began testing the game cards in December 2014 in Killeen, Texas, and expanded the program in November 2015 to 40 restaurants.

The company has been expanding the program to its company-owned restaurants this year.

CEC Entertainment owns and franchisees 598 Chuck E. Cheese's and 144 Peter Piper Pizza stores in 47 states and 11 other countries and territories.

Clarification Dec. 2, 2016: This story has been edited to clarify the Play Pass locations are at company-owned units.