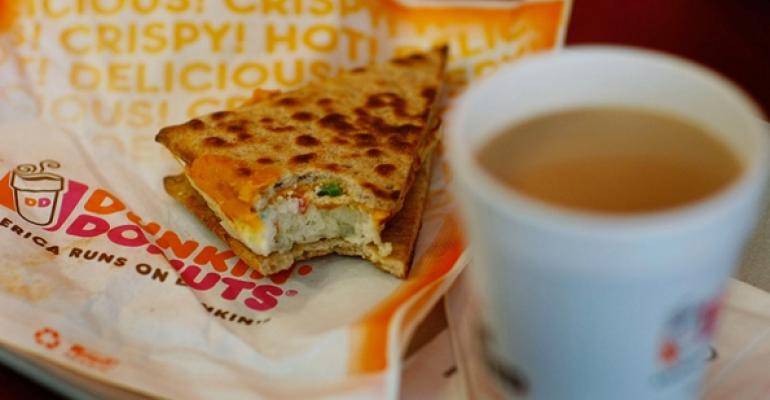 Dunkin’ Donuts has committed to acquiring all of the eggs served on its domestic menus from cage-free sources by 2025, the company said Monday.

The snack and beverage division of Canton, Mass.-based Dunkin’ Brands Group Inc. expanded its cage-free egg commitments over the next 10 years in an announcement coordinated with the Humane Society of the United States, which said the switch would affect about 1.4 million egg-laying chickens a year.

A number of other quick-service and fast-casual restaurant companies have made similar commitments over the past year.

Dunkin’ Donuts began its transition to cage-free eggs in 2012, but ramped it up in March with a commitment to have 10 percent of the eggs used in Dunkin’ Donuts breakfast sandwiches cage free by the end of 2016.

“We have a responsibility to ensure the humane treatment of animals, an issue we know is also important to both our franchisee community and our loyal guests,” Christine Riley Miller, Dunkin’ Brands senior director of corporate social responsibility, said in a statement.

Dunkin’ also pledged to map its international supply chain to determine whether it can transition to 100-percent cage-free eggs in its global operations as well. Dunkin’ has more than 11,500 restaurants in 40 countries.

“We are proud to continue our efforts towards sustainable sourcing and are committed to our partnership with the Humane Society of the United States to help the egg industry eliminate the use of cages in our supply chain,” Miller said.

Irvine, Calif.-based Taco Bell, a division of Yum! Brands Inc., pledged in November that it would use only cage-free eggs at its 6,000 domestic units by the end of 2016.

Oak Brook, Ill.-based McDonald’s Corp. said in September that it would switch to cage-free eggs within its 16,000 units in the United States and Canada over the next 10 years. McDonald’s said it buys more than 2 billion eggs each year. Since 2013, 13 million of those have been from cage-free sources, the company said.

St. Louis-based Panera Bread Co. said in November that it was working toward a goal of offering only cage-free eggs in domestic units by 2020. That includes shell eggs, hard-boiled, liquid egg whites and those used in recipes — more than 120 million eggs systemwide annually, the company said. About 21 percent of Panera’s eggs were cage-free this year.

Panera defined “cage-free” as eggs from hens raised in “indoor barns that allow full range of movement.” The company said its eggs also come from chickens that have never been treated with antibiotics and have consumed a vegetarian diet.

Burger King was among the first national restaurants chains to announce a move toward cage-free eggs, in 2012, with a goal of having its supplies cage-free by 2017. Starbucks Corp. has set a goal of all cage-free eggs by 2020.

The cage-free movement began as far back was 2007, when Charlotte, N.C.-based catering giant Compass North America said it would switch in 90 days to cage-free farms at all 7,500 of its foodservice accounts.