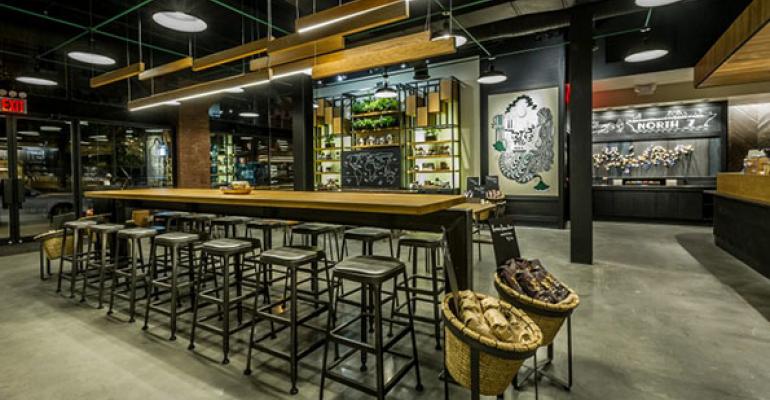 Starbucks Corp. is expanding its premium Reserve brand to 500 units worldwide that will offer the micro-lot coffees and proprietary brewing techniques at a Reserve Bar within the coffeehouse.

In addition, a flagship Starbucks Reserve location is scheduled to open before the end of 2015, which will be designed to spotlight the small-batch line of coffees and specialty brewing methods, said Howard Schultz, the Seattle-based operator’s chairman and CEO, although details of the concept were not revealed.

In a call with analysts following a strong second quarter, Schultz said the new Starbucks Reserve Roastery and Tasting Room, a small-batch coffee roasting site that he has dubbed the “Willy Wonka of coffee,” has been a tremendous success since it debuted in Seattle four months ago.

The 15,000-square-foot, ultra-modern roastery will be replicated, with a second unit planned to open in 2016, in a city in Asia that will be revealed later this year, Schultz said.

The Roastery has given birth to the Starbucks Reserve line of ultra-premium, limited-availability coffees, which are now available at more than 1,000 Starbucks locations. Customers can buy them for home brewing by online subscription.

Select units that will be dubbed “Starbucks Reserve” stores will add a Reserve Bar that will “showcase the most premium of all super-premium coffees in the world and the newest coffee brewing methods,” including pour-over, siphon and the proprietary Clover technology, Schultz said.

The Reserve units, which will be converted as routine renovations come up, will also incorporate Teavana kiosks to leverage growing consumer interest in super-premium, loose-leaf teas, he said.

The premium positioning will help the 22,088-unit chain compete directly with the growing number of specialty coffee concepts popping up across the country.

The move also comes as Starbucks is poised to roll out iOS-based mobile ordering and payment nationwide later this year, before the holiday season, which will let users skip waiting in line to order. Once mobile order and payment is up and running, the chain plans to add a delivery feature.

Schultz said mobile ordering and payment is now available at about 650 locations across the Pacific Northwest and has been “extremely well received” by customers. The feature has resulted in shorter lines at locations, faster service, and improved and more efficient store operations and execution, he said.

Mobile ordering and payment is also driving incremental sales, with increased food attachment and transactions, and has expanded capacity at peak hours, Schultz said. It also has the “flywheel” benefit of building the chain’s loyalty program.

The My Starbucks Rewards loyalty program now has more than 10 million members, adding 1.3 million in the second quarter alone. In addition, customers loaded $1.1 billion onto Starbucks cards during the quarter, a 19-percent increase year over year, Schultz said.

More than 16 million customers are active users of Starbucks’ apps, including the existing app that allows guests to pay in units via smartphone. The company processes more than 8 million mobile payment transactions per week.

Mobile ordering and payment will also be launched in the United Kingdom and Canada before the end of the year, and the chain will add an Android version of the app.

Kevin Johnson, Starbucks’ president and chief operating officer, who joined the company earlier this year, said the 7-percent increase in same-store sales in the Americas region was driven in part by the success of Flat White coffee, as well as cold-brewed iced coffee, which debuted during the quarter.