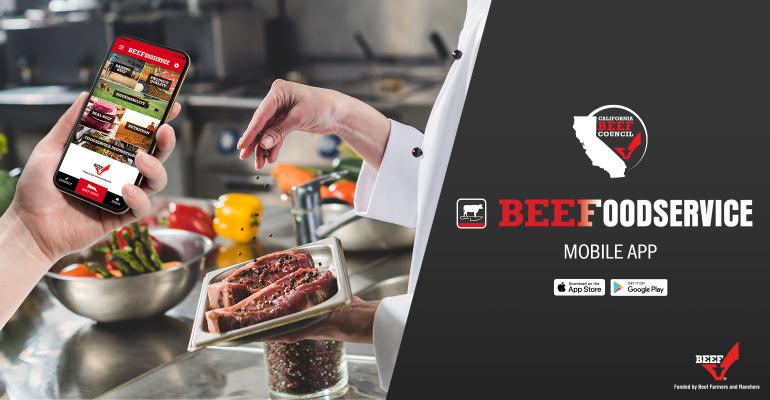 Few animals present more opportunities for menu variety than beef cattle. Their size, weight and diverse musculature ensure few chefs will ever exhaust the culinary potential of this species.

Yet despite all that creative capacity on offer, restaurant menus won’t reflect that range of options if chefs merely gravitate toward cuts and preparations they know. Better beef education can change that, though, and a new mobile app has been created to do just that.

More than a year ago, the California Beef Council (CBC) gathered multiple chefs to ask what more they needed to know about beef, and how that information could improve its existing BEEFlexible app. According to Todd Fisher, director of culinary for the Carmel, Calif.-based Folktale Group, not only did chefs request more information on basics such as beef cuts, preparation techniques and product yields, they asked for talking points about broader issues regularly raised by customers. Curious and knowledgeable diners, they said, ask often about how beef cattle are raised and fed, as well as the industry’s carbon footprint, greenhouse gas emissions and sustainability efforts.

The CBC’s response to those requests is an all-new BEEFoodservice app available for iOS and Android smartphones and tablets. The free app provides the following resources and more:

A tool in a ‘virtual knife roll’

Knives, tongs and whisks will forever remain personal essentials for cooks and chefs, but Fisher said tech tools like BEEFoodservice are increasingly as important. Chefs working with smaller staffs and constant turnover need easy-access training tools that can be kept on cooks’ mobile phones and other devices. Fisher said Folktale recently migrated its “kitchen bible” of recipes to tablets that remained in-house. Now, knowing that anything beef related will be just as readily accessible alongside that is a plus.

“For me, it’s going to be a reference guide, a beef thesaurus and another tool in my virtual knife roll,” he said. “For our staff, it’s going to become a much larger source of information.”

Like most chefs, Fisher’s staffs have varying degrees of culinary knowledge. Some would understand his use of “teres major,” while others “who might be new to the industry would say, ‘Excuse me?’” he said. “I’ll be able to direct them to the app to learn what that is, how we break it down, why it’s seared versus grilled.”

He'll also be able to direct Spanish-speaking only cooks to areas of the app.

“That translator is particularly helpful to chefs here” in southern California, he said.

For the front of the house also

As diners increasingly question servers about ingredient origins, beef-related queries are always part of the discussion. Fisher said that the BEEFoodservice app can equip front-of-the-house staff with answers to those questions virtually ensures it’ll become part of server training at Folktale Group. Having correct answers at the ready increases their professionalism, he said, by allowing them to rely on him less for that information.

“If a server can tell the story of where our beef comes from, how it was raised and how we prepare it, that shows we’re informed,” Fisher said. The BEEFoodservice app also has specific pages to explain the beef cattle lifecycle, the differences in grass-fed and grain-and-grass-fed beef, and how animals are raised with or without antibiotics. “There’s so much information to share with our staff and customers that’s right on their phones.”

Though a veteran chef, Fisher expects that having at-a-glance beef cuts charts on his phone will be a creativity booster to him. Despite having a cuts chart on the wall where he works, it’s easy to walk past it without stopping to consider his options for the next menu overhaul. Having those charts on his phone to view when the muse strikes will help, he added.

“That gives me a chance to think, ‘I haven’t done eye of round in a long time, and that would be great to use in a sandwich I’d like to put on the menu,’” he said.

Using the BEEFoodserivce app’s weight and yield charts will be a time and money saver, too.

“It’s critical to save every penny you can by getting every ounce of meat off the bone,” he said. “Having those tools makes it like having a textbook on your phone.”

Need to educate your staff on beef creative options and delicious possibilities? The BEEFoodservice app is available now to download free on Apple’s App Store and the Google Play Store.