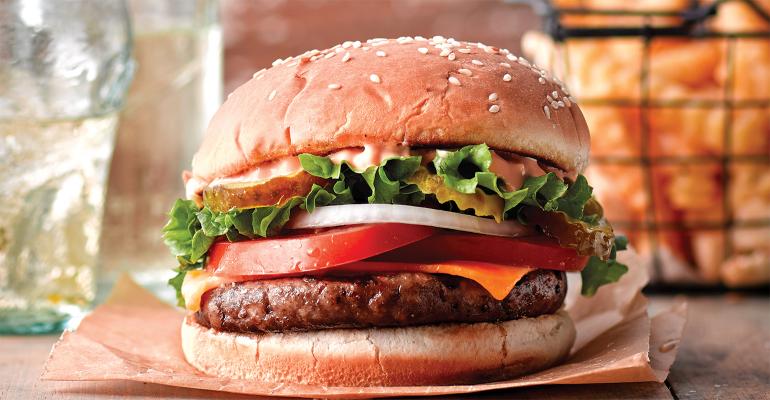 It’s all in the mix

As more Americans gravitate toward healthful menu choices that are flavorful, inventive and contain less meat, operators are turning to plant-forward foods to cater to this growing trend. While many of these customers do not choose to exclude meat from their diets altogether, they are looking for variety and new iterations of their favorite meat-based dishes. As a result, foodservice operators are finding they can appeal to this group of flexitarians by offering blended meat and plant-based foods.

More than half of the top 100 fast-food chains in the U.S. offer some plant-based options, according to the Good Food Institute. Nor is the trend limited to these quick-service concepts either, as foodservice establishments in every segment from fast casual to fine dining are showcasing plant-based choices as well as plant-forward foods that include produce, beans and seeds. These dishes appeal to customers who are looking for better-for-you ingredients—consequently innovative operators are devising new ways to offer a variety of meat and meatless foods, often on the same plate.

“As the trend advances toward meat limitation, rather than elimination, predominant eating patterns will depolarize from extremes and head toward well-rounded diets,” the study finds.

In their quest for balanced choices and well-rounded diets, consumers are opting for both meat and plant-based solutions. In fact, Whole Foods named meat-and-plant blends one of the top 10 food trends for 2020, noting that “butchers and meat brands won’t be left out of the ‘plant-based’ craze in 2020.”

For several years now, burgers that combine both beef and plant-based ingredients have been among the most popular examples of the blending trend. Mushrooms were the plant-based ingredients most often incorporated into these blended burgers. But today's operators are featuring other blendable ingredients, such as beans, in the patties. Beans are a superfood, and a plant-based protein. Offering these are a logical extension of veggie burgers that have long been the go-to menu item for consumers seeking an alternative, protein-packed burger prepared with recognizable, wholesome ingredients.

According to a survey conducted by Informa Engage and Nation’s Restaurant News with Bush’s Best, most operators menu vegetarian, vegan, plant-based or meatless options. When asked about these, 81 percent of menu influencers and 71 percent of non-influencers, said they offer these items. Also, 54 percent of menu influencers and 40 of non-influencers say they use a combination of items prepared in-house and supplied plant-based items. For example, Bush’s Beans features Bush’s Best Blended Burger, which contains 60 percent beef, 20 percent beans and 20 percent mushrooms.

Meanwhile, operators are coming up with their own iterations of blended burgers:

Nor are beef burgers the only menu items that incorporate plant-based ingredients. Some suppliers are offering chicken-cauliflower patties, or chicken with peas or chickpeas, instead of traditional chicken burgers.