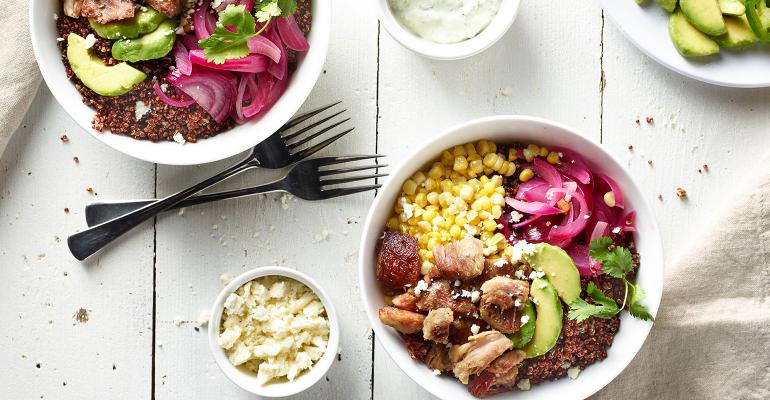 For decades, a subsegment of restaurant customers has requested meat items made from humanely raised animals. As information about the health and environmental benefits of raising animals on pasture, without antibiotics or added hormones, has increased in volume and accessibility, the desire for “clean meats” among consumers and chefs has also increased noticeably.

“Though overall it’s still a niche segment of the total restaurant consumer base, you can see demand growing everywhere,” says Jared Koch, an author and wellness consultant. After penning the book, “Clean Plates N.Y.C.: A Guide to the Healthiest Tastiest Restaurants in Manhattan,” Koch founded a New York City wellness consultancy named Clean Plates. “Look at Costco. It’s one of the top sellers of organic foods in the country. They sell lots of hormone- and antibiotic-free meat. When you have companies like Costco and Whole Foods doing it, that’s significant.”

But while menu developers at many restaurant chains share those “clean meat” values, finding adequate supplies isn’t always easy. Farms certified for higher animal welfare (animals raised on pasture, on vegetarian diets and without unnecessary antibiotics) typically are in decentralized rural locations. That they also don’t produce enough meat to serve as sole suppliers for an entire restaurant chain forces buyers to rely on a network of farms to move smaller meat supplies to locations sometimes spread far and wide.

Despite those challenges, several chains are succeeding at this. Chick-fil-A announced in 2019 that it achieved its goal of having a “no antibiotics ever” line of chicken products. In 2021, 60-unit Farmer Boys began using all-natural chicken, free of added steroids and hormones, on its sandwiches. When Chipotle Mexican Grill was less than half its 2,750-unit size, it committed to serving only pork made from no antibiotics ever and humanely raised hogs. To prove its commitment to that cause, the chain briefly suspended the sale of pork at hundreds of units after discovering a supplier didn’t meet its animal welfare standards.

“People are really concerned about animal welfare, environmental health and the overuse of antibiotics,” Koch says. “As more [clean meat] suppliers are coming online and quality rises, you see a lot of chefs—especially younger up-and-comers—willing to source those ingredients.”

Blake Flores, National Sales Manager for Applegate Foodservice, says Applegate began its foodservice businesses in 2018. Since then, sales have grown by double digits each year. After launching with a basic line of clean bulk deli proteins like smoked turkey, ham and roast beef, the APPPLEGATE® protein portfolio has expanded to include 25 items such as pizza toppings, breakfast meats, fresh pork and premium prepared proteins.

As chefs’ curiosity and knowledge about clean meats has risen, Flores says their questions about APPLEGATE® Natural & Organic Meats and other clean products in general are increasingly well informed. The company’s ability to point to their 3rd party certification for high animal welfare, “helps us walk the talk. Chefs want to be confident that what they’re telling their patrons is true.”

The “talk” often includes discussions of higher prices for clean meats. Convincing chefs and menu developers that enhanced animal welfare standards and clean label products are worth the cost can be challenging with ingredient prices at historic highs.

“On those small farms you have a high level of care and a low density of animals,” Flores says. “It’s expensive for farmers to provide those conditions to their animals, but for foodservice operators and patrons who care about that, it’s what they want.”

Koch says his health-minded clients understand this and expect to pay more when animal welfare is important to producers.

“Everyone would like those meats to be less expensive than they are,” Koch says. “But what we’ve seen is once people have made the commitment to eating those foods, they say it’s hard to go back to lesser quality—even in an economic downturn like we just went through.”

Mostly, though, Flores says chefs ask about meat options they can use to keep pace with food trends and satisfy wide-ranging customer desires.

“That’s one thing I really like about foodservice: Chefs push the envelope hard and fast because they want to differentiate themselves,” he says. “Restaurant chefs are always looking for what’s next and trying to be on the cutting edge. The APPLEGATE® Brand gives them opportunities to keep pushing the envelope.”

Are animal welfare, clean meats and sustainable farming practices important to your restaurant chain or noncommercial foodservice operation? Contact Hormel Foodservice to learn how we can help you achieve those goals.