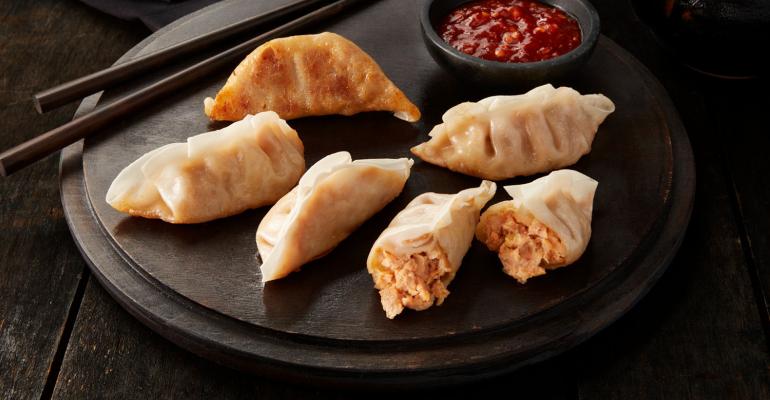 Asian-style dumplings are popular, easy to prepare and profitable

Asian-style dumplings are among diners’ favorites at Japanese, Chinese and Korean restaurants, and now those longtime standards are increasingly migrating onto non-Asian menus.

Not surprisingly, independent restaurants also are well into the dumpling game. Chicago’s Bixi Beer takes a tangy tack with its shrimp, pork, cabbage dumpling served with black vinegar, while Philadelphia’s Humpty Dumplings moves in a decidedly American direction with honey-chipotle chicken and broccoli and cheddar dumplings.

When forced to remove chicken wings from the menu due to high prices, she replaced them with Schwan’s CHEF ONE® Dumplings. Shipped frozen, each case contains three 2.5-pound bags of 0.8-ounce dumplings in varieties like:

“We’re always having to figure out how to make do with ingredients that are now unaffordable,” Immanivong says. “Adding things like dumplings, frying them and tossing them in our sauces—just like we did with our chicken wings—helps us balance what we can produce and do it profitably.”

Removing wings also opened up space in her fryers for dumplings. The dumplings come from the freezer, are fried, sauced and served ready to eat in just three minutes. Steaming CHEF ONE® Dumplings is just as easy, she says.

“With the consistency of CHEF ONE® products, every dumpling looks the same and the fillings always taste delicious,” Immanivong says. Pointing toward her high standards for consistency, she adds, “With these dumplings, I don’t have to worry about whether somebody followed the recipe.”

“If an order for 100 eggrolls comes in, we could be in trouble,” Immanivong says, referring to large transactions coming from student organizations at a nearby university. “But with CHEF ONE® Dumplings, that’s never a problem. We don’t make them. We just order by the case. They’re always ready when we need them.”

Immanivong’s Laotian heritage—her parents emigrated to the U.S.—ensured meals at home were prepared authentically. She said she works hard to preserve those traditions in her restaurant.

“Our kitchen has a window into which people can see what’s going on and what we use,” she says. “I love when people look in, point at an ingredient and ask, ‘Is that for decoration?’ We tell them, ‘No that’s what we use. It’s real.’”

When asked if she views using a premade dumpling as a compromise to those standards, she says, unequivocally, no.

“We’re authentic at Red Stix, but we also customize to our audience,” she says. “I’ve got to keep our menu simple, especially in this environment. I think some people complicate their menus too much.”

“Ego doesn’t pay the bills, and if high-quality frozen dumplings add to the bottom line, I’ll do that all day long,” she says. “This could be a new business model for me: just selling dumplings, especially on our food trucks.”

Popular and easy to cook and serve, CHEF ONE® Dumplings can fit seamlessly into many restaurant operations. Whether the concept is fully Asian-centered, a casual restaurant with a shareable appetizer section, a high-traffic buffet business or a food truck in need of no-prep, quick-cook items, these delicious and savory dumplings will serve well on your tables and boost profits. For more information, visit https://www.schwansfoodservice.com/foodservice-justdumpling/.