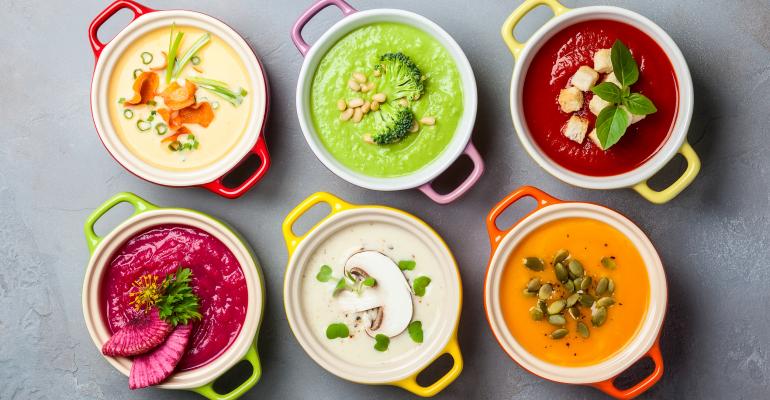 The right soups can generate sales, customer interest, even during the warm spring/summer months.

For many, a comforting, warm bowl of soup is just the thing in the fall and winter. But soup sales often slip once the weather breaks and temperatures climb. Operators can tap into a variety of strategies to strengthen soup orders, not just in the summer, but year-round.

1. Go lighter. Cold soups, broth-based recipes and other less-filling choices cater to smaller appetites during the warmer months. Chilled fruit, cucumber and vichyssoise are options, but the ultimate classic, gazpacho, has become a palette for culinary creativity, says Rob Corliss, founder of All Things Epicurean, a Nixa, Mo., consulting firm. Like tacos, many combinations of fruit or vegetable mix work in gazpacho.

Gazpach-oh! has been a popular summer LTO for Unforked, a fast-casual concept with several locations in the Kansas City, Mo., market. The sweet-savory mix brings together tomato, mango, cucumber, corn, seasonings and fresh avocado, and is served with or without hot seared shrimp or raw chilled cubes of ahi tuna. It’s sold in a clear plastic cup for easy portability.

When basing a soup around fruit, he suggests avoiding a simple puree. “It should have a vegetable or savory element that pulls it together,” he says.

2. Keep ladling out the favorites. Some soups have fans who expect their favorites to be available year-round. “Our tomato soup is very popular, and I think we would have a coup if we took if off the menu,” says Henk Drakulich, vice president and executive chef for La Brea Bakery Cafes. The classic pairing with a grilled cheese sandwich is one of the Los Angeles-based brand’s most popular orders year-round.

Similarly, chicken enchilada — a cream-based house specialty full of diced tomatoes, black beans and corn — is the biggest seller across the calendar for Soup Shop in Melbourne, Fla. Owner Julie Shipley says overall demand at the concept — which features 46 varieties on the menu at all times and sells soup by the bowl, pint and quart — remains steady throughout the year, despite its temperate location.

3. Don’t forget the flavor. Focusing on seasonal ingredients is easier during spring and summer, but flavor should be key. “Anything you do has to focus on the taste of the food,” says Ron DeSantis, principal advisor with CulinaryNXT, a Brandford, Conn., foodservice advisory firm. “The ingredients of the season are always going to resonate and make the soups spectacular,” he says. “But if you’re using broths, for instance, they have to be really balanced in flavor.”

Soups inspired by popular seasonal street foods are one way to capture diners’ imagination and focus on flavor, says Corliss. Mexican Grilled Street Corn Soup, for example, could combine a base of pureed chile-spiked creamy corn with fresh pico de gallo, kernels of juicy raw corn and queso fresco crumbles. Restaurants known for a particular dish or style — barbecue, for instance — can “pull existing equity from something that’s a current menu star and feature it as a soup,” he says.

4. Think outside the bowl. Snacking, takeout and convenience are all trends to consider when designing a soup menu.

According to Technomic’s 2018 Soup & Salad Consumer Trend Report, 17 percent of consumers who choose soup are likely to order it as a snack, up from 11 percent in 2015. Soup Shop enables snackers, samplers and sharers to indulge by offering soup flights — three 6-ounce portions for $7.50.

Selling soup in single-serving to-go containers and offering it in pints and quarts are ways to satisfy takeout customers. But the ultimate in convenience is sippable soup, which by necessity should be relatively thinner and smooth.

Soup can be positioned in multiple menu formats, Corliss says — “as a snack, a starter, an entrée or a meal replacement.” Thicker pureed soups can also stand in as a base for proteins. DeSantis suggests a velvety smooth warm vichyssoise topped with halibut and fresh herbs would make an appealing appetizer.

5. Bring on the broth-based soups. Broths are already in demand for their reported health benefits. Building soups around them is a natural extension that can satisfy lighter appetites in the spring and summer as well as health-conscious diners. For Zoup!, a 90-unit chain that offers a dozen varieties of soup daily, founder Eric Ersher says broth-based soups are among the top sellers throughout the year. Pho and ramen, both essentially broth with the addition of vegetables, proteins and noodles, or the inescapably classic chicken noodle soup, easily fit into this category. A build-your-own option gives diners ultimate control over portion size and ingredients.

Regardless of the season, soup’s appeal is broad-based. “In addition to being a way to explore new ingredients and flavors, soup — unlike any other food category — seems to elicit thoughts of comfort, warmth and well-being,” says Ersher.